Sensitivity and Specificity of Trans-Cutaneous Bilirubinometry versus Serum Bilirubin in Preterm Infants: A Single-Center Experience

Copyright © 2021 Dr. Elsayed Salama, I., et al. This is an open access article distributed under the Creative Commons Attribution License, which permits unrestricted use, distribution, and reproduction in any medium, provided the original work is properly cited.

Results
There was a significant positive correlation between TSB and TcB readings in a preterm infant with gestational age 30-36 weeks regardless the time of testing, also it was found, the best site for TcB measurement was the sternum except in GAII.

Transcutaneous measurement of bilirubin decreases cost, pain and discomfort for the infants and their parents. It is considered easy and rapid method in screening and follow up of neonatal jaundice versus total serum bilirubin measurement.

Introduction
Neonatal jaundice occurring in up to 60% of term and 80% of preterm newborns in the first week of life, and it is a very common condition worldwide [1]. Although the gold standard remains the measurement of TSB, this method, however, is invasive, painful and costly in terms of workload, time and money. Moreover, repeated blood sampling may lead to significant blood loss, which may be of concern in preterm infants. Non-invasive methods of bilirubin measurements have been proposed, to overcome these drawbacks.2 Transcutaneous bilirubin (TcB) measurements readings are instant and can avoid delay of discharge and/ or indicate the need for formal TSB testing [2]. The accurate measurement of bilirubin concentrations is essential for the diagnosis of hyperbilirubinemia and for guiding the clinician regarding treatment. Many preferred TSB as a screening test to identify preterm infants at-risk for hyperbilirubinemia, but the clinician should consider using daily monitoring of jaundice progression, by periodic TcB testing, to minimize overtesting and overuse of phototherapy [3,4]. The concern of poorer reliability of TcB with decreasing GA is further heightened because intervention thresholds become narrower with increasing immaturity. As a result, TcB screening is not widely used.3 Thus, it was not recommend for routine use of TcB devices in extremely preterm infants (GA <28 weeks) until there are improved devices with better accuracy and precision, and a clinically validated standardized protocol for its use in preterm infants (GA <35 weeks) [5]. This study was to assess the transcutaneous bilirubin (TcB) measurements in preterm neonates (30-36 weeks) versus total serum bilirubin (TSB) testing. 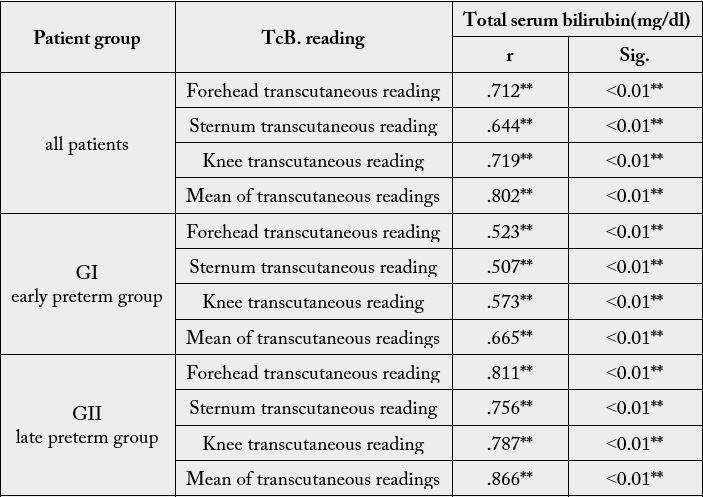 Significant positive correlations are present between TSB and TcB readings in study groups. 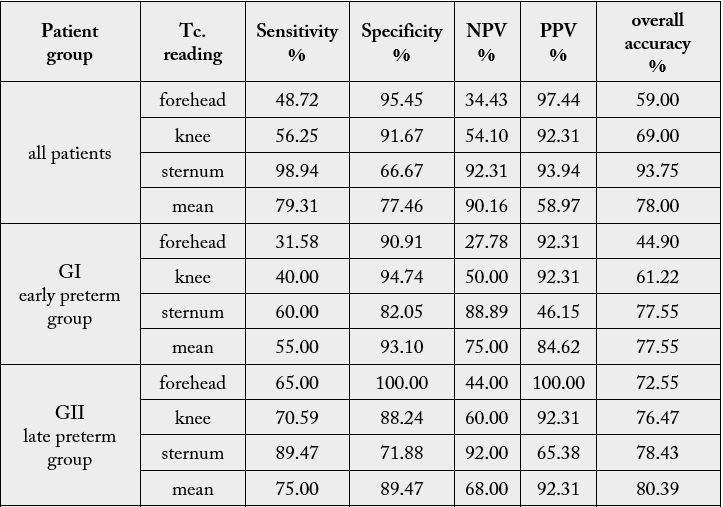 Sternum TcB readings have better results in all groups except GAII

Discussion
The accurate measurement of bilirubin concentrations is essential for the diagnosis of hyperbilirubinemia and for guiding the clinician regarding treatment. This study aimed to assess the transcutaneous bilirubin (TcB) measurements in preterm neonates versus serum bilirubin testing. In this study, transcutaneous jaundice meter measurement, show significant positive correlations between TSB and TcB readings in the preterm infant with gestational age 30-36 weeks (early and late preterm) regardless the time of testing in both groups (GAI and GAII). In concordance of present work, one study of 120 infants (mean age of 90.4 hours), there was a good correlation between TcB and TSB, and they concluded that the use of TcB in the outpatient setting was a safe and reliable screen for assessing hyperbilirubinemia in infants recently discharged [6].

In other study, the maximum correlation between TSB and TcB was seen in 33-37 weeks of gestation and birth weight >2500g, with forehead TcB measurement. There was a significant correlation between TcB and TSB in preterm cases even in ill neonates who received phototherapy. They concluded that TcB can be used for the determination of bilirubin level in the preterm neonates, significanly it reduced the number of blood sampling [7]. Also in concordance with present study, one study for neonatal jaundice in term and late preterm infants in Mongolia, established the validity of the JM-103 meter as a screening tool versus TSB [8]. Transcutaneous bilirubinometry measurements using the Draeger JM-103® device, correlate significantly with TSB and it seems to be a safe and cost-effective screening method for severe hyperbilirubinemia in newborns of different terms and ethnic origins [9]. The use of TcB devices during phototherapy, can be recommended, but further research is needed. In such situation it was found that a moderate correlation between TcB and TSB, with a marginal improvement in the post phototherapy phase [10].

In other side, not concordant with our data, a 2013 systematic review suggested that TcB devices reported similar reliability in estimating TSB in preterm infants less than 37 weeks GA, subsequent data showed that the correlation between TcB and TSB decreases with decreasing gestational age [11-13]. For extremely preterm infants (<30 weeks GA), the correlation of measurements between TcB and TSB also varies depending on the body site used due to differences in tissue bilirubin binding [14]. The concern of poorer reliability of TcB with decreasing GA is further heightened because intervention thresholds become narrower with increasing immaturity. As a result, TcB screening is not widely used [3]. Thus, it was not recommend for routine use of TcB devices in extremely preterm infants (GA <28 weeks) until there are improved devices with better accuracy and precision, and a clinically validated standardized protocol for its use in preterm infants (GA <35 weeks) [5]. In another study of 87 paired measurements of TcB and TSB of term infants ≤ 28 days of age, mean TcB levels were greater than mean TSB (15.1 versus 13.6 mg/dL [258 versus 233mmol/L]). In comparison with inpatient measurements, there was greater variability between TcB and TSB with outpatient measurements. They showed that, the sensitivity of TcB to detect outpatient infants at risk for developing hyperbilirubinemia was 87% and the specificity was 58%. In contrast to our study, the authors concluded that further studies are needed to determine the efficacy of outpatient TcB screening [15]. In outpatient setting, there are limited data regarding TcB’s reliability and accuracy in identifying at-risk infants after birth hospitalization. As a result, before TcB outpatient measurements can be recommended for routine care, further studies are required to determine its efficacy and to optimize standardized protocols for its use [4]. TcB testing may be affected by skin pigmentation, TcB overestimates TSB in infants who are dark-skinned. and might underestimate TSB in light-skinned infants [16]. Other systematic reviews have shown TcB nomogram values vary among different ethnic groups [17,18]. If TcB is used for screening, a confirmatory TSB should be measured in the following settings: When TcB exceeds the 75th percentile on the TB nomogram for phototherapy, If the TcB is within 3mg/dL of the phototherapy threshold levels. At follow-up after discharge if the TcB is >12.5mg/dL (214mmol/L) [19]. At high levels of TB (>15mg/dL [257mmol/L]), TcB measurements underestimate TSB and need to be confirmed by standard laboratory methods. Still, TcB can replace TSB in most circumstances when TSB is <15mg/dL (257mmol/L) [20]. Those dis-concordance with present study, may be due to different ages and different skin colors. Although genetic differences may explain the variation in TcB nomograms, differences in study designs (eg; enrollment criteria, equipment, and frequency of other risk factors [breastfeeding versus formula-feeding]) also may have contributed to the differences in the results. There are also significant variations among different instruments [21,22]. Also the differences in results may be due to personnel time for training and performing the test, and the standardization of testing, such as body location for testing [23].

The present study showed that the best site for measurement (means of three reading) in early and late preterm was sternum, except in GAII. TcB measurements performed on the forehead in an infant who may have been exposed to direct sunlight may not be as reliable as an alternate unexposed site, such as the sternum [23]. In other study, forehead TcB correlated best with serum bilirubin levels but became less accurate at higher values, and still promising, and can be considered for routine clinical application in hyperbilirubinemia of adults [24].

Conclusion and Future Prospective
Transcutaneous measurement of bilirubin concentration decreases cost, pain and discomfort for the infants and their parents, and it is considered an easy and rapid method for screening and follow up of neonatal jaundice in early and late preterm infants. TSB should be measured in critical decisions. The standardization of testing is needed, and further studies, advised, to compare the efficacy of different devices used.

Acknowledgments
To all nurse stuff and my colleges in national liver institute, Egypt.

Conflict of Interest
No conflict