Copyright © 2021 Georges KOZAH, et al. This is an open access article distributed under the Creative Commons Attribution License, which permits unrestricted use, distribution, and reproduction in any medium, provided the original work is properly cited.

Mucinous cystadenoma (MC) of the ovary is a unilateral, multilocular cystic and benign epithelial tumor. We report here a successful surgical management of a large mucinous cystadenoma misdiagnosed as a large uterine fibroid first.

Introduction
Adnexal masses can sometimes complicate normal pregnancy. They are normally discovered by routine obstetric ultrasound examination in normal fetal follow up. Mucinous cystadenomas (MCs) are a benign epithelial tumors that can reach large sizes during pregnancy. In this report, we presented an ovarian MC that measured 28 × 36cm at its longest axis, which was discovered during pregnancy and miss diagnosed as a large uterine fibroma.

Case Presentation
Patient M presented in August 2018, with an 8 weeks pregnancy. The uterus approximately was about 24 weeks pregnancy size and was palpated at the level of umbilicus on abdominal examination, ultrasound showed a live fetus of 8 weeks, with a large mass diagnosed as anterior wall fibroid measuring 13x8cm. The patient was reassured and advised to follow up at 10 weeks, when another ultrasound was done by a radiologist who reported a uterus with a huge subserous fibroid merging from the posterior wall to the RT side of the uterus measured 14.7 x 8.5 x 17cm. Heterogeneous texture with areas of cystic degeneration was also seen. Thereafter she was admitted 2 times to the emergency with severe acute abdominal pain. At the visit for anomaly scan at 20 weeks, ultrasound revealed single live fetus, with placenta anterior and up, liquor normal, all parameters 20-21 weeks with a large subserous fibroid with degeneration above and to the right of the uterus about 16-18cm size. Antenatal follow up was arranged. She was followed monthly till 27 weeks when she was admitted with severe abdominal pain (more in right upper quadrant). On ultrasound she was noted to have a fibroid with red degeneration of approximately 26cm with a short cervix (1.5cm). Antenatal steroid cover was given and she was kept in till 32 weeks as her home was in rural area away from the hospital with no NICU facility. After discharge at 32 weeks, she was readmitted at 35 weeks, and the patient underwent a smooth vaginal delivery with no complications and delivered a healthy baby boy of 2.6kg.

Post-partum abdominal distention persisted the patient was discharged and a follow up was planned after 8 weeks.

After 2 months, she was seen in the Clinic with a mass generally distending the whole abdomen up to 35cm from pubic symphysis. The patient had generalized abdominal pain, she had resumed her normal menstruation and was breast feeding. MRI could not be done as her abdomen could not be entered into closed MRI machine. Ultrasound imaging with radiologist was planned and he suspected a large mucinous cystadenoma. She was then counseled and planed for diagnostic laparoscopy with decompression and minimally invasive removal planned with major possibility of laparotomy and ovarian cystectomy/oophorectomy agreed upon.

On diagnostic laparoscopy through Palmer’s point, a large mass was noted with decompression attempted but no significant aspirate came due to the large density of the cyst fluid, so decision for laparotomy was taken.

A mass adherent to anterior abdominal wall all around engulfing right tube and ovary, weighing 15 kilograms was removed after careful adhesiolysis, identifying and preserving anatomy. Appendectomy was done prophylactically. She was received 1 unit blood due to an estimated blood loss of approximately 700ml. Patient had hypotension due to decompression of large mass, she was started on inotropes and abdomen closed with propene and umbilicus was reconstructed. Mrs. M was shifted to ICU for post op care. She developed paralytic ileus and started oral after 4 days of ICU monitoring, started passing urine and ambulated too. She was discharged on antibiotics for 10 days post-operative and followed up for staples removal. Postoperative pathology showed a collision ovarian tumor with mucinous cystadenoma. 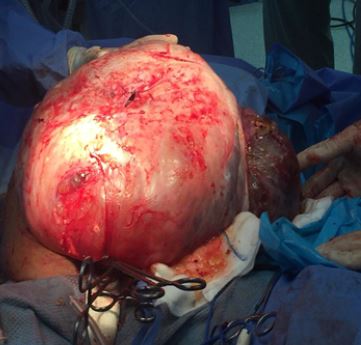 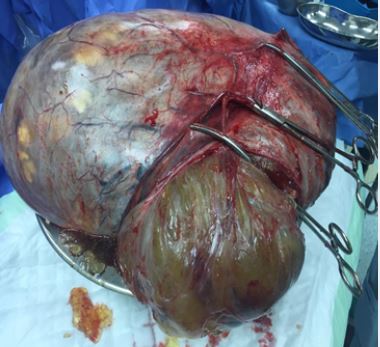 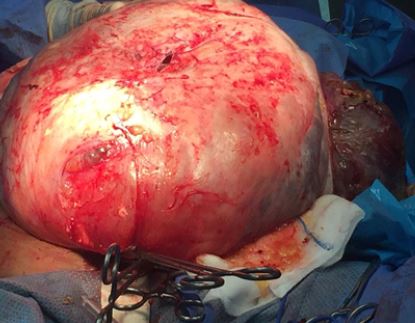 Discussion
The incidence of adnexal masses in pregnancy is about 0.5-2/1000 pregnancies [1]. More than 90% of the ovarian cysts in pregnancy are benign. Physiological cysts are common in the first trimester, and Organic cysts like dermoid are most commonly seen in the second and third trimester. Mucinous cystadenomas are benign epithelial tumors that are multilocular in 80 percent of the cases, they usually have a thin wall with smooth external surface containing mucinous fluid. These are the largest tumors of ovary, and they may reach enormous dimensions. They are benign in in 75% of the cases, 10% are borderline, and 15% are invasive carcinoma [2]. The most common complication of benign ovarian cysts during pregnancy is the torsion and necrosis of the cyst and the ovary due to the heavy weight of the cysts. The other complications which might occur are rupture of cyst, infection, malignancy, impaction of cyst in pelvis, obstructed labor and malpresentations of the fetus [3].

An ovarian mass is usually not removed during pregnancy , indications for removal is when there is a potential risk of dystocia , when the risk of torsion, and rupture is very high, or when the cysts has many malignancy futures in the first trimester of pregnancy [4].

Usually if an ovarian mass is diagnosed in the first trimester, it is better to wait till the second or third trimester when the implantation of pregnancy is almost finished.

Ovarian tumors are usually treated by cystectomy or ovarectomy depending on the size of the cysts, the malignancy futures and the age of the women and her childbearing request.

Laparoscopy is the treatment of choice in gravid patients with symptomatic ovarian masses.

The laparoscopic surgery advantages are

In our case, the cyst was huge, 28x 30cm in size and surgery was essential to prevent complications as the torsion rupture or infection of the cysts but successful vaginal delivery was conducted later without any intrapartum or postpartum complications.

There are several case reports in literature showing huge mucinous cystadenomas complicating the pregnancy and they needed emergency surgical intervention as in this case reported by Qublan et al that describe a 6300g multiloculated right ovarian cystadenoma measuring 33x24x20cm at 38 weeks of pregnancy associated with intra uterine growth retardation (IUGR) and malpresentation [6]. In our case despite the larger size of mass and the preterm labor , there was no growth retardation , and the presentation of the baby was always cephalique.

There are some reports of mucinous cystadenomas also causing virilization during pregnancy that was only cured by the removal of the mass [7,8].

After reviewing different studies we concluded that ovarian cyst in pregnancy must be followed-up properly. Early diagnosis and appropriate intervention is associated with best fetomaternal outcome [9,10].

Conclusion
There are many reported cases of huge ovarian tumors that reached this size. But this case shows the difficulty of the management of a gynecological tumors in a pregnant woman. Care should be undertaken to avoid surgery before the delivery of the baby while ensuring the observation of the patient during her pregnancy while delaying invasive measures to the early postpartum period if possible.