Copyright © 2018 Dr. Taremwa Ivan Mugisha, et al. This is an open access article distributed under the Creative Commons Attribution License, which permits unrestricted use, distribution, and reproduction in any medium, provided the original work is properly cited.

Establishment of haematological ranges is key to laboratory diagnoses and management of pregnancy related complications. The parameters to a large extent ought to be population based, never the less, there are limited studies on the reference ranges of pregnant women for the local population. This study reports on the haematological parameters of pregnant women attending antenatal care at Nakaseke Hospital, central Uganda.

A cross sectional study involving pregnant women was conducted from the month of May to August, 2018. Ethylene di-amine tetra acetic acid (EDTA) venous blood samples were collected and a full blood count (FBC) was run. Data for the haematological parameters was presented in tabular form as mean ± SD in reference to 95% reference intervals.

This study has explored a variance in the haematological parameters. This necessitates incorporation of specific reference ranges for clinical care and management of gestational disorders.

Introduction
Pregnancy is associated with changes in red blood cells (RBCs), haemoglobin concentration (Hb), haematocrit (HCT), platelets (PLTs), and white blood cells (WBCs) [1-3]. Physiological changes alter the haematological parameters mainly as a result of plasma accumulation, hemodynamic and haematological demands [4-7]. These changes lead to a drop in haematological parameters by a specific unit, and this stabilizes in the third trimester, when maternal plasma volume reduces [6]. As pregnancy is associated with numerous obstetric emergencies, establishing haematological reference ranges is a key aspect to the interpretation of results and a guide to make informed decisions regarding their care and management [5]. Unfortunately, most laboratories do not establish reference ranges for the local populations; rather they adopt those given by equipment manufacturers or use conventional ranges of the health population [8,9]. Yet reference standards are population based and selected on the basis of as age, dietary habits, ethnicity, and the environment changes [6]. This makes apt diagnosis rather difficult, and may aggravate the complications associated with pregnancy [3,10]. This leads to mismatched clinical and therapeutic interventions [3], which aggravates severe outcomes [10]. To this, this study established the haematological parameters among pregnant women in Nakaseke Hospital, Central Uganda.

This consisted of the pregnant women attending antenatal care in Nakaseke hospital. The sample size was estimated using Slovin’s formula [11]: n= N/1+N (e)2. Given n as the sample size, N as the antenatal clinic monthly (estimated at 211); thus a total of 135 pregnant women were considered. Eligible participants were enrolled using simple random sampling technique, provided they did not present with any illness, anomalies in pregnancy and were above 18 years of age. The study excluded pregnant women who had chronic illness, infections like malaria, urinary tract infections, those mothers that were not taking folic acid, Vitamin B12, Ferrous supplements and pregnant women with obstetric emergency.

Data was entered in spread sheet (Microsoft Office Excel, version 2010). This data was then transferred for analysis to SPSS version 16.0, and presented in tabular form as mean ± SD in reference to 95% reference intervals. Three control levels were tested on the CBC machine daily to ensure accurate results.

This study obtained ethical approval from the Research and Ethics Committee of Clarke International University (Formerly, International Health Sciences University). Further permission was obtained from Nakaseke hospital and informed consent form the pregnant women who participated in the study. 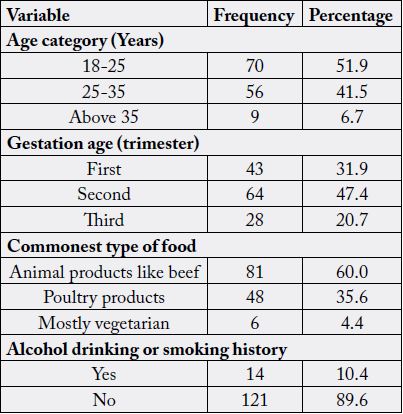 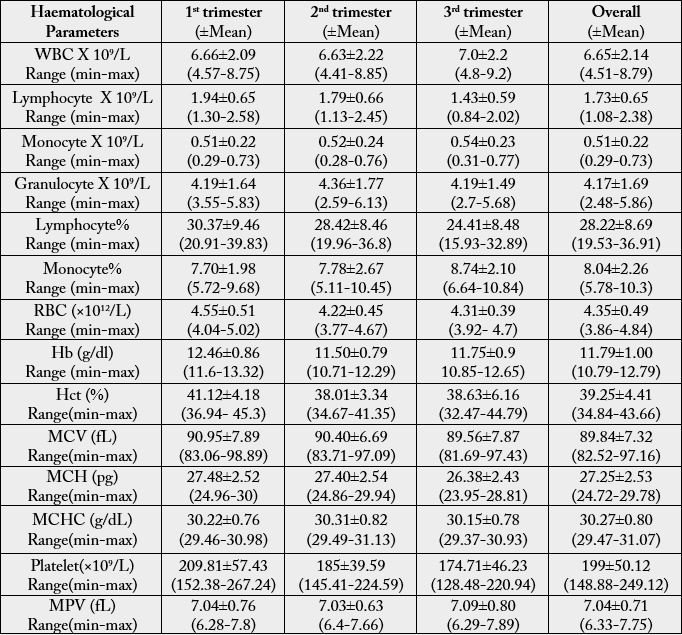 Discussion
Reference ranges are pivotal to the interpretation of laboratory diagnoses. This study found that the red blood cell parameters were affected by a gradual decrease as the gestation progressed from the first two trimesters, and slightly increased in the last trimester. This is similar to previous reports [4,5], and is attributed to physiological variances in plasma volume (50%) that exceeds the maternal erythropoiesis (18- 25%) induced due to pregnancy [13]. As there was no significant change in MCV, it is likely that the cellular changes are as a result of plasma accumulation and not due to nutrition deficiencies like insufficient iron of vitamin B12 deficiencies; similar to what was reported [3]. Contrary to the findings of Rayis et al. [13], the mean corpuscular haemoglobin and mean corpuscular haemoglobin concentration showed no significant changes in the trimesters; similar to a conclusion reached by Milman et al. [1]. The haematocrit value decreased during the first two trimesters, similar to a pattern of variation that was observed by Rayis et al. [14]. This is explained by constant HCT value in the in the third trimester as a result of the contraction in the volume of maternal plasma [7]. The heme-dilution is due to increased circulatory demand which causes vasodilatation that further stimulates the renin-angiotensin-aldosterone system [5]. It is very important to correctly interpret these results putting into consideration the fact these maternal changes in the haematological parameters during pregnancy are partly modified by nutrition as earlier reported [14].

There was no significant change in total WBC count from the 1st to the 2nd trimesters, but there was significant rise in the total WBC count in the 3rd trimester. Never the less the total WBC count during pregnancy was higher than in non-pregnant states that is, there was a general increase in WBC count during pregnancy. This is consistent with previous findings [15,16]. The leucocytosis during pregnancy is ascribed to the associated stress [6]. Among the WBCs, the granulocytes (that is, neutrophils, basophils and eosinophils) increased most. This is in line with previous research findings [16], however the lymphocytes population decreased slightly throughout pregnancy; similar to a previous report [13]. The decrease is ascribed to the body’s protective function of the foetus against B- Lymphocytes that would perceive the foetus as an alien body and produce antibodies against it [6]. Monocytosis was seen in the early 1st trimester and there was a very slight increase in the percentage of monocytes from 1st to the 3rd trimesters. This is explained by the fact that the immune system of the pregnant woman is adapting to its new state [6], and also the fact that monocytes infiltrates the decidua and prevent foetal allograft rejection [8]. Contrary to our findings, the reference values are slightly low than those in Southwest Nigeria [2]. Many of these variations in the haematological parameters among different people could be an effect of ethnicity, nutrition and genetic differences [17,18].

In the current study, total platelet count decreased from the 1st to the 2nd to the 3rd trimesters. This is supported by previous studies [13,19]. The results of this study were limited by the fact that our research design did not allow to follow up any pregnant woman through all the three-trimesters to establish the physiological changes. In addition, this study did not collect anthropometric data, which may have identified haematological indices due to chronic malnutrition, or iron and micronutrient deficiencies.

Conclusion
This study has established the local haematological among pregnant women, and this is important to the attending obstetricians to manage the pregnant women.

Conflict of Interest
The authors declare no conflict of interest.

Acknowledgement
We are grateful to the study participants, and the staff of Nakaseke Hospital antenatal clinic for the tremendous support.