Copyright © 2021 Dr. Younes, S. A., et al. This is an open access article distributed under the Creative Commons Attribution License, which permits unrestricted use, distribution, and reproduction in any medium, provided the original work is properly cited.

Chronic patellar tendon rupture is uncommon, but it is a debilitating injury. Different surgical techniques have been described in the literature including the use of ipsilateral semitendinosus with or without gracilis tendon autograft, contralateral bone-tendon-bone autograft, Achilles tendon allograft, and artificial ligament. However, there is no large case series have been published about this uncommon in injury, patellar tendon rupture becomes chronic if diagnosed which may lead to proximal migration of the patella, thigh muscle wasting, and decreased knee range of motion, the purpose of this case report is to present an easy technique to reconstruct the patellar tendon with semitendinosus and gracilis quadruple autograft and restore the position of the migrated patella by V-Y quadriceps plasty.

Introduction
Chronic patellar tendon rupture is not a common injury but it is a disabling condition that may cause deterioration of daily life activities due to loss of knee extension, there is no consensus in the literature on how to manage chronic patellar tendon rupture. There are different techniques described for the management of this uncommon debilitating injury including autograft, allograft, and synthetic material. Chronic patellar tendon reconstruction usually associated with proximal migration of the patella, quadriceps atrophy, and poor soft tissue condition all these factors have led to less favorable results of reconstruction in the chronic case than acute repair [1].

Case report 40 years old soldier presented with a history of a war injury in his right knee, on examination, there was an open fracture in the distal femur and proximal tibia with loss of the distal part of the patella and macerated remnant of the patellar tendon, initially spanning external fixator was applied and wound debridement done. The patient left the hospital and traveled seeking care at another hospital. He came to us after one and a half year after fracture union with neglected patellar tendon and high-level patella (Fig 1 A and B). He was complaining of knee instability and inability to extend his knee, by examining the patient, there was quadriceps muscle wasting, the patella was positioned high and there was a complete loss of knee extension movement. The x-ray revealed united distal femur and proximal tibia fractures and high-level hemipatella with Insall Salvati ratio of about 3.7 (Fig. 2). 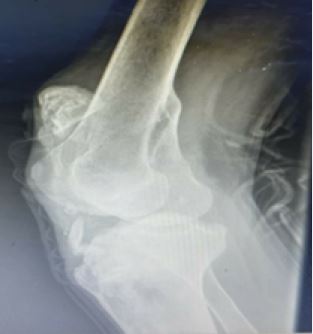 Operative Technique
Under general anesthesia, without using a tourniquet through a longitudinal midline incision the patella was exposed and it was difficult to bring it down to the normal level, so we made a V-Y lengthening of the quadriceps tendon until the patella reach the desired level (Fig 3A). Semitendinosus and gracilis tendon were harvested from the same leg and the two tendons were sewed together by using Vicryl 3/0 suture to form a double graft (Fig 3B). A transverse tunnel was made at the level of the tibial tuberosity (Fig3C) and the two bundle graft were passed through the tunnel. Both limbs of the graft were stitched together over the tunnel to form a quadruple graft (Fig3D). The graft then repaired by Bunnell technique in the patella by making two tunnels in the patella through which the sutures were passed by using suture passer and tied together over the top of the patella and the wound closed in layers (Fig 3E). 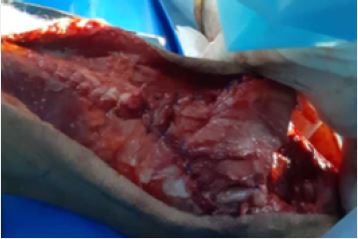 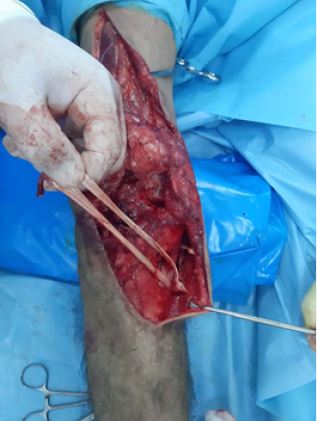 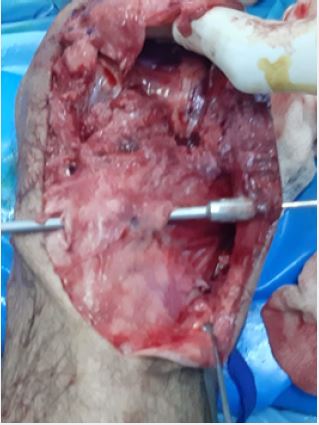 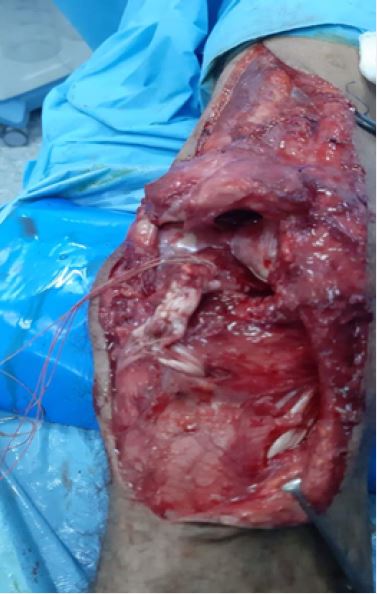 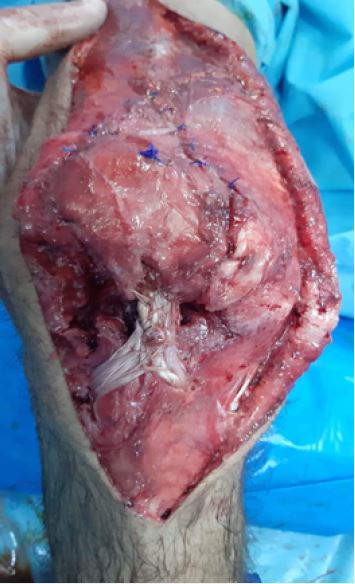 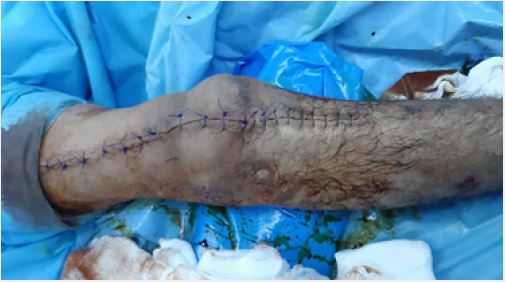 Post Operative Care
The leg was kept in a cylindrical cast for 6 weeks and weight bearing were allowed in the postoperative period immediately. After 6 weeks the patient started physical therapy with gradual knee flexion exercise and quadriceps strengthening by active assisted and then by active exercise.

Results
No intra or postoperative complications were noted. After 6 months of knee exercise and quadriceps strengthening the patient has a painless knee range of movement of 0 to 120 degrees with about 10 degrees of extension lag. The clinical results were assessed and evaluated after two years by knee function assessment scores including Tegner-Lyshlom knee score, Modified Cincinnati Rating System and IKDC score, the Tegner-Lyshlom score improved from 39 preoperatively to 85 (good), the Modified Cincinnati Rating System improved from 28 preoperatively to 73 postoperatively (good) and the IKDC score improved from 37.9 to 75.9. There was no radiological sign of patellofemoral osteoarthritis, the Insaal-Salvati ratio improved from 3.7 preoperatively to 1.8 postoperatively. Furthermore, the patella was centered in the trochlear groove. Quadriceps power was 4/5 and there was residual quadriceps wasting. The active range of motion had improved to 125 degrees and the patient resumed his preinjury occupational activity.

Discussion
Chronic patellar tendon rupture is an uncommon injury and usuallly occurs after misdiagnosis of the initial injury or with failure of the initial operation. Around 38% of knee extensor ruptures were misdiagnosed initially and 18% progressed to chronic cases after 2 weeks of the injury as stated by Siwek and Rao [2]. Our case is different in that, the cause of injury is an explossion during the war time. That resulted in open fracture of the distal femur, proximal tibia and loss of the lower third of the patella with its patellar tendon. This resulted in a complete loss of active knee extension and upward migration of the patella to the supracondylar level. It was difficult to bring the patella down to the trochlear groove without quadriceps lengthening. Unlike other injuries found in literatures which were commonly reported as a result of sporting activities [2]. There were several techniques described for repair of chronic patellar tendon injury with proximal migration of the patella including: use of ipsilateral semitendenosis alone or with gracilis tendon graft [3], artificial ligament [4], achillis tendon allograft [5]. and the use of contralateral patellar tendono bone - tendon - bone graft [6]. Although, several techniques have been reported for management of this uncommon debilitating injury, however, there is no large case series exists. This makes the management of this injury a controversial issue. For repositioning of the retracted patella Siwek and Rao used up to 2 weeks pre-operative traction [2]. Mandelbaum et al recommended Z- lengthening of the quadriceps tendon and Z- shortening of the patellar tendon [7]. Sameh A. et al described two-layer repair of the chronic patellar tendon rupture, in which they shortened and repaired the elongated patellar tendon and augmented the repair with achillis tendon-bone allograft with 0 - 130 improvement in active range of motion at 32 months of post operative follow up [8]. Nguene-Nyemb have used semitendinosis autograft to reconstruct chronic patellar tendon injury by keeping the tibial insertion of the semitendenosis non disturbed and making a horizontal tunnel in the patella to pass the tenon graft through it and repairit back to thr remaining patellar tendon and at 2 years follow-up the patient were able to achieve fullflexionand quadriceps strngth were marked as 5/5 [9]. Harto et al, have used Leeds-Keio (LK) artificial ligament with good short term results and advantage of easy preparation for the procedure, no donor site morbidity and short operative time but with unknown long term effect [10].

Conclusions
Although, chronic patellar rupture is uncommon, however, it is a disabling condition that interfers with daily activities. Surgical reconstruction is required to help patients to return to the pre-injury activity levels. Our technique of reconstruction is simple, cost effective, and gives good results that are comparable to other surgical techniques described in literature.