Copyright © 2021 Dr. Mohamed Eman, et al. This is an open access article distributed under the Creative Commons Attribution License, which permits unrestricted use, distribution, and reproduction in any medium, provided the original work is properly cited.

Introduction
Pulmonary alveolar microlithiasis (PAM) is a rare chronic disease characterized by multiple microscopic calculi within the lung alveoli and can remain asymptomatic for long time despite of the imaging findings [1,2]. Symptoms start at most cases in the third and fourth decades of life. It is mostly accepted now that the disease has an autosomal recessive inheritance [3]. Recently, a few reports have described the role of mutation in the type IIb sodium-phosphate cotransporter gene (SCL34A2 gene) in the disease pathogenesis [4]. The authors present a case of asymptomatic PAM in a 55-year-old woman, as an incidental diagnosis associated with antiphospholipid antibody syndrome.

A 55-year- old female patient, married and has 4 offsprings, the youngest one is 20 years old. The patient is known to be hypertensive for 35 years, but she is not compliant with medication. Patient presented with acute onset of left sided weakness and hypothesia, which was not preceded by fever, trauma, headache, blurring of vision or projectile vomiting.

There was symptoms suggestive facial nerves affection in the form of deviation of the mouth to the right side and accumulation of food behind cheek. There was no history suggestive of other system affection.

She has past history of repeated abortion for 8 times, in the second trimester, and two still birth. Additionally, she had one attack of CVS, 15 years ago, resulted in left sided mild weakness.

Laboratory tests including B2 glycoprotein 1, Lupus Anticoagulant, Anticardiolipin IgG and IgM all were positive. 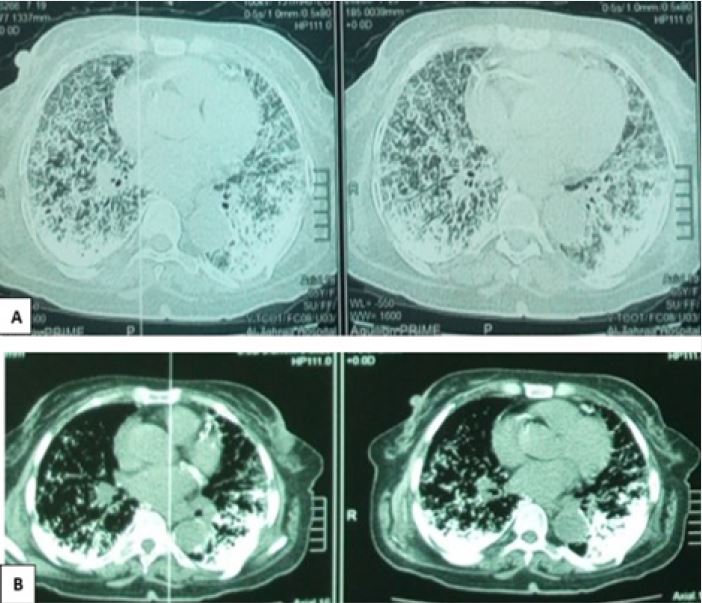 Figure 3: (A) High-resolution computed tomography (HRCT) in lung window showing thickened interlobular septal lines with fine centrilobular calcifications leading to diffuse increased density of the lung parenchyma. (B) HRCT in bone window highlighting the microlith deposition; most pronounced in the middle lobe and mediobasal segment of the right lower lobe.

Microlith analysis in sputum was positive. Consequently, the diagnosis of PAM was established.

Discussion
PAM is a rare pulmonary disorder in which numerous microliths (calcium phosphate) which is gradually accumulating in throughout the lungs alveoli [5-7]. PAM is considered an autosomal recessive genetic disorder due to loss of function mutations in the gene encoding type IIb sodium-phosphate cotransporter, SCL34A2. The SLC34A2 gene comprises 13 exons, one is noncoding and the other 12 exons encode type II sodium-dependent co-transporter called NPT2b. The protein has a major role in phosphate homeostasis [6,8]. Consequently, this type of Homozygous loss of function mutations result in decreased phosphate reuptake, in the apical membrane of type II alveolar cells, by type IIb sodium phosphate transporter, leading to chelation of calcium phosphate and microlith formation giving the typical radiological appearance. The age at clinical onset in an extensive study of 300 patients was highly variable (5-41 years) with a great discrepancy between radiological findings and clinical symptoms [7]. Most patients are diagnosed incidently which is often based on abnormal findings in a chest X- ray. They may remain asymptomatic for years or even for decades after being diagnosed. The potentially lethal disease often follows a slowly progressive course ending with deteriorating pulmonary functions. This progression may occur over a period of 10-20 years. there have been many cases (around 500 cases) reported worldwide [7]. Currently, apart from lung transplantation, no clearly defined treatment options are available in literature. However, it has been reported that not only the clinical condition but also the radiological findings have been improved in two patients treated with bisphosphonates [9]. The reported mutations in the SCL34A2- gene occur, most commonly, in one of the exons with a predicted protein truncating effect [10]. so far, only five different homozygous deletions and one deletion plus insertion mutation have been reported [8,10,11]. Hereby, we describe the first case, reported in Egypt, diagnosed with pulmonary alveolar microlithiasis associated with antiphospholipid antibody syndrome.

Conclusion
Antiphospholipid syndrome diagnosis can be challenging due to missed diagnosis The characterization of PAM remains challenging because of its rarity worldwide. Since PAM is uncommon, the radiologist needs to keep this disease in mind &should be considered in the differential diagnosis of diffuse parenchymal disease of chest. After PAM is diagnosed in a given patient, family members should be screened by chest radiography, and parents should be counseled that future children are also at risk of developing the disease. Our patient and her family members were advised to undergo regular medical follow up of their disease. However, they all lost to follow up to our clinic. The best diagnostic work-up consists of chest radiography followed by chest HRCT, Chest radiography may sufficient in family members of a patient already diagnosed with PAM. Genetic testing may help to identify other latent patients in the family of the patient with PAM.