Conflict of Interest and
Financial Disclosure


Foreign Body Granuloma Presenting as a Lytic Lesion of the Ilium: A Case Report

Copyright © 2021 Dr. Kyriakos Papavasiliou, et al. This is an open access article distributed under the Creative Commons Attribution License, which permits unrestricted use, distribution, and reproduction in any medium, provided the original work is properly cited.

Foreign body granulomas, alternatively known as gossypibomas, may rarely mimic aggressive musculoskeletal tumors, both clinically and through imaging studies, potentially leading to unnecessary diagnostic and/or surgical interventions. A gossypiboma is a totally preventable, rather infrequent and under-reported complication, which may have serious medico-legal implications. It occurs due to an artificial material which was accidentally or intentionally retained in the surgical area. We report the case of 65-year-old patient, reporting constant pain for 3 years and imaging studies depicting a non-contained lytic lesion at her left ilium. A CT-guided biopsy was nondiagnostic. The patient had sustained a tibia fracture, operatively treated with internal fixation and instillation of autologous graft harvested from her left ilium. Based on history, physical examination and available imaging (revealing a radiopaque structure), the patient was diagnosed with a gossypiboma. She was operated on, leading to full recovery.

Introduction
Foreign body granulomas, or gossypibomas, are inflammatory foreign body reactions occurring due to artificial materials which were accidentally or intentionally retained in the surgical area [1]. A gossypiboma (alternatively known as textiloma, cottonballoma, gauzeauma or muslinoma) [1,2], is a rather infrequent complication.

The patient was informed that data concerning the case would be submitted for publication and she agreed.

Case Report
An otherwise fit and well 65-year-old female patient was referred to our department (a national-level reference center for the treatment of bone and soft-tissue tumors) for evaluation and treatment. She reported dull pain at her left ilium, with an onset of approximately 36 months before her initial evaluation at our outpatient clinic. She had undergone an antero-posterior radiograph of the pelvis (Figure 1) and a Computed Tomography-scan (Figure 2). The latter was depicting a non-contained lytic lesion at her left ilium, with destruction of part of the medial iliac cortex and extension of a reactive mass to the adjacent intra-pelvic soft-tissues. She had already undergone a CT-guided core needle biopsy in another institution 6 months before (Figure 3), which was non-diagnostic, reporting only a foreign body type reaction. After that, she had also undergone full staging, which also came back negative for any malignancy. 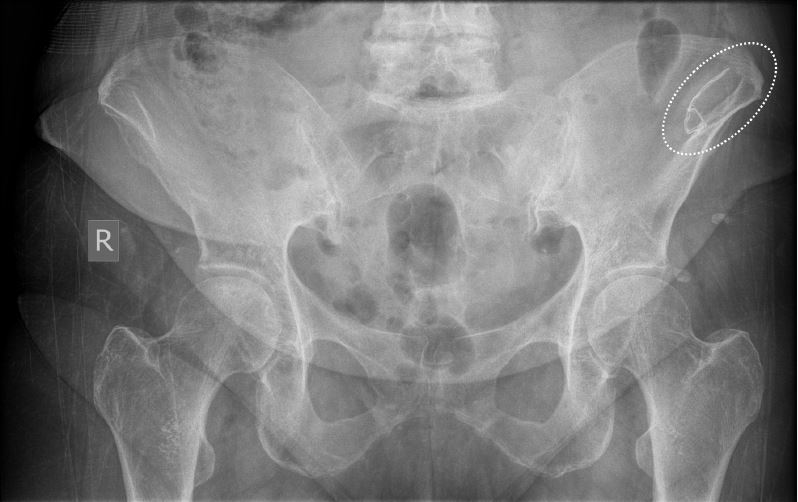 Figure 1: Pre-operative antero-posterior radiograph of the patient’s pelvis. Notice the radiopaque interwoven marker (dotted white line) of the small surgical swab that was left at the left iliac crest following the harvest of autologous bone graft

Figure 2: Pre-operative axial CT-scans (a-d) depicting the “lytic lesion” at the left iliac crest with the reactive mass extending along the medial plane of the ilium (white arrows) to the adjacent soft-tissues. Notice the radiopaque interwoven marker of the surgical swab that was left inside the patient, at the site of interest. 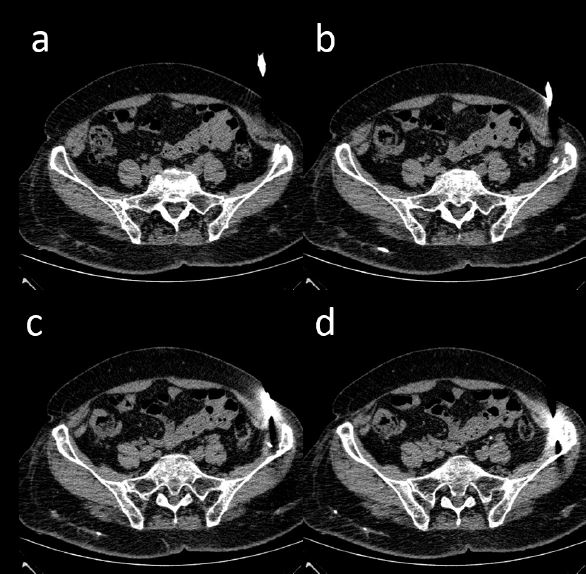 Figure 3: Consecutive axial CT-scans (a-d) of the CT-guided core needle biopsy of the “lytic lesion” at the left iliac crest, performed at another institution, six months before the patient was referred to our department

From her history, the patient reported a left proximal tibia Schatzker et al. type III fracture [3], 40 months before her initial visit to our department. The fracture had been treated in another institution operatively, with open reduction and internal fixation with the use of a buttress plate and the instillation of autologous cancellous bone graft, harvested from the left ilium of the patient. Her pain was initiated 6 months following her tibia and iliac crest operations.

Meticulous studying of the patient’s imaging, revealed the existence of a radiopaque structure, with consistent appearance at all available studies, located exactly at the point of interest. The operative report of her tibia fracture operation did not reveal anything suspicious. The patient had not undergone a radiograph of her pelvis, following the operation at the iliac crest. Physical examination revealed extreme tenderness upon palpation at the site of the surgical wound above the iliac crest. It is of interest to mention, that the patient reported that this was the first time a physician performed a physical examination on her, regarding this specific medical issue.

Based on her history, the physical examination, the available imaging studies, and the pathology report of the CT-guided biopsy, we concluded that the patient was probably suffering from a gossypiboma, hence there was no need for any additional imaging and especially for a Magnetic Resonance Imaging-scan. The patient was operated on a few days later. Under general anesthesia and following a typical incision along the iliac crest, just underneath the fascia and along the medial plane of the ilium, a small surgical swab was retrieved from the surgical field (Figure 4). The pathology report of the excised surrounding reactive mass, together with the identification of the surgical swab, confirmed our diagnosis of a foreign body type granuloma. The pain subsided immediately postoperatively (Figure 5). The patient was discharged uneventfully two days postoperatively and remains symptoms free at her latest follow-up visit two years following the removal of the surgical swab (Figure 6). 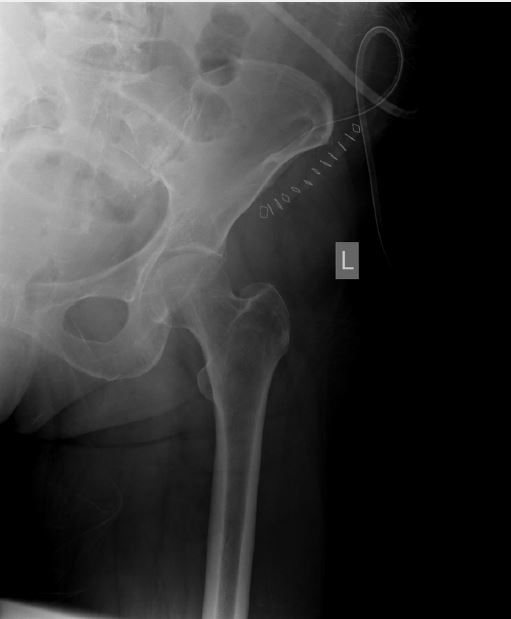 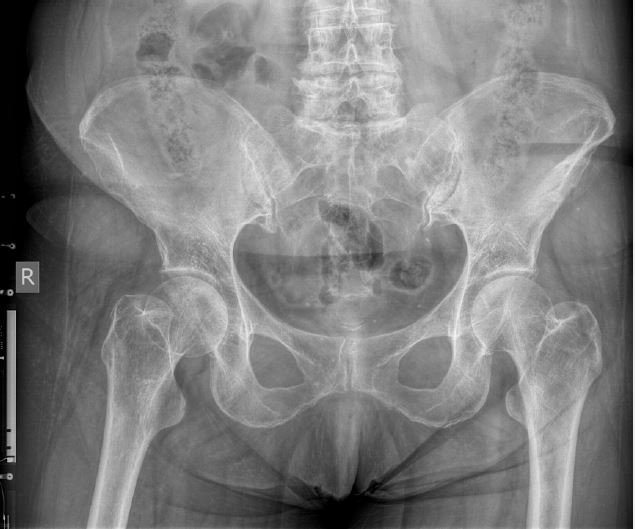 Figure 6: Antero-posterior radiograph of the patient’s pelvis at the latest follow-up visit at 24 months following the removal of the gossypiboma.

Discussion
A gossypiboma is an iatrogenic lesion, developing following an operation, when a compress, a woven drape or a small surgical swab is left inside a patient’s body. It was firstly described by Wilson in 1884 [4]. Gossypibomas are rather uncommon complications, which moreover are probably underreported due to medico-legal implications and consequences. Their incident is estimated to range from 1/300 to 1/3000 operations and they are more frequently encountered following a gastrointestinal surgery [1,5]. The risk of a postoperatively retained foreign body, significantly increases in emergencies, when unplanned changes in the operative procedure occur, and in obese patients [6].

The imaging work-up in cases of a suspected gossypiboma of the musculoskeletal system necessarily includes radiographs, a contrast enhanced MRI-scan and ultrasonography (usually not performed in gossypibomas of the limbs). A contrast enhanced CT-scan is usually not more helpful than an MRI. Positron Emission Tomography-scans and Bone-scans are not sensitive or specific enough in this context [5]. We did not perform an MRI-scan to our patient, because she had already undergone imaging studies and a biopsy, rendering its use redundant. However, it would probably be safer to perform a contrast-enhanced MRI-scan to outline the lesion (and define the bony and soft tissue boundaries) and a new careful biopsy along the foreign body’s margins (frozen section) to rule out a secondary oncological process after the previous coreneedle biopsy.

There are only a few reported cases of gossypibomas following orthopaedic operations in the pelvis and the extremities (mostly in the lower limbs) [1,5]. In most of these cases, the symptoms begun many years, or even decades following the initial operation and the lesions’ appearance mimicked that of a soft-tissue mass or a sarcoma [1]. Even though none of these lesions, which occured following an orthopaedic operation, was ever proven to develop a sarcomatous transformation, Ben-Izhak et al. [7] did report a sarcomatous change in a pelvic retained foreign body following a gynaecological operation, and one must keep in mind that the inflammatory reaction caused by the retained foreign body does have the potential to cause osteolysis [1].

The hereby reported case is -to the best of our knowledge- the first in the English literature, describing a case of a gossypiboma mimicking a lytic non-contained bony lesion of the ilium, with imaging and clinical characteristics similar to those usually found in metastatic lytic bony lesions. Following a thorough literature research, we were able to identify another 3 cases of gossypibomas of the ilium. In all cases there had also been an iliac crest bone graft harvesting operation. In two of them, the gossypiboma was discovered within the first postoperative month, following the development of acute infection symptoms and signs (fistulas at the operative scar) [8]. In the third case, the gossypiboma was discovered 34 years following the initial operation, and it was presented as a large soft-tissue mass between the gluteus medius and maximus [2]. In none of these three cases, the imaging characteristics were consistent with a lytic (potentially metastatic) bony lesion. The lytic appearance of the hereby described lesion may well be attributed to the bone graft harvesting procedure, since the initial graft harvesting procedure had taken place relatively recently. However, the possibility that (at least to some extent) it was developed, and/or enhanced by the inflammatory reaction, cannot be entirely excluded.

The age of the patient, her symptoms, the imaging characteristics of the lesion, the inadequately obtained history and the inefficient original physical examination, rendered highly plausible the initial diagnosis of a metastatic lesion to the ilium, with which the patient was referred to our department. As a result, and due to several mistakes, made by different people, at different settings and time-frames, the patient had undergone several unnecessary imaging procedures and a CT-guided biopsy.

Gossypibomas are totally preventable lesions. Surgical instrument counts should always be performed, even in the smallest operations, since this is the only adequately efficient way to prevent this surgical complication. However, even counts, are clearly not always sufficient, since in many cases, a final count was erroneously thought to be correct. Radiographic screening of high-risk patients at the end of operations in order to identify radiopaque interwoven markers, should also be considered, even when counts are documented as correct [6]. Unfortunately, even this measure may be proven unsuccessful, if the obtained radiograph is not meticulously studied, as it was in our case.

Conclusion
Gossypibomas are rare -yet existing- postoperative complications that may lead to increased morbidity, and/ or mortality. Last but not least, they may certainly have serious medico-legal implications. Standardized operative procedures are bound to prevent their development. However, when a gossypiboma is suspected, appropriate imaging work-up must always be performed before the initiation of treatment. Imaging findings combined with history of an operation, are potential indications of the existence of a gossypiboma, and may protect the patient from undergoing unnecessary medical procedures.

Conflict of Interest and Financial Disclosure
The authors declare no conflict of interest and no financial support regarding the preparation and submission of this manuscript.