Copyright © 2022 Dr. Kenneth Blum, et al. This is an open access article distributed under the Creative Commons Attribution License, which permits unrestricted use, distribution, and reproduction in any medium, provided the original work is properly cited.

Reward Deficiency Syndrome (RDS) characterization is based on the biological processes of reward that underpin substance addiction and all addictive, compulsive, and impulsive behaviors. RDS disrupts/prevents normal feelings of satisfaction and represents a failure of the reward cascade system that normally confers satisfaction. The fundamental cause of RDS is dopamine dysregulation in the brain’s reward center (the mesolimbic system), which results in hypodopaminergia. Therefore, RDS is a deficiency, a hypodopaminergic trait/state that is caused by a combination of genetic variations, environmental stressors, and adverse molecular effects or blunting due to prolonged substance use, behavioral habituation (epigenetics), or DNA polymorphic antecedents (neurogenetics). RDS can be assessed and diagnosed with the Genetic Addiction Risk Severity (GARS) test, which has also been used in clinical studies to measure predisposition to RDS sequelae (i.e., addictions) and their severity, thus having clinical utility and benefit. Additionally, research demonstrates that over half of all suicides are related to substance use. In addition to effective fellowship programs and spiritual acceptance, nutrigenomic therapies (e.g., KB220Z) optimize gene expression, rebalance neurotransmitters, and restore neurotransmitter functional connectivity. KB220Z, a semi-customized nutrigenomic supplement, has been shown to increase functional connectivity across specific brain regions involved in dopaminergic function and significantly reduce RDS behavioral disorders. The Genetic Addiction Risk Severity (GARS) test, used in conjunction with KB220Z, can be used to effectively treat RDS and restore dopamine homeostasis. Finally, we believe that RDS should be included in future versions of the Diagnostic and Statistical Manual of Mental Disorders (DSM) because, while the DSM features symptomology, it is equally important to feature etiological roots as portrayed in the RDS model.

Reward Deficiency Syndrome (RDS) is universally defined in The SAGE Encyclopedia of Abnormal and Clinical Psychology [1], in hundreds of peer-reviewed clinical studies and publications on RDS, as well as in other medical dictionaries, including emcyclopedia.com [1]. Specifically, there are 1432 articles on “Reward Deficiency” and 219 on “RDS” (whereby 47% are independent of Blum’s lab) as of 4-29- 22. RDS is characterized as the clinical manifestation of a group of addictive, compulsive, and impulsive behavioral disorders. These disorders are associated with specific genetic variants that result in an inadequacy in the neurotransmission of reward or pleasure - especially the action of dopamine. RDS is a chronic hypodopaminergic state [2,3].

Table 1: Odds ratios of polymorphisms under consideration based on 74,566 case-control subjects 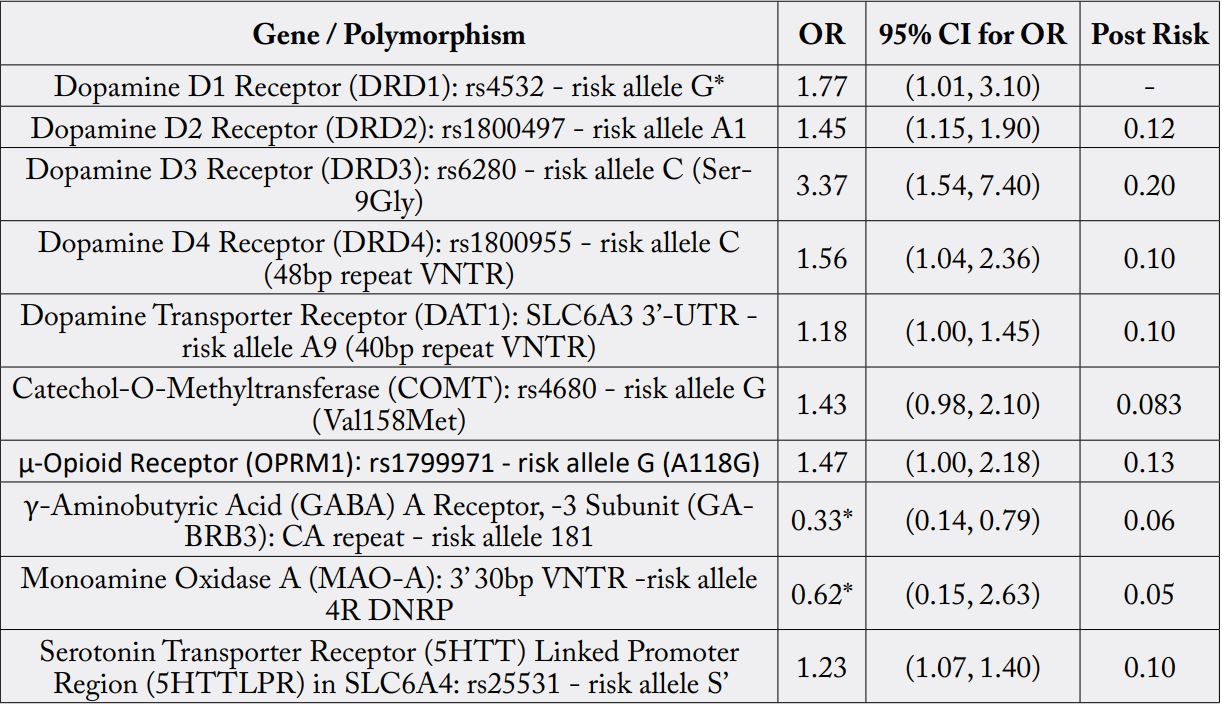 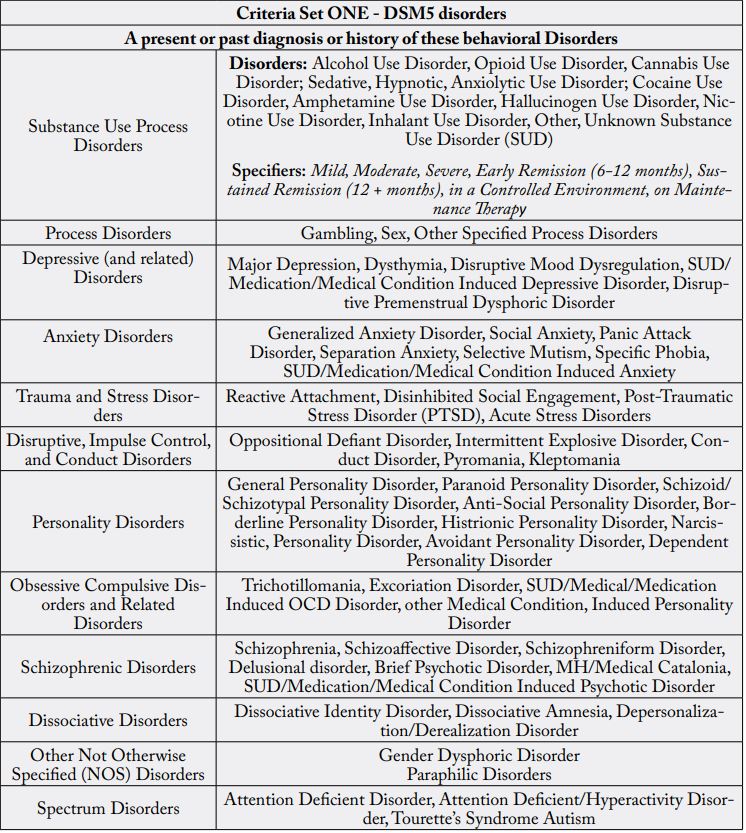 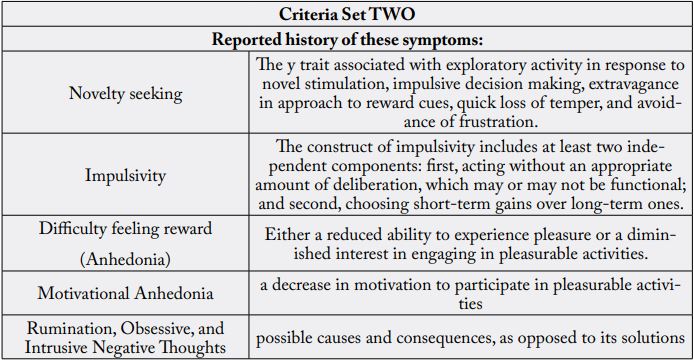 The RDS was developed through animal and human research that explored behavioral genetics and the molecular biology of neurotransmission [14-18]. The basic cause of RDS is issues with neurotransmitter receptors, which ultimately are involved with the regulation of dopaminergic activity in the brain’s reward center - the mesolimbic system, including the nucleus accumbens [19-26]. Individual neurons in the reward cascade are catalyzed by several specific neurotransmitters, which bind to certain receptor types that serve a particular function. RDS results in a disruption in normal cascade function [27]. Epigenetics (such as over exposure to substances) and inherited genetic variants may result in the downregulation or dysfunction of reward-related neuro receptors [28]. Persons who do not experience ordinary pleasure in their lives are predisposed to utilize substances or engage in behaviors to activate dopamine release [29,30]. This increase in dopamine release and utilization reduces stress and increases feelings of reward in people with RDS. Such utilization is more highly reinforcing in such RDS-afflicted persons versus healthy normal persons [31].

The biological processes of reward that underlie addiction to substances and all addictive, compulsive, and impulsive behaviors are the basis of the RDS conceptualization. RDS then is a deficiency, a hypodopaminergic trait/state caused by a combination of genetic variations, environmental stressors, and adverse molecular effects or blunting due to prolonged substance use, behavioral habituation (epigenetic), or DNA polymorphic antecedents (neurogenetic) that could be measured via Genetic Addiction Risk Severity (GARS) and have clinical utility and benefit [3,32]. In terms of RDS criteria, currently there are a number of articles that feature known clinical sequelae [20,21,33].

RDS disrupts or prevents normal feelings of satisfaction and represents a failure of the reward cascade system that normally confers satisfaction [34]. Intercellular disruption of the reward cascade results in problematic behaviors, characteristics, and pathology [35]. Numerous disorders share the genetic hypodopaminergic trait and are sequelae of RDS [36]. Addictive, compulsive, and impulsive behaviors such as overeating, drug and alcohol abuse, pathological gambling, hyperactivity, autism spectrum disorders, risk-taking, and personality disorders all come under the RDS rubric (see Table 3).

Currently, the Diagnostic and Statistical Manual of Mental Disorders (DSM) is the definitive resource for all mental disorders. The DSM-5 includes diagnostic criteria for SUD that distinguish between SUD and substance-induced disorders. SUD criteria are based on the harmful consequences of repeated use, but substance-induced disorders include intoxication, tolerance, compulsive use, and/or withdrawal. Concurrently, genetic covariance between substance- and non-substance-disordered individuals can be the result of individuals carrying reward gene allele variations (polymorphisms). Thousands of studies, cases, reviews, and meta-analyses show significant dopaminergic gene polymorphism overlaps between RDS and many psychiatric illnesses, although additional research is merited (Figure 2). This genetic covariance amongst individuals, due to genetic polymorphisms, can be utilized to predict phenotypic responses to environmental circumstances.

While we believe that in the future, RDS deserves to be included in the DSM-VI and should be given an ICD code, we are also cognizant that the brain is not carved out according to the DSM. In this regard, Hyman’s group discussed this issue [37]. Specifically, neuroscience research into psychiatric disorders typically relies on disease classifications that are established by the influential DSM. The DSM was designed solely as a diagnostic tool, and it treats different disorders as distinct entities. However, the boundaries between disorders are not always as clear as the DSM claims. To provide an alternative framework for research into psychiatric disorders, the US National Institute of Mental Health (NIMH) created the Research Domain Criteria (RDoC) project. There are five “domains” in the RDoC, and each reflects a brain system in which functioning is impaired, to varying degrees, in various psychiatric conditions. In agreement with these concepts, it is our opinion that while the DSM features symptomology, it would be equally important to feature etiological roots as portrayed in the RDS model [38].

In summary, alcohol and SUD share comorbidity with other RDS disorders, i.e., a reduction in dopamine signaling within the reward pathway. RDS is a term that connects addictive, obsessive, compulsive, and impulsive behavioral disorders. We are concerned that standard treatment, at least for Opioid Use Disorder (OUD), one subset of RDS, is to provide powerful opioids for not only OUD but Alcohol Use Disorder (AUD) as well. An estimated 2 million individuals in the United States have OUD related to prescription opioids. It is estimated that the overall cost of the illegal and legally prescribed opioid crisis exceeds one trillion dollars. Opioid Replacement Therapy is the most common treatment for addictions and other RDS disorders. Even after repeated relapses, patients are repeatedly prescribed the same opioid replacement treatments. A recent JAMA report indicates that non-opioid treatments fare better than chronic opioid treatments [39].

Acknowledgements
The authors appreciate the staff of iVitalize Inc.

Author Contribution
KB and RG wrote the initial draft, review/editing was done by CD, and all co-authors approved the final manuscript.

Conflict of Interest
K.B. is the recipient of commissions derived from the Genetic Addiction Risk Severity (GARS) test and Restoregen, per license agreements. R.G. is a paid consultant of Ivitalize Inc. There are no more conflicts to declare. The funders had no role in the design of the study; in the collection, analyses, or interpretation of data; in the writing of the manuscript, or in the decision to publish the results.