Copyright © 2021 Dr. Antonio Júnior, G. L., et al. This is an open access article distributed under the Creative Commons Attribution License, which permits unrestricted use, distribution, and reproduction in any medium, provided the original work is properly cited.

Posterior Reversible Encephalopathy Syndrome (PRES) is a clinical-radiological entity associated with several image presentations and a series of clinical conditions.

We report two cases of a 60-years-old man and a 25-years-old woman, both with COVID-19 infection, who developed PRES, with neurologic damage by SARS-Cov-2.

The immediate diagnosis and the initiation of treatment of the underlying disease in an appropriate way allow a better prognosis. Sectional imaging methods allow the evaluation of PRES, specially MRI.

Background
The reversible posterior encephalopathy syndrome, known as PRES, is characterized by the subacute onset of a set of clinical and radiological signs, which, if detected early, can become reversible. The syndrome has neurological symptoms, such as headache, seizures and cognitive disorders. In some patients, there may be a clinical presentation of high blood pressure and hypertensive emergency. Magnetic resonance imaging (MRI) is the main diagnostic test [1].

COVID-19 is an enveloped RNA virus that causes respiratory disease of varying severity. Such a virus is transmitted by contact with contaminated secretions or contaminated surfaces. In addition, the diagnosis is made by PCR-TR [2].

We will report two cases showing the entire evolution, clinical and neurological findings of two patients who were admitted to the hospital with COVID-19 and developed PRES.

A 60-years-old man was admitted to our hospital with a 1-day history of headache, associated with myalgia, dry cough, odynophagia, anosmia and mild dyspnoea. No treatment was started before at home. His medical history included just hypertension.

A continuous positive airway pressure had to be started. After 48 hours, he presented worsening dyspnea even in a nasal catheter with oxygen at 5 liters/minute, sweating and hemodynamic instability, progressing with hypoxemic respiratory failure. Sedation and orotracheal intubation were necessary, with transfer to care in the Intensive Care Unit.

A nasopharyngeal swab resulted positive for SARS-CoV-2. Antiviral plus antibiotic therapies were continued, in addition to vasopressor and anticoagulant drugs. The patient presented leukocytosis (17420/microL) and progressive worsening of renal function (creatinine 3,5mg/dL), keeping the other parameters stable.

On day 25, an investigation was started to persist the lowering of the level of consciousness despite the reduction in sedation.

On day 26, he underwent a computed tomography (CT) scan of the brain (Fig. 1). Hypertensive parietal areas were identified on the right, which may represent hematic foci. Although not specific to the tomographic study, this finding can be seen in cases of Posterior Reversible Encephalopathy Syndrome (PRES). In addition, hypoattenuating areas were identified in a cortic / subcortical situation involving the parieto-occipital regions, associated with mass effect, with erasure of the grooves between the cortical gyri at these locations; hypoattenuating area in the right cerebellar hemisphere, with slightly hypertening periphery; widening of the extra-axial retrocerebellar cerebrospinal fluid (CSF) space, which may represent a large magna cistern or arachnoid cyst; and hypoattenuating foci in the supratentorial white matter, which may represent gliosis / microangiopathy. 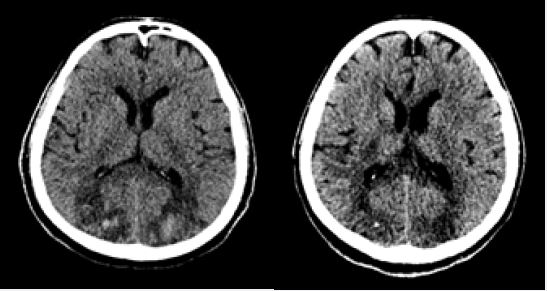 Figure 1: A-B. Brain axial CT images on day 26 (A) and day 40 (B) on a 60-years-old man show hypertensive parietal areas on the right (black arrow), which may represent hematic foci, reduced in the control exam (B).

On day 40, a new CT scan was performed, with a reduction in the parenchymal findings previously described (Fig. 1). The investigation was not continued with an MRI scan.

Subsequently, the patient persisted with an altered state of consciousness, responsiveness and lack of cognition, characterizing a persistent neurovegetative state. Care was continued at home.

A 25-years-old woman was admitted to our hospital with a 3-day history of dry cough, fever, rhinorrhea and moderate dyspnea, associated with decreased smell and taste. No treatment was started before at home.

Her medical history included current gestation at 37 weeks 4 days of gestational age. She had no history of bleeding, fluid loss or other symptoms related to pregnancy. No previous illnesses or surgeries.

She was tachycardic (101 beats per minute) and tachypneic (45 breaths per minute), but with normal oxygen saturation (97% in air room), with imminent risk of acute respiratory failure. Neurological examination was unremarkable. Laboratory tests were significant for altered C-reactive protein (87mg/L).

On day 2, full term pregnancy was surgically terminated with general anesthesia for maternal clinical support. She was maintained with invasive ventilatory support and sedation. A nasopharyngeal swab resulted positive for SARS-CoV-2. Antiviral and antibiotic therapies were maintained and care in the Intensive Care Unit was started.

On day 4, the patient remained hemodynamically stable, with extubation and control of the other clinical and laboratory signs. However, on the following day, she progressed with cardiorespiratory arrest, with reestablishment of invasive ventilatory support and infusion of vasoactive drugs.

On day 8, due to the difficulty in recovering the level of consciousness despite the reduction in sedation, a brain computed tomography scan was requested, which showed no changes.

After a week, she was tracheostomized and without sedation, but maintaining intermittent mild agitation with spasticity of the upper limbs, without recovering the level of consciousness. On day 16, she was evaluation with brain Magnetic Resonance Imaging (MRI) (Fig. 2). The images showed extensive areas of hypersignal in T2 / FLAIR with a slight swelling effect on the cortical / subcortical transition of bilateral frontal convexity, on the posterior aspect of the parieto-occipital transition, on the upper aspect of the cerebellar hemispheres and on the bilateral striatum. This finding may be related to PRES.

Figure 2: C-H. Brain axial MRI images on day 16 on a 25-years-old woman. C-F: Axial T2/FLAIR-weighted images show extensive areas of hypersignal in T2 / FLAIR with a slight swelling effect on the cortical / subcortical transition of bilateral frontal convexity, on the posterior aspect of the parieto-occipital transition, on the upper aspect of the cerebellar hemispheres and on the bilateral striatum

The patient remained with neurological sequelae, being transferred to the infirmary in order to prepare the family for home care.

Discussion and Conclusions
PRES usually presents with headache, altered mental function, seizure and loss of vision [1,3,4]. It can affect both adults and children, with the majority being 20 to 65 years old [5].

The clinical-radiological entity is associated with several image presentations and a series of clinical conditions, among which are hypertensive encephalopathy, eclampsia and use of immunosuppressive drugs [1-7].

The immediate diagnosis and the initiation of treatment of the underlying disease in an appropriate way allow a better prognosis, with possibility of total reversal. However, once the syndrome is not recognized, the patient’s condition can lead to ischemia, massive infarction and even death [1,6,7].

The pathogenesis of PRES is not precise, with two main hypotheses. One hypothesis is that severe hypertension leads to cerebral self-regulation, causing cerebral vasoconstriction, ischemia and cytotoxic edema. It is known that very high levels of hypertension are required to trigger endothelial dysfunction and cerebral self-regulation, which does not occur in most patients with PRES, with some being normotensive or even hypotensive. A second hypothesis suggests that severe hypertension leads to failure in cerebral selfregulation, with vasodilation, interstitial fluid leakage, vasogenic cerebral edema and petechial hemorrhage, resolved after blood pressure control. Some severe hypertensive patients have a smaller area of vasogenic edema than other normotensive patients with clinical-radiological suspicion of PRES [1,3].

Acute respiratory syndrome was the most common manifestation associated with the new coronavirus disease pandemic 2019, and other organs may also be affected, including the central nervous system, with different neurological manifestations [8,9]. Due to the direct toxic effect of SARS-CoV-2 on vascular endothelial cells, it is possible that endothelin, prostacyclin and thromboxane A2 are released [1]. In addition to the pathological mechanisms by direct invasion by the virus, its inflammatory action must also be considered [2]. SARS-CoV-2 can cause edema in brain tissue and partial neuronal degeneration and result from a systemic inflammatory state that causes endothelial dysfunction due to a systemic inflammatory process, such as sepsis, eclampsia, transplantation and autoimmune diseases [2].

Sectional imaging methods allow the evaluation of PRES. In CT, it is possible to detect lesions in most cases, and may be normal in the others [1]. However, when comparing with MRI, many changes are not evidenced by the tomographic method, being important the joint evaluation of the two methods or even just by the second, being the first used as a screening method. There are many sequences on MRI that can guide the radiologist in diagnosis [5,7,10-13].

The datasets used and/or analysed during the current study are available from the corresponding author on reasonable request.

The patient was consented for participation in the study.

The patient is aware of this case report submission and has provided written consent for this publication.

The authors report no competing interests.