Limitations of the Study

Copyright © 2020 Dr. Shrenik Ostwal, et al. This is an open access article distributed under the Creative Commons Attribution License, which permits unrestricted use, distribution, and reproduction in any medium, provided the original work is properly cited.

To identify the association between nutrition and cognitive functions in breast cancer who are undergoing chemotherapy.

Mean age of women in all study groups ranged from 45-65 years. At baseline, all three study groups showed significant impairment in cognitive performance when compared to healthy controls (Mean±SD =43.49±2.2 vs 34.9±4.32 vs 26.1±2.55 vs 56.1±0.02). We observed significant association between nutrition and nutrient and cognitive functions among all cancer patients: nutritional deficiency which represents that the sensitivity of cognitive dysfunction is 98% and specificity is 100%, respectively. The Area under the curve of the ROC is 0.916 (CI: 95%; LB-UB 0.826-1.006). The nutrition value of 12.1 was considered the best value to discriminate positive and negative outcome scores for cognitive dysfunction for the nutrition deficiency.

Women with breast cancer were found to have more impairment in cognitive function when compared with their healthy counterparts. The level of cognitive impairment was directly associated with nutritional level. We recommended early introduction of nutritional intervention is a crucial for preventing and minimizing the development of malnutrition at all stages of cancer treatment.

Introduction
The journey of cancer includes diagnosis, treatment, recovery, and survivorship. In each stage patients face lots of challenges including nutritional status. Both cancer and its treatment can have profound greatest risk factors for low quality of life and half of the cancer patients who die due of malnourishment [1]. This can toll up to 20% of patients die due to the effects of malnutrition rather than cancer itself. Malnutrition can result due to disease itself or as complication of treatment or both [2]. Side effects related to cancer treatment including chemotherapy, radiation, immunotherapy, and surgery can be contributing factors in deteriorations of nutritional status [3]. Changes in nutritional status may begin from the journey of the diagnosis process, when physical, as well as psychosocial issues commonly, have a negative impact on food intake. Previous researchers had documented that up to 50% of patients reported nutritional deficit in different form at the time of diagnosis. Moreover, deterioration of nutritional status has been found to predict outcome prior to the initiation of primary treatment. DeWys and his research groups found that as little as 5% weight loss predicted decreased after taking treatment. Along with, they found that overall survival rates, performance status, productivity, and quality of life declined simultaneously with weight loss. In their study, 80% patients presented with weight loss before being diagnosed with cancer [4]. Subsequently, malnutrition often noticed among patients during the period of progression of disease and its treatment [5].

In 2010, a study constructed in Australia among 191 various types of cancer patients and concluded half of the patients were malnourished assessed by the Patient-Generated Subjective Global Assessment [PG-SGA]. Additionally, the dtudy also showed that half of the patients (46%) reported improvement in nutritionrelated symptoms after attaining nutrition intervention comparing controls individuals [6].

Following previous research, incidence of cognitive deficits, the neurological pattern and brain changes associated with chemotherapy and that because of developing neurotoxicity and underlying mechanisms as well as current treatment plan [7]. Cancer patients who are undergoing chemotherapy for non-central nervous system tumors often present considerable cognitive function that adversely affect quality of life, during and after treatment [7].

Hence, we conducted a study to examine the association between cognitive function and nutritional level among breast cancer women who are currently undergoing chemotherapy.

It was a cross-sectional comparative study using validated tools and structured face to face interview.

This study was conducted at a tertiary cancer hospital in Eastern India, between April 2019 to December 2019. Early non metastatic breast cancer female participants between age group of 45-65 years, who was undergoing standard care were included, after applying specific inclusion and exclusion criteria. Nutritional status was assessed by a validated tool: PG-SGA, which was based on history and physical examination. Scoring was classified as follows PG-SGA A: normal or mild malnutrition, PG-SGA B: moderate malnutrition and PG-SGA C: severe malnutrition.

The researchers had approached 436 non metastatic breast cancer patients undergoing chemotherapy out of which 289 (65.56%) agreed to participate in the study. Among them, 178 patients were excluded [recurrence of cancer (N=113)]; or who were unable to give information and/or could not understand/read Bengali, the language spoken by the majority in this part of India (N=65) were excluded from the study, resulting in a total of 111 study breast cancer participants.

• History of past mental illness
• Inability to understand/read Bengali language

Healthy age and education matched women were chosen from the local community. 68 women were approached, of whom 50 agreed to participate in the study. Four were excluded on account of their inability to understand Bengali language. Presence of psychiatric morbidity was ruled out using the General Health Questionnaire (GHQ 12) Reading mind in the eyes test was also applied to them.

• Unwilling to participate
• Unable to read or understand Bengali language

Written informed consent was obtained from all participants. Study protocol was approved by Ethical Committee of the institute. Demographic data were collected via interview using the semi-structured proforma and biomarkers levels were noted from clinical record. After assessing nutional state using PGSGA by nutritionist, they were given the Kolkata Cognitive Battery. Presence of any physical illness in the control group was ruled out using the GHQ 12 (Figure 1). 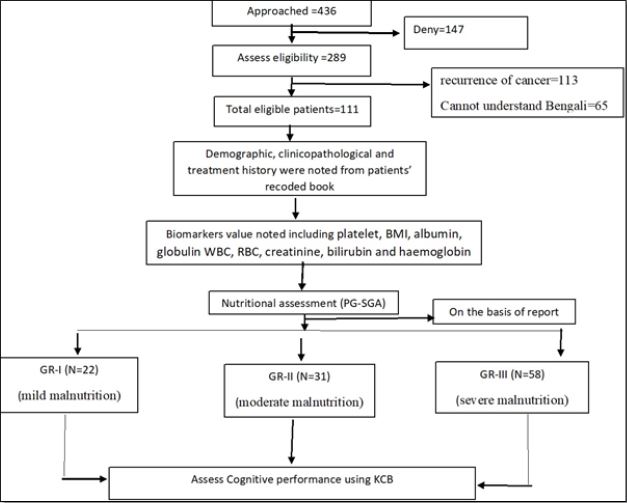 SPSS program version 24 was used for compilation and analysis of data. Descriptive statistics were calculated as the mean ± standard deviation of age and frequency of demographic factors was tabulated according to family structure, residence, education and per capita family income to determine comparability according to four groups. Along with, clinicopathological factor: - Histology (Duct carcinoma and lobular Carcinoma), ER, PR, HER2 status, Treatment history (number of chemotherapy: ≥6 and <6th cycle), Medical history: - (sleeping problem, appetite problem, other medical history) to observe comparability according to three cancer groups. Categorical variables from diet survey data were analyzed using Pearson’s Chi-Squared test for association. Prevalence of biological markers including platelet (g/L), BMI, albumin (mg/dL), globulin (mg/dL), WBC, RBC, creatinin and haemoglobin (g/dL) were calculated as the percentage and Pearson’s Chi-Squared is used to present ssociation. Functional decline was defined as any decrease in KCB mean score of three groups. Also, we calculated Pearson’s correlation coefficient cognitive impairment and nutritional level’s scores were initially investigated using Univariate analysis. Roc curve was used to show in a graphical way the connection between the sensitivity of cognitive dysfunction and specificity of nutrients status for every possible cut-off for a test or a combination of tests.

In Group-I (Low level of malnutrition), 48.9% received less than 10 years of formal education and 50% were coming from rural areas. 77% were diagnosed ductal carcinoma and 71% women faced appetite problem. Majority belonged to low socioeconomic status (500 to 1000 Indian rupees per capita per month).

In case of Group -II (Moderate level of malnutrition) majority were living in joint family (94.3%) and most of them hailed from rural areas (60.4%). 49.5% received less than 10 years of formal education and most of them were diagnosed with duct carcinoma (82%). Here also a large majority of women belonged to a low socioeconomic status.

In Group-III (Sever level of malnutrition), 79.5% were living with their family members and most of them were coming from rural area (61.8%). 34.7% received less than 10 years of education and 89% of patients were diagnosed with duct carcinoma.

In Healthy group, which comprises controls, 82.1% were living in joint family, 59.4% came from rural areas and majority (40.1%) had received less than 10 years of formal education. 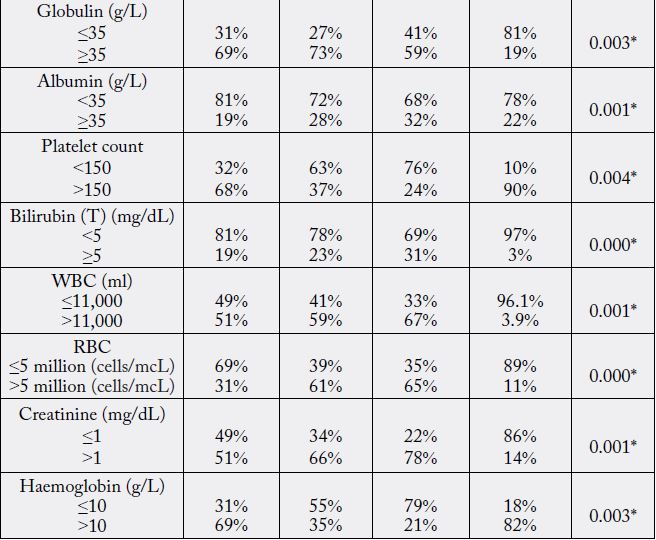 Table 3: Diet during Chemotherapy by Classification 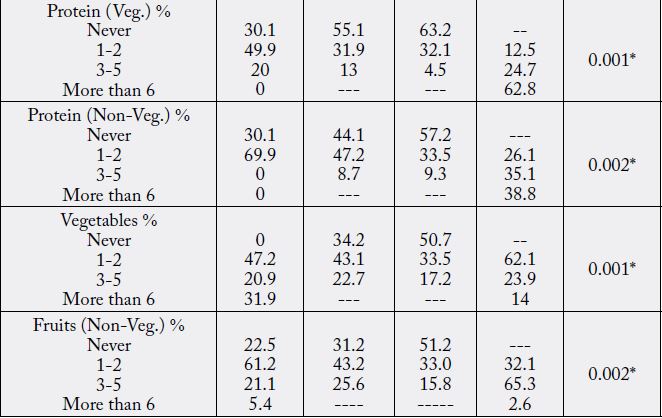 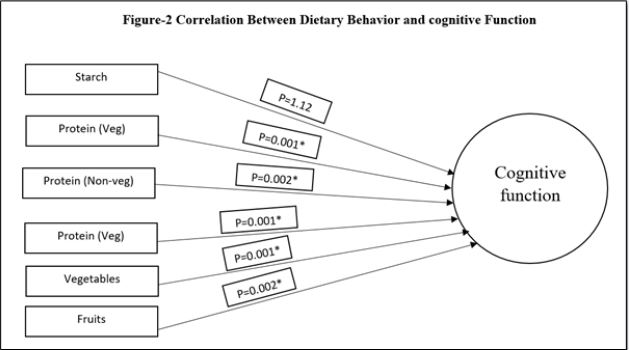 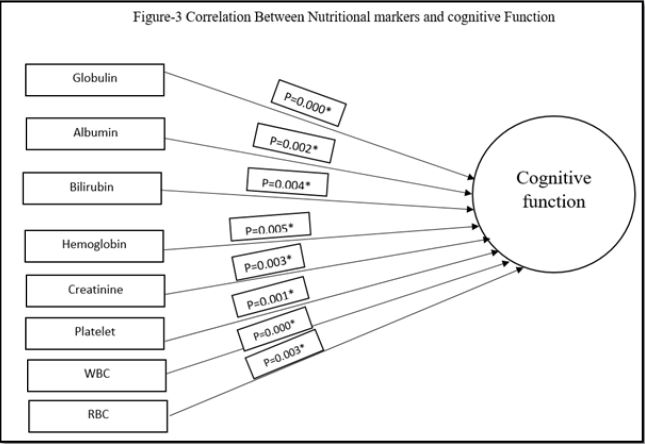 The Area under the curve of the ROC is 0.916 (CI: 95%; LB-UB 0.826-1.006). The nutrition value of 12.1 was considered the best value to discriminate positive and negative outcome scores for cognitive dysfunction for the nutrition deficiency. 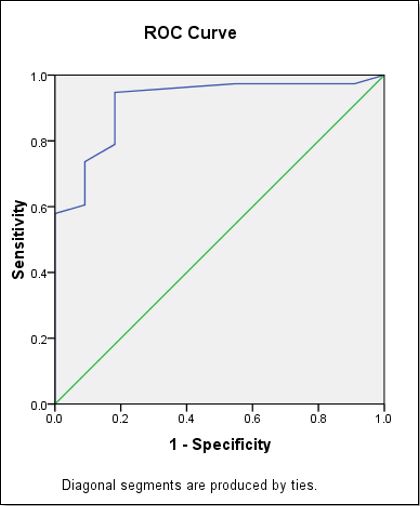 Figure 4: Nutritional deficiency which represents that the sensitivity of cognitive dysfunction

Discussion
Nutrition is an important part of life during the period of cancer treatment, recovery and prevention because being integrated to malnutrition is a contributing factor for reducing response in cancer prognosis. Simultaneously, malnutrition can also reduce patient’s strength and quality of life. Literature review showed malnutrition is associated with treatment toxicity, complications, reduction of physical functions and it decreases survival rate [10]. Moreover, patients may also have physical restrictions that reduce food intake and nutrient absorption such as mouth ulcers, diarrhea, vomiting, pain, intestinal obstructions or malabsorption [11].

The outcome of the previous research, reported increased prevalence of complication severe malnutrition group directly related to low intake of food during the period of chemotherapy. Supporting the previous research-documented result, it has been proved that the limitation of food intake is related to the decreasing quality of life among cancer patients. Along affected patients may experience loss of appetite resulting from altered appetite signals during the initial period of treatment [12].

We observed during the period of chemotherapy, patients experienced low intake of food. Hence, the patients reported issues such as, appetite problems, poor nutritional status, weight loss, and malnutrition. When we focused on dietary behavior/ several types of food intake, significantly correlated nutritional status variation (Table 3) because healthy diets include fruits and vegetables, especially ones that are red, orange, or dark green as well as for patients, the dairy products should be of non-fat or low-fat. The protein can have consisted through meat, fish, eggs, beans and soya products such as tofu, unsalted seeds and nuts. This dietary behavior was significantly associated with the cognitive deficit (Figure 3) because the previous research had evidenced that the enough fruit and vegetable intake are associated with better cognitive function in cancer survivors comparing with a healthy control group [21]. Another research had remarked that using Food frequency questionnaires (FFQ), an intake higher in dark and green leafy vegetables, cruciferous vegetables [22] fish [23], fruit [8], lower in organ meats, red meat, high-fat dairy, butter [22] and trans fat [24] are favorable for cognitive health.

We also observed correlation between nutritional and cognitive function status. For each cognitive domain (verbal fluency, object naming, MMSE, attention, memory and visual construction) could be influenced by components of the foods in the daily diet chart (Table 4). Low foods seemed to be associated with deficit in attention, memory, and functional capacity, while those rich in simple sugars were associated with difficulty in concentration and attention. Previous research had documented that lack of learning, reasoning, and memory were related to low the level of serotonin in brain because adequate supply of amino acids is essential for the synthesis of neurotransmitters, especially serotonin and catecholamines. Another cause of cognitive deterioration is a low intake of fat which is associated with better memory capacity and lower risk of cognitive deterioration [25]. Results from our study supports these findings suggesting negative impact of low nutritional status on cognitive functioning [26,27].

Conclusion
Significant number of middle age breast cancer patients has been suffering from severe level of malnutrition (52.25%). The level of cognitive impairment was directly associated with nutritional level. A good nutritional status was associated with better cognitive function. Assessment and attention to nutritional, physical, psychological and social status of patients could prevent early complications due to malnutrition and possibly cognitive impairment.

Limitations of the Study
This study has its limitations. It was conducted on a relatively small sample size. Most patients belonged to lower socioeconomic strata and had lesser number of years in terms of formal education, hence it cannot be said to be representative of all Indian women. No follow up was carried out except for a single sitting with breast cancer patients to look into their major concerns of life. Finally, we did not look into the possible protective factors against depression, and more specifically, impaired social cognition in cancer patients. We hope to address these issues in future studies.

Conflict of Interest
Authors have no conflict of interest.