Hypothesis on Glucose Production Communication Model Between the Brain and Other Internal Organs, Especially the Stomach and Liver via Studying Glucose Responses Due to Solid Food

Copyright © 2020 Dr. Gerald Hsu, C. This is an open access article distributed under the Creative Commons Attribution License, which permits unrestricted use, distribution, and reproduction in any medium, provided the original work is properly cited.


Abstract
Investigating the relationship between meals and postprandial plasma glucose by using glucose responses due to solid food. The author used a continuous glucose monitor device to collect data by focusing on different food inputs for 647 days. He tested his hypothesis on the communication model between the brain and certain specific internal organs via the nervous system by using his experimental data and various mathematical analysis tools. In this particular study, he focused on four different breakfast categories.

Introduction
In this paper, the author described his research results on investigating the relationship between certain type of meals and postprandial plasma glucose (PPG) by using glucose responses due to solid food.

Methods
In September of 2019, the author accidentally noticed his peak PPG at 60 minutes after his first bite of food from eating a pan-fried egg (protein and fat only) breakfast that reached ~150mg/dL, which is very similar to his McDonald’s breakfast’s PPG peak (including both “with” and “without” muffin or hash brown). This did not make any sense to him based on his 5-year long research from the relationship between diabetes and food nutrition. Therefore, the meal with egg alone should not generate such a high glucose peak. This incidental discovery challenged him into this particular research.

The author has used a continuous glucose monitor (CGM) device to collect 48,740 glucose data during the past 647 days (from 5/5/2018 through 2/11/2020 at ~75 glucose measurements per day). After the first bite of his meal, he measured his PPG data every 15 minutes for a period of 180 minutes. He focused on investigating the relationships between different food inputs, i.e. meal nutritional contents, cooking methods, physical phases, and different glucose response outputs, i.e. PPG waveforms (post-meal glucose curves). Based on his observation of physical phenomena, i.e. differences of glucose responses, he developed a physics hypothesis about the communication model between the brain and certain specific internal organs via our nervous system. He then tried to verify his hypothesis of this neuro-system communication model regarding PPG production using his experimental data and various mathematical analysis tools.

In this particular study, he focused on the following four different breakfast categories.

First, he ate 233 breakfasts at McDonald’s with one egg and one sausage patty (protein and fat only). He occasionally ate half of a muffin (15g of carbohydrates) or one hash brown (16g of carbohydrates). His averaged carbs/sugar amount was 10grams.

Second, he ate 80 McDonald’s breakfasts with eggs, without any muffin or hash brown, but sometimes mixed them with other ordered food. His averaged carbs/sugar amount was 7.9grams.

Third, he ate 30 pan-fried egg “solid shape” breakfasts cooked at home without any other food contents with carbs/sugar. His averaged carbs/sugar amount was 0.7grams.

Finally, the fourth meal category of 643 all breakfasts consisting of many different kind of breakfasts (both home cook and dine-out) in more than 20 different international cities. The averaged carbs/sugar contents of this category of these 643 breakfasts was 10.9grams.

It should be noted that the averaged post-breakfast walking steps for these four meal categories are between 4,400 steps to 4,700 steps. The author’s target exercise for post-meal walking is 4,000 steps. Since his four exercise amounts were above his target and very comparable to each other; therefore, he can just focus on the food’s direct impact on his post-breakfast PPG production.

Figure 1 shows the detailed data of this particular analysis. Two important phenomena of datasets from further analyzing these collected data are: 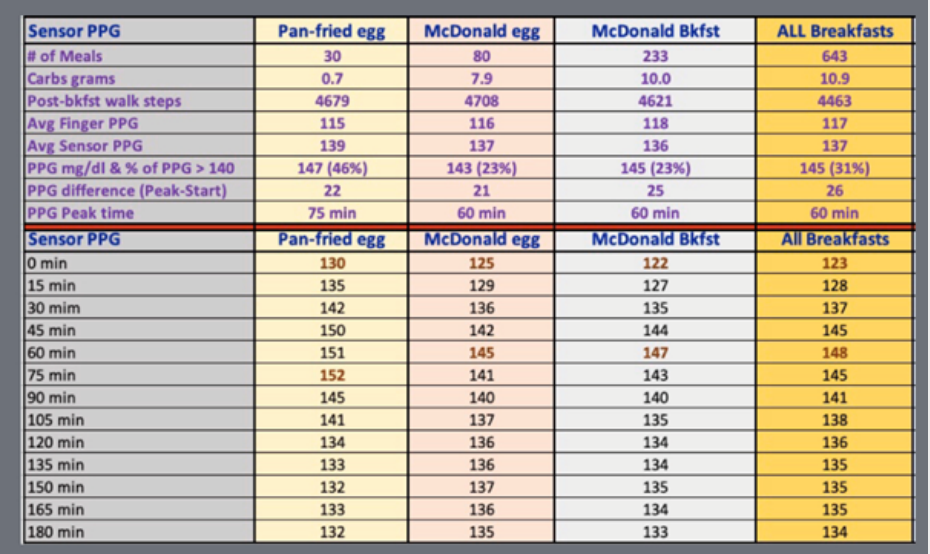 First phenomenon, the PPG difference between “peak” PPG (60-75 minutes after first bite) and “start” PPG (first bite of meal at 0-minute). All of these four PPG differences are very comparable, e.g. Pan-fried egg at 22mg/dL, McDonald’s at 21-25mg/dL, and All breakfasts at 26mg/dL. The reason he focuses on PPG difference between start and peak is that breakfast’s start PPG value at 0-minute is largely dependent on the morning time’s FPG value which has about five primary influential factors. For example, Pan-fried egg’s start PPG is about 5mg/dL to 7mg/dL higher than McDonald’s and All breakfasts.

Based on the observation of above phenomena, in summary, the PPG outcome of Pan-fried egg is remarkably similar to both McDonald’s and All breakfasts. However, from the food nutritional viewpoint, we know one large egg contains only 0.38g to maximum of 1g of carbohydrates which is much lower than the averaged carbs/sugar intake of 8g to 11g carbs/sugar from the other three breakfast categories. So, how can we explain the similarity of PPG curves between Pan-fried egg case and other three meal categories ?

We have learned from high school physics that three fundamental phases of matter are solid, liquid, and gas (vapor or steam). This particular breakfast study involves only solid phase food of 30 Pan-fried eggs, 80 McDonald’s egg breakfasts, 233 McDonald’s breakfasts, and 643 All breakfasts. Due to his acquired deep knowledge of relationship between food nutrition and diabetes, he has maintained a strong discipline of not eating high carbs/sugar food in most of his meals. That is the reason why all of these four PPG curves are clustered together, as shown in Figure 3. However, his other three meal categories containing ~10g carbs/ sugar, in theory, should generate a much higher PPG peak values and a higher averaged PPG values than Pan-fried eggs (~1g carbohydrates). Or, the pan-fried egg meals should generate a much lower PPG values and curve from its averaged 0.7 gram of carbs/sugar. Why the observed glucose curve and data of Pan-fried egg are so different from the theoretically predicted glucoses from nutrition viewpoint?

The author has learned three basic facts from his past 9-year of medical research work. First, 70% of our daily energy intake are consumed by our brain and nervous system. Second, the brain is the only internal organ which has the power of cognition, judgement, information processing, and marching order issuance. Third, all of our internal organs are working closely together but under the control of the single command center, the brain.

The author has one hypothesis that the glucose produced by the liver is based on the marching order issued from our brain. When one particular food type enters into gastrointestinal system, stomach will immediately send a “food entry” signal to brain to inform about the arrival of food and its physical phase, rather than the detailed carbs/sugar amount which would be send to brain at a later time. After receiving this input signal from the stomach, our brain will then process its received information, make judgements and decisions, and then issue the appropriate marching orders to our liver regarding how much glucose amount should be produced and within what time frame to reach to its peak (of course, exercise also plays a role here).

This particular case study challenged the author to delve deeply about our brain and neuro-system functions using multiple meal categories of food input and glucose response output. This hypothesis explains the author’s view on how the brain communicates with both the stomach and liver via the nervous system regarding glucose production during a finite period after the first bite of food.

At the same time, the brain will also inform our pancreas regarding how much insulin should be produced when an excessive glucose amount is produced by the liver. However, for severe diabetes patients whose pancreatic beta cells are damaged, their insulin production capabilities will not function accurately or properly as a normal person [1-5].

Conclusions
The author is trying to apply a scientific method by using his math-physical medicine (MPM) and exploring our brain and neuro-system’s role in our glucose production process from a neuroscientific viewpoint.

By sharing his research findings with other fellow medical research scientists, he hopes that they can also provide some explanations regarding this phenomenon by using a different or traditional research methodology such as biochemical medicine (BCM) approach.