Copyright © 2020 Dr. Mofeed Al- Nowihi, et al. This is an open access article distributed under the Creative Commons Attribution License, which permits unrestricted use, distribution, and reproduction in any medium, provided the original work is properly cited.

The aim of this study is to investigate the capacity of flower extracts of Tapinanthus globiferus to reverse pancreatic injuries in alloxan-induced hyperglycemic mice.

Diabetes mellitus (DM) is a chronic metabolic disorder, which affects over 150 million people in the world today, and this will be doubled by 2025. DM is considered the sixth leading cause of death globally.

A total of 36 male Wistar albino mice allotted into six groups of six mice each. They were kept in standard environmental conditions for one week and fed formulated mice food and water. The investigation was carried out for 1 week for the induction of diabetic condition by Alloxan and the following day was an experimental period with extract of Tapinanthus globiferus.

Histological images of pancreatic tissue sections were captured using the camera under a light microscope. Blood samples were collected through the tail vein and the basal fasting blood glucose (BG) was measured by digital Blood Glucometer.

Histopathological studies of the untreated hyperglycemic mice showed evidence of hypertrophy and disarrangements of the pancreatic tissue. The architecture of pancreatic tissue showed evidence of varying levels of necrosis and restoration of cellular integrity following treatment by treatment with extract of Tapinanthus globiferus. However, herbal treatments reduced the hemorrhage of the islet and pancreatic acini, In addition, Recovery from necrosis in the pancreatic acini and minimal necrotic cells.

Introduction
Diabetes mellitus (DM) is a chronic metabolic disorder, which affects over 150 million people in the world today, and this will be doubled by 2025. It is considered the sixth leading cause of death globally and It characterizes by degeneration of carbohydrates, protein and fat metabolism. Such alteration results in increased blood glucose, which causes long-term complication in many organs [1].

Tapinanthus globiferus is called "Hodal" in Yemen. It is a specie belongs to the genus Tapinanthus (Family Loranthaceae). It is a parasitic plant grown on various host plant large amount worldwide [2]. The earlier investigation reported on pharmacology activities like astringent, diuretic, narcotic and used in India for the treatment of mania, tuberculosis, asthma. Also, it is useful in wounds, menstrual disorder, prevention stones in kidney & bladder, abortion during pregnancy and hemorrhage [2]. Also have anticancer activity [3], Antimicrobial and antioxidant activity [4], Antihyperlipidaemic and Antidiabetic Activity [5,6]. Also, the parasitic plant Tapinanthus globiferus, reported containing biologically active substances such as flavonoid, quercetin [7]‚ tannins, Beta-sitosterol‚ Beta- amyrin, oleanolic acid. Herbal drugs are frequently considered to be less toxic and without side effects, than synthetic ones. The present study was directed at investigating the anti-hyperglycemic activity of Alloxan-induced diabetic mice and sub-cellular and cellular changes in the pancreas and the effect of plaferon in alloxan-induced diabetes mellitus.

The flowers of T. globiferus were finely powdered (850)g then extracted by maceration with methanol with shaking using a shaker for three weeks at room temperature. The extract was concentrated under vacuum in rotary evaporator at 40C of temperature to obtain 111g semisolid extract (crude extract). Apart from the crude extract was further fractionation with chloroform, Ethyl acetate, methanolic and aqueous.

Phytochemical screening was performed using standard procedures in the detection of different classes of phytoconstituents like flavonoids, alkaloids, triterpene glycosides, saponins, tannins, amino acids, Anthraquinone and flavonoids present in the each of the plant fraction [8-10].

Young Swiss-albino mice, average weight 20- 30gm were used for the experiment. They were kept in standard environmental conditions for one week for acclimation after their purchase and fed formulated mice food and water. Alloxan monohydrate was used to induce diabetes. Blood samples were collected through the tail vein and the basal fasting blood glucose (BG) was estimated by digital Blood Glucometer. They were injected with Alloxan (120mg/kg) i.p. (Intraperitoneal) Dextrose 5% solution was administered via feeding bottle, to recover from early hypoglycemic phases. The blood glucose level was again monitored after 7 days. The animals showing elevated blood glucose (BG) levels above 200mg/dl were selected for study [11]. They were housed individually in cages and were kept at constant room temperature and 12 hours light and 12 hours dark cycle in the "Animal House" at the college of science/Department of biology/ Sana'a university.

A total 6 adult Swiss albino waster mice of both sexes where selected randomly from six groups, weight (20 - 30)gm. were used in this study, they were isolated in a relatively controlled environment at a temperature of about 25Co, in the ″Animal House″/ university of Sana’a - college of science. Mice were anaesthetized by Ether, and then the abdominal cavity was opened, pancreas was removed and blood sample was obtained by Normal Saline. Pieces of pancreas of 6 experimental subjects were sampled in the 7th day after Alloxan injection and T. globiferus (50-100-200mg/g) was administered consequent days in the 8th day after the experimental induction of diabetes in 6 subjects.

On the last day of the experiment the mice were anesthetized by Ether and the whole pancreas were carefully dissected out, remove any blood by Normal Saline. The pancreatic tissues were fixed and kept in formalin, On 1day, they were placed in 70% alcohol, then transferred to a graded series of ethanol (40-100%). then cleared in xylene. The pancreatic tissues were processed and embedded in paraffin wax. Then the samples were cut into 5μm thick sections and stained with Hematoxylin and Eosin (H&E) then observed Histopathologically under light microscope 400x - 50x. The severity of pancreatitis was determined by the degree of edema, hemorrhage, hypertrophic and necrosis, fatty change [12]. 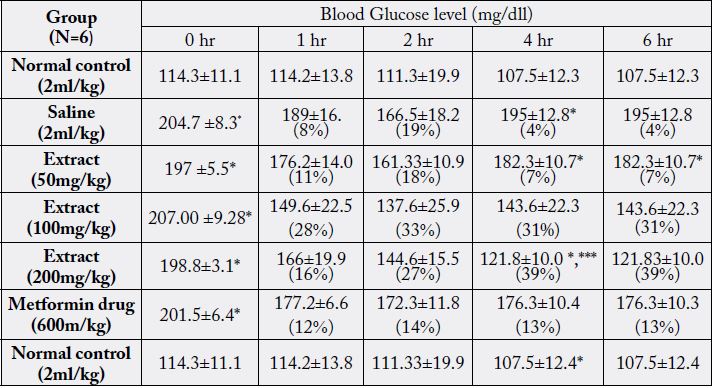 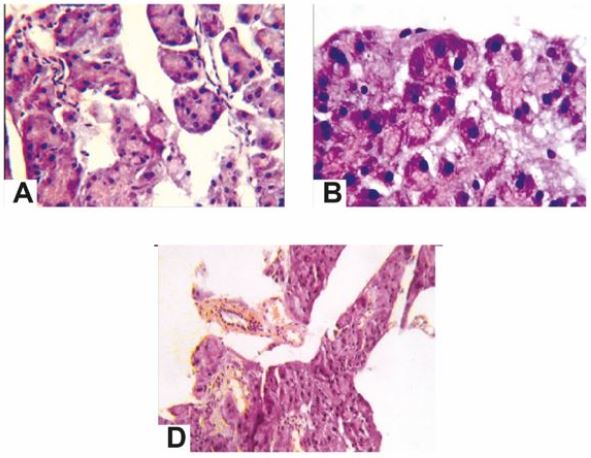 Figure 1: Sections of Alloxan diabetic pancreatic tissue treated with Saline (Hx. & E400X). A, Reduction in Beta-cell number is demonstrated his-pathologically. B, Fatty changes in pancreatic acini. C, Necrosis in the islet of Langerhans. 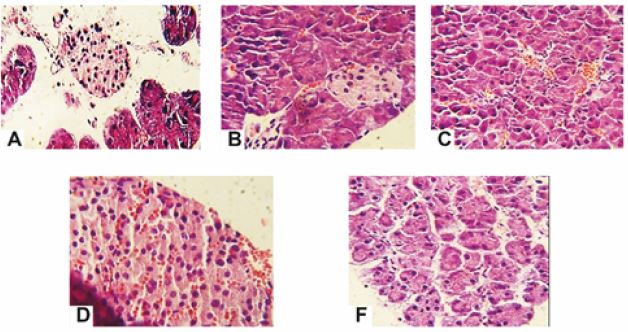 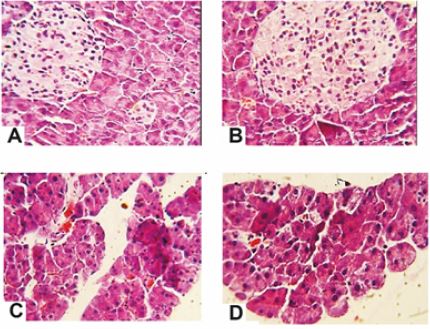 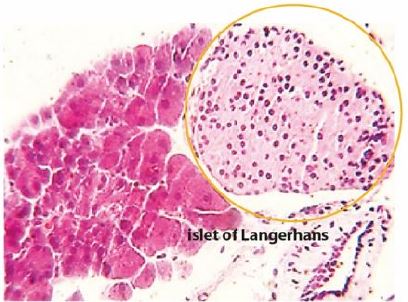 In this present study, no spasm of afferent arterioles or dilatation of the insular vessels was observed. Since the changes in the microcirculation follow the changes in the beta cells, it is possible that the vascular abnormalities are secondary to the local damage in the islets caused by Alloxan

Discussion
Many traditional plants used as a treatment for diabetes mellitus are used throughout management of diabetes without any side effects is still a challenge to the medical system. This has lead to and increasing demand for natural product with anti-diabetic activity and fewer side effects. This current study found that might herbs and plant product have been shown to have hypoglycemic action. Flavonoids are known to be bioactive anti-diabetic principles.

Catechin possesses potential agonist characteristic that is capable of activating insulin receptor and peroxisome proliferator receptor gamma. These results confirm that hypoglycemic effect of catechin. At optimum dose of catechin there was increase in the hepatic glycogen levels. Glycogen synthase activity was found increased significantly whereas glycogen Phosphorylase showed ad decrease, showing that hypoglycemic effect of catechin is due to increased glycogenesis and decreased glycogenolysis [7,14].

It is concluded that quercetin, a flavonoid with antioxidant property brings about the regeneration of the pancreatic islets and probably increase insulin release in STZ induced diabetic rats, thus exerting its beneficial anti-diabetic effect. Quercetin is effective in controlling hyperglycemia in animal models of 57 diabetic mellitus, it is effective suppresses postprandial hyperglycemia in STZ induced diabetes rats leaded with maltose. Which may be attributed to alpha - glycosidase inhibition. It also could be used as a potential supplement for treating postprandial hyperglycemia. Querictin itself was evaluated to possess anti-diabetic effect by reducing the blood glucose level of diabetic rat 810- days of treatment [15].

The study result showed that rutin more activity when compared to other three flavonoid. The proposed mechanism of action may be by increasing the peripheral utilization of glucose transporter activity from intestine. The order of hypoglycemic activity observed was Rutin > Quercetin > Ellagic acid >Boswellic acid. Rutin decrease of blood levels glucose and glycosylated hemoglobin (HbA1c) in patients with diabetic mellitus. Rutin significantly enhance the insulin release from isolated islets of Langerhans in animal model, whereas intestinal glucose absorption was significantly decreased.

Gallic acid is a competitive inhibitor for Alpha- glycosidase at the same time, it inhibited.

Alloxan diabetes has been studied in many species, including mice. The decrease in the total number of islets after the injection of alloxan indicates that some of the islets are damaged beyond recognition and probably are destroyed completely. In the recovery of the mice from alloxan diabetes, replacement of the beta cells occurs solely by budding of the islets from the small pancreatic ducts, and no evidence of acino-insular transformation.

Conclusion
Diabetes mellitus has already emerged as an alarming disease world-wide affecting the public health much. Though presently available therapies against the disease reduce the sufferings to some extent, still it remains inadequate and at the same time is costly, and also associated with a lot of side effect. The presence of flavonoids, tannins, steroids and/or terpenes in the flowers of T. globiferus either as single constituents or in combination may be responsible for the observed anti-diabetic activity. The extract of the flowers of this plant shows promising anti-diabetic activity looking at the level of blood glucose reduction tendency of the extract. T. globiferus extract in a dose of 100mg/kg produced an effect comparable to metformin (600ug/kg). Unfortunately, this study has achieved its objectives in the flowers extract provide that the extract has high anti-hyperglycemic activity. In addition, the study provides in histological examination in the pancreatic tissue that diabetic mice were treated by different concentration of extract showed slight hemorrhage in islet and minimal necrotic cell and reduction no. of beta cells, Also the study suggest that the treatment with T. globiferus extract recovery from necrosis was very moderate in the pancreatic acini.

Acknowledgement
The authors are grateful to Miss. Fatima Al-Futaini and Miss. Anesa Al-Mansori, for them guidance, support and sedulous approach they upheld during our study.

Conflicted of Interest
The authors declare no conflicts of interest regarding the publication of this paper.