Copyright © 2020 Dr. Bandiya, H. M., et al. This is an open access article distributed under the Creative Commons Attribution License, which permits unrestricted use, distribution, and reproduction in any medium, provided the original work is properly cited.

Observations on the nymphal instars of Macrotermes bellicosus were made to determine the applicability of Dyar’s law. Fifty nymphs each of various sizes were collected from three different mounds of M. bellicosus. The nymphs were sorted and then placed in Petri dishes separately. The heads widths of the nymphs were measured using micrometer slides. The recorded head widths were then plotted on a graph to observe if the growth ratio in head width follows a geometric progression in agreement with the Dyar’s law. Based on the frequency distribution of the width of the head capsule of the nymphs, 12 nymphal instars were recognised.The nymphal growth shows a geometrical progressive increase in the head width of the nymphs in successive instars with a growth ratio of 1.14 following Dyar’s Law. This suggests that the nymphs of M. bellicosus showed a geometric progression in agreement with Dyar’s Law.

Introduction
Macrotermes bellicosus (Smeathman, 1781) belongs to group of insects commonly called termites it is commonly called African mound- building termite. Like other termites they are polymorphic social insects that live in self-constructed mounds called Termitarium. The individual termites within the termitarium constitute a colony that comprises several castes that are morphologically and functionally distinct [1,2]. They are soft-bodied, moderate to small size insects with biting mouthparts. The bodies of flying individuals are dark but those that remain in the nest are whitish with only their heads being pigmented heavily [2,3]. The wings in termites are temporary, long, and slender and in two pairs that are similar to each other. They are deciduous and are quickly shed with a single flick when the swarming termites find a new nest site, pair up and dig in [4,5]. M. bellicosus is a fungus- growing termite that cultivates symbiotic fungi in their nest [6]. Most termites cannot digest the wood they consumed, instead they rely primarily on symbiotic protozoa and other microbes in their intestines to digest the cellulose for them, absorbing the product for their own use (Logan et al., 1990) [1,2].

Termites are widely dispersed throughout the tropics as well as some temperate regions and achieve their highest diversities and abundance in the rain forest of Africa, South America and Southeast Asia [7]. There are about 2753 valid names of termites in 285 genera around the world (Anonymous, 2020) [8].

Termite mound is one of the common features of most agro- ecosystem in tropical Africa (Wood and Sands, 1978) [9,10]. Termites are the dominant arthropod decomposers in lowland and tropical forests [9,11]. They have great impact on plant litter decomposition and carbon cycling in tropical ecosystems [10]. Termite nest building activity inevitably influence soil functions and processes and preserves soil and ecosystem diversity [12,13]. They also mix soil matter, thereby increasing their fertility [14,15], they play a central role in nutrient fluxes [16,17], their activities such as mound-building, subterranean tunnelling as well as soil-feeding improves soil structure and quality [18-21].

Termites are also important in habitat creation, nutrient cycling and they form a pivot upon which other components in the ecosystem depend [22]. They also serve as food for countless predators including man [23,24]. They are also a good supplementary substitute in chicken feeds Musa et al. (2004) [25]. Termites are also considered ecological engineers as they modulate the availability of natural resources to other organisms [12,21,26,27].

Termites have long been recognized as both domestic and agricultural pests [24]. The most significant effect of termites on man is the damage done to timber used in buildings and for other purposes [1]. Among their destructive effects is damage to structural timber and other materials in structures. Damage extends to household furniture, paper products, many synthetic materials and food items [28]. They also damage underground cables and airfield, earthen dam and irrigation ditches [29]. They are reported consuming selected components of living and dead vegetation and modifying certain properties of the soil that influence the growth of plants [1].

M. bellicosus was considered a popular termite in Nigeria [5] and reported as pest of several crops that included Maize [30], Groundnut [31], Sugarcane [32], Rice [33] and Cocoa [34]. The mounds of Macrotermes were found to affect the tree flora of several ecosystems being a source of heterogeneity in the landscape [35]. Few studies have been done on pestiferous mound- building termites in north-western Nigeria and apparently no documentary evidence on their development, identification, damage and economic losses in the region are available. The present research is undertaken to determine the applicability of Dyar’s Law and the number of nymphal instars of M. bellicosus.

Methodology
To study the sizes of the head width of the nymphs of M. bellicosus within the mounds, three mediumsized (between 1.50 - 2.49m in height) mounds were selected randomly from Fadama Land along River Rima in the Permanent site of Usmanu Danfodiyo University, Sokoto, Nigeria, and measured. The mounds were excavated and materials from them were collected and brought to Entomology Laboratory in the Department of Biological Sciences, Usmanu Danfodiyo University, Sokoto, Nigeria. The termites were separated from the mound’s soil in the laboratory by floatation methods as described by Collins (1981) [4].

During the separation process, the collected soils were first transferred into buckets separately and then water poured unto each. The resulting slurry was stirred with a pipe connected to a running tap. Floating individuals were skimmed off using sieves, while sunken individuals were collected by pouring the fluid through sieves.

Fifty nymphs each, of various sizes was randomly sampled from materials collected in each of the three mounds mentioned above and then placed in Petri dishes separately. The heads widths of the nymphs were measured using micrometer slides and recorded. The recorded head widths were then plotted on a graph to observe if the growth ratio in head width follows a geometric progression in agreement with the Dyar’s law and the numbers of the instars were also noted.

Results and Discussion
Head widths of various nymphs as observed are presented in Table 1. The Table indicates that the head width ranges from 4 to 16µm. The results, when plotted on a graph to observe the pattern of growth among the nymphal instars, showed a geometrical progressive increase in the head width of the successive instars (Figure 1). 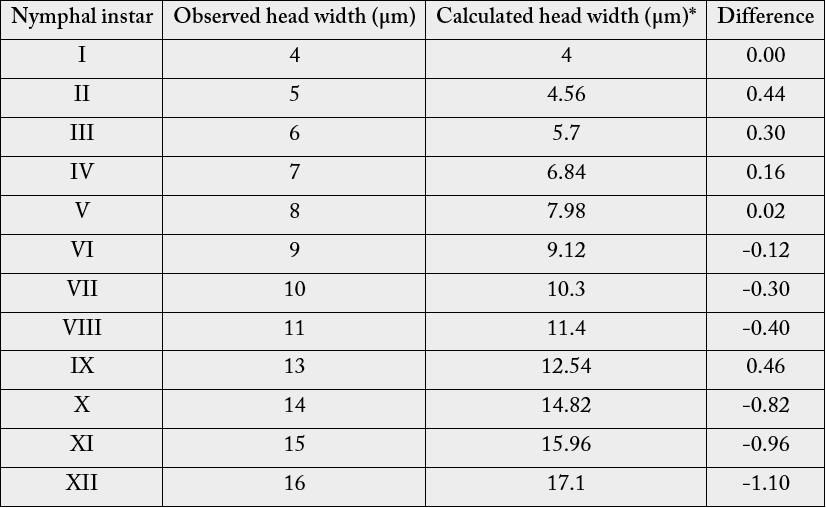 *= observed head width x average growth ratio of the head width of the nymphal instars (1.14) (Observations Based on Three Replicates) 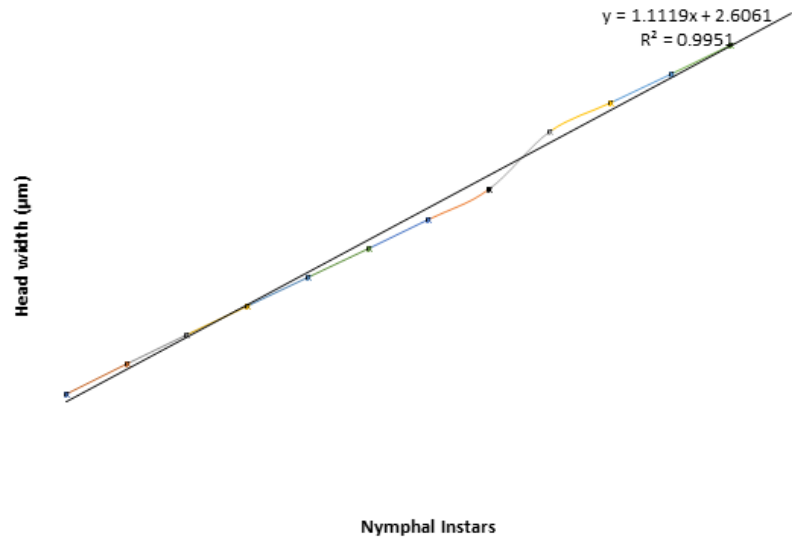 The frequencies of head width of nymphal instars suggested about 12 nymphal instars among the observed samples. The ratio of the increase in the head width obeyed Dyar’s rule as was observed in the results. The size of the head capsule increased successively in geometric progression with an average growth ratio of 1.14. This resulted into a linear relationship between the head capsule and the development period. Similar observations were made by Majeed and Aziz (1979) [36] who reported close proximity between the observed and the calculated head widths and increase in the head width of different instars of Gastrimargus transversus in a geometrical progression are suggestive of the applicability of Dyar’s Law. Also, Opoosun and Odebiyi (2009) [37] reported similar observations on Galleria mellonella (Lepidoptera) larvae and Oke and Odebiyi (2010) [38] on Podagrica uniforma (Coleoptera) [39-41].

Conclusion and Recommendation
Based on the above observations, we scan therefore conclude that the frequency distribution of the width of the head capsule of the nymphs, 12 nymphal instars were recognised. The nymphal growth shows a geometrical progressive increase in the head width of the nymphs in successive instars with a growth ratio of 1.14 following Dyar’s Law. This suggests that the nymphs of M. bellicosus showed a geometric progression in agreement with Dyar’s Law.