Copyright © 2020 Dr. Nasuhi Engin. This is an open access article distributed under the Creative Commons Attribution License, which permits unrestricted use, distribution, and reproduction in any medium, provided the original work is properly cited.

Ectopic breast tissue (EBT) may occur unilaterally or bilaterally anywhere along the embryonic milk line that extends from the axilla to the groin. Any disease that affects the normal breast can develop in the EBT. A fibroadenoma in the axilla of a young female patient which was clinically thought to be a pathologic lymph node process such as metastasis or lymphoma is presented here.

Case
A 20-year-old woman presented with a complaint of a firm 2cm firm, painless, freely mobile mass completely isolated from the breast tissue in the left axilla. Ultrasonographic examination revealed bilateral regular breast tissue and a 2cm nodular well delineated, heterogenous mass. Since the hilar region was not clearly defined there was a suspicion of a malignant process such as metastasis or lymphoma. Fine needle aspiration cytology (FNAC) yielded cohesive ductal epithelial cell groups and dispersed isolated cells (Figure 1) without any lymphoid cell population. There was no nuclear atypia, mitosis or prominent nucleoli and few oval, bipolar myoepithelial cells were present (Figure 2). These findings pointed to a benign epithelial lesion possibly a fibroadenoma in ectopic mammary tissue. An excisional biopsy was made. Histopathologic sections of the excised mass revealed a canalicular type of fibroadenoma (Figure 3) with a spindle cell stroma devoid of myxoid features. 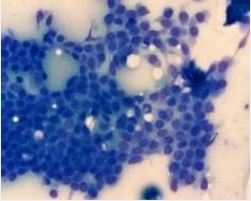 Discussion
It is estimated that about 2-6% of women have axillary EBT [1,2]. This case is a clear cut fibradenoma developing from EBT since the nodular mass was located in an anatomically superficial location in the subcutaneous tissue which was not characteristic of an extension of the breast parenchyma forming an axillary tail [3,4]. Reported cases of fibroadenomas in axillary EBT seems to be low in number reaching only a total number of eleven cases in 2011 [2]. It is important to remember that malignancies can also be seen in EBT making an excisional biopsy mandatory [2-5]. In a series of twenty-two patients with axillary EBT there was a wide range of clinical diagnoses [6] but cytology and/or biopsy excision was definitive.

Conclusion
Pathologic processes related to EBT should be kept in mind in the differential diagnosis of axillary swellings in females [1-6]. FNAC is a useful, non-invasive, quick outpatient diagnostic procedure in evaluating superficial soft tissue masses.