Influence of Socioeconomic Variables on Spectacle Use in South East Nigeria

Copyright © 2022 Dr. Nkiruka Okoloagu, et al. This is an open access article distributed under the Creative Commons Attribution License, which permits unrestricted use, distribution, and reproduction in any medium, provided the original work is properly cited.

Uncorrected refractive errors (URE) is the commonest cause of mild and moderate visual impairments in Nigeria. Spectacle -mounted lens, an extremely cost effective intervention has remained greatly underutilized in Nigeria. Aim: To explore the perspective of current and prospective spectacle users to gain an insight into the basis for non compliance and occasional rejection of prescription spectacles for URE.

Two hundred and six subjects, with a male to female ratio of 1:1.8 and age range of 18 to 94 years were analyzed. Civil servants were the largest occupation group(n=62), followed closely by traders(n=54). About 41% of our respondents had tertiary education (n=80) while 7%(n=15) had no form of formal education. One hundred and thirty nine subjects(67.5%) of subjects has worn glasses at a point with 40.8%(n=84) of them knowing why they were offered glasses, 36.4%(n=74) did not know the reason for the prescription while the remaining 22.3%(n=47) did not remember. Opinions on the therapeutic use of glasses showed that 15% of these subjects believe that spectacles can treat all eye conditions including cataract and glaucoma. There was a statistically significant association among the assessed variables demographic groups and therapeutic uses of spectacles with subjects educational background being the strongest.

Majority of our subjects readily subscribe to spectacle use amongst adults. However, significant knowledge gap still exists and is influenced greatest by educational background. The eye care giver has a duty to help bridge knowledge gap amongst different social groups and dispel erroneous beliefs through health education.

Introduction
Uncorrected refractive error (URE) is the leading cause of avoidable visual impairment in the world [1]. The global estimate for visual impairment attributable to uncorrected refractive error (URE) in the year 2020 was 127.7 million with another 8 million individuals functionally blind. The cost to the world economy has been put at a staggering USD $269 billion when computed as loss in productivity [2,3]. In Nigeria, uncorrected refractive errors is the commonest cause of mild and moderate visual impairment (77.9% and 57.1% respectively) being responsible for visual impairment in 2.46 million adults (acuity of <6/12-6/60) [4]. Refractive errors can be neutered with spectacle-mounted lens, contact lenses or refractive surgery. However, spectacle-mounted lens is the commonest form employed [3]. Spectacle correction for URE is an extremely cost-effective health intervention but its use has remained stunted in developing world, a demographic that contributes more than 90% of individuals living with refractive errors [5,6]. Nigeria is Africa’s most populous country but has a reported spectacle wearing- rate as low as 7.8% [7]. Fingerpointing regarding this anomaly has been directed at different entities. Persistent negative views about what and how spectacle correction works, cosmetic concerns, fear of social stigma, spectacle intolerance and cost are notable culprits [8-10].

This study seeks to explore the influence of socioeconomic variables on the perspective of current and prospective spectacle users. This could help to gain an insight into the immediate and remote basis for non compliance with spectacle use and its occasional rejection by patients.

Method
A descriptive cross sectional double-centre study was done to assess the disposition of our outpatients to prescription spectacle use. The centers employed for the study were Enugu State University Teaching Hospital and Guinness Eye Centre Onitsha, Anambra State both in South-Eastern Nigeria. The study was conducted concurrently over a 4-month period in both centres between December 2021 to March 2022. To arrive at an appropriate sample size, a previous population-based survey in the area put the prevalence of prescription spectacle use at 7.8% [3] and this was adopted in the present study.

Sample size= 111 patients. However, we interviewed a total of 206 subjects to increase the power of the study.

• Consent to participate in the study (appendix i)
• Age of 18 years or above
• Ability to understand the research questions and communicate a clear response.

A semi-structured interviewer based questionnaire was used to obtain research-relevant information (appendix i). The first segment covered information relating to the biodata of the subjects including occupation and formal educational status. The interview was conducted by the authors after the scheduled clinic consultation and informed consent was sought for and given by the subject in a language that patient understood (Igbo or English language-appendix i). On the average, 7 minutes was taken to interview a subject. Failure to obtain consent and difficulty in understanding the research questions were basis for exclusion from the study.

The data obtained was cleaned prior to analysis with SPSS 25.0 (SPSS Inc., Chicago, IL, USA). The association between discrete variables was tested using the Chi square test and a p<0.05 was considered statistically significant.

Result
A total of two hundred and twenty (220) consenting subjects were interviewed but only two hundred and six (206) respondents were suitable for analysis after data cleaning. Females were one hundred and thirtyfour (134) while males were seventy-two (72), representing a male to female ratio of 1:1.8. The ages of the subjects ranged from 18 to 94 years with a modal age of 51 to 61years, comprising 21.8% (n=45) of our cohort. Civil servants were the largest occupation group (n=62), followed closely by traders (n=54). About forty-one percent of our respondents had tertiary level (n=80) while only about seven percent (n=15) had no form of formal education. The aforementioned biometrics is summarized in the table 1.

Table 1: Summary of demographic attributes of the subjects. 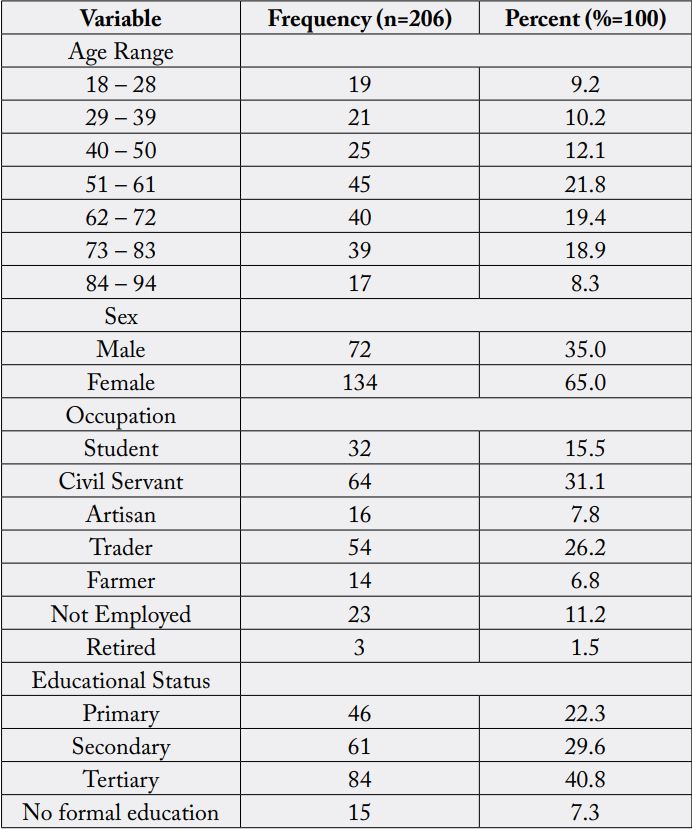 A total of one hundred and thirty nine subjects representing 67.5% had worn glasses at a point while the remaining 32.5% have never worn glasses (fig 1) 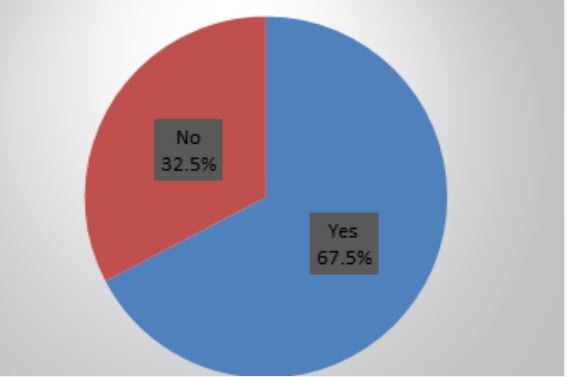 Figure 1: Pie chart representation of spectacle use among respondents

Eight subjects from which 5 were females, admitted to refusing use of spectacle despite a prescription from a doctor. Their ages were 38,47,52,60,61,64,67 and 68 years. Only one of those who refused spectacle prescription has no formal education, 4 subjects has primary education, 2 secondary education and 1 tertiary education. The commonest reason for the refusal was inconvenience with using spectacles (table 2).

In the spectacle wearing group, 73.4% had cause to change their glasses at least once (fig 2). The commonest reason for change is damage to the frame and or the lens (40.1%). Other reasons cited are shown in table 3. 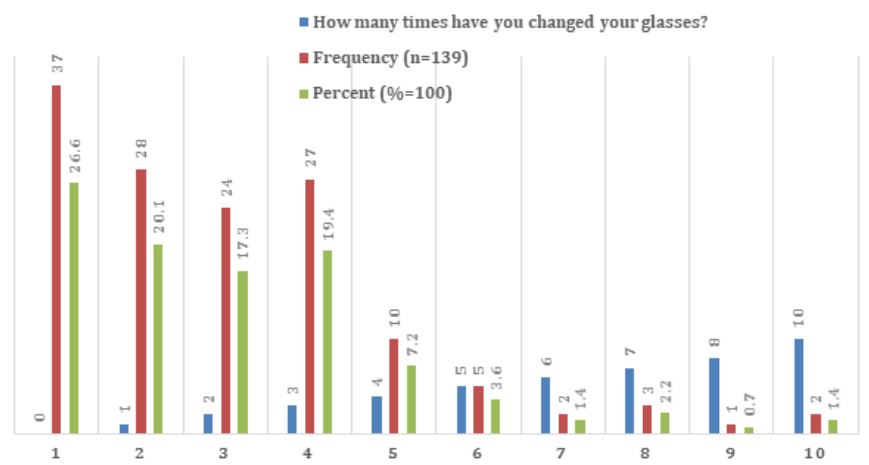 Opinion on the therapeutic uses of prescription glasses was sought. Apart from treating errors of refraction, about 15% of our subjects believed that spectacles can treat all eye conditions including cataract and glaucoma. Cross tabulation for sex, occupation and educational status were statistically significant. This is shown in table 5. 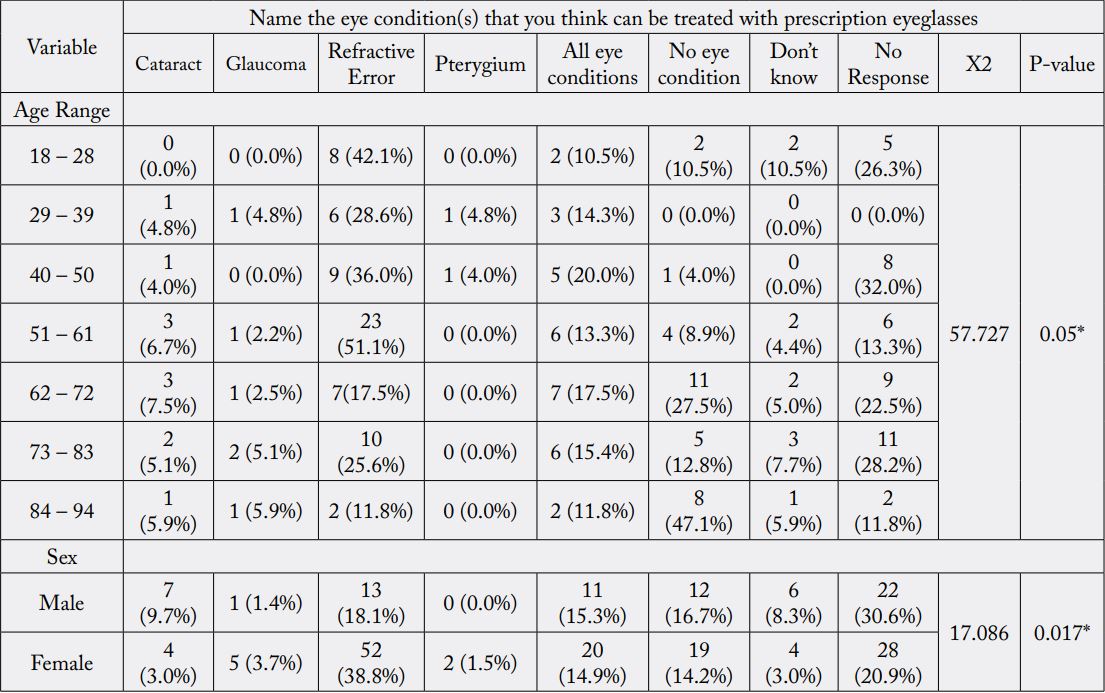 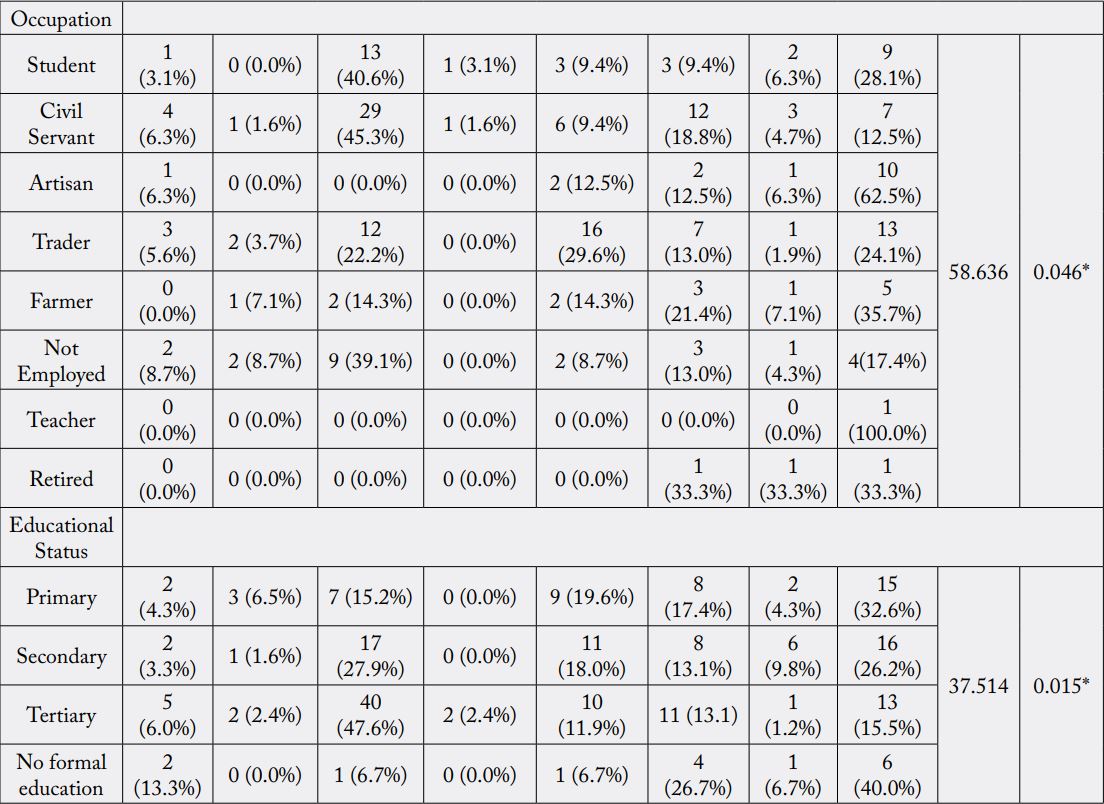 *=There was a statistically significant association among the assessed demographic groups. The strongest variable was subject’s educational background (p=0.015)

Discussion
Spectacle- mounted lens is the mainstay for treatment of refractive errors and presbyopia in patients with distant and near visual impairments [11]. This has made it possible for an aging population to remain economically viable because individuals can continue to do near work. The hospital prevalence of spectacle use in the present study was 37%. This is higher than a similar study done in Ekiti State and Jos, Plateau State both in Nigeria (21.4% and 20.7% respectively) [11-12]. However, both studies excluded subjects with presbyopia. Females, while accounting for 63% of our subjects (n=124), represented 70% of respondents currently using spectacle correction. The female preponderance is widely reported in literature [5-10,13,14]. This has been reported in other aspects of health care and allusions to the traditional view among males that they need to project strength has been made in several studies [15-17]. Eight subjects (3.9%) admitted to rejecting prescription glasses in the past. The commonest reason for refusal was a perceived inconvenience that may come with wearing glasses 5(62.5%). The other reasons cited being glasses being cosmetically undesirable and fear of spectacle-induced deterioration of existing eye condition. Studies done in Western Nigeria reported similar sentiments but the proportion of their subjects averse to spectacle use were much higher [9,18]. They also reported inability to pay for the eyeglasses as one of the barriers for non-use which was not seen in our study. It is reasonable to assume that passage of time has led to wider acceptance of spectacle use and increased willingness to pay for the service in our study area.

Replacement of prescription glasses was common among our subjects, 74.4% having changed their glasses at least once. Inadequacy of the prescription to address their visual need was the leading reason 56(40.1%). Spectacle intolerance accounted for 20.1% (n=28) of change of glasses. Other circumstances were misplacement of spectacles, broken frame/scratched lens and poor frame fitting. Despite the fact that these changes translated to increased doctor- patient interactions, 58.9% of subjects did not know the ocular condition the glasses given to them was meant to treat. About forty-one percent were not educated by the doctor while another twenty-percent had forgotten their diagnosis. No comparable study was seen in literature that assessed this variable. It thus appears that eye care providers are not communicating adequately with their patients.

An interesting outcome from the study is a diametric and equal belief by the subjects that spectacle correction can treat all ocular conditions 31(15%) and that it cannot treat any eye condition 31(15%). Another 6(2.9%) believed glaucoma can be treated with glasses while 11(5.3%) subjects believed glasses can be used to treat cataract. There could be a causal relationship between these assertions and late presentations by our patients with pathological eye conditions especially glaucoma. Unfortunately, there was no relevant study for comparison and further inquest is needed.

Conclusion
Prescription glasses is an indispensable armamentarium in ophthalmic practice because it brings tangible improvement to the visual acuity of eligible patients. A majority of our subjects readily subscribe to use of prescription glasses. The view among a significant proportion of our subjects that glasses can cure all eye diseases is worrisome and can encourage late presentation for non-refractive eye diseases. A significant knowledge gap on spectacle use still exists amongst our subjects and is influenced greatest by educational background. This warrants further studies to explore the nature of this association. The eye care giver has a duty to educate patients on nature of their ocular ailment, bridge knowledge gaps amongst the different social groups and dispel erroneous beliefs.

Conflict of Interest: None to report.