Copyright © 2021 Dr. Jesha Mohammedali Mundodan, et al. This is an open access article distributed under the Creative Commons Attribution License, which permits unrestricted use, distribution, and reproduction in any medium, provided the original work is properly cited.

Thyroid disorders and Diabetes mellitus (DM) are the two most common endocrinopathies encountered in practice. It has long been recognized that thyroid hormones have marked effects on glucose homeostasis but there is a paucity of local studies observing the patterns of thyroid dysfunction in those with type 2 DM. This hospital-based case control study was designed to look for association between type 2 DM and thyroid dysfunction, in a tertiary care teaching hospital in South India, over one year. Data was obtained from 50 individuals above 18 years irrespective of gender, diagnosed to have type 2 DM according to WHO diagnostic criteria and age and sex matched adults without diabetes from bystanders of patients coming to the Hospital.

The mean age of participants was 63.95±10.82 years. There were equal proportion of females and males in both cases & control groups. TSH values was found to be significantly different (p 0.006) between cases and controls. But no such statistically significant difference was noted with respect to F.T3 (p 0.924) or F.T4 (p 0.739). There was significant difference (p<0.001) in proportion of thyroid dysfunction between cases (54%) and controls (8%). Subclinical Hypothyroidism was the commonest both cases (32%) and controls (4%). The diabetic subjects had a 13.5 times more risk for having thyroid dysfunction compared to non-diabetic. There was a statistically significant difference in the fasting and post prandial blood sugar, HbA1C (glycated haemoglobin) between the euthyroid subjects and subjects with thyroid dysfunction.

To conclude, there was 13.5 times increased risk of thyroid dysfunction in type 2 diabetic individuals compared to non-diabetics and most were subclinical hypothyroidism. Hence, it is imperative to screen diabetic individuals for thyroid dysfunction as early intervention and treatment can help to achieve good glycemic control and prevent complications.

Introduction
Diabetes mellitus and thyroid diseases are the two common endocrinopathies seen in adult population. Both conditions tend to occur together in a patient which is attributed to the interaction between the thyroid hormone and insulin [1]. Thyroid disorder and diabetes mellitus have been shown to influence each other and an association between them has been reported in literature [2,3]. The first reports showing this association was published in 1979 [1]. Since then, a number of studies in different countries have been done to estimate the prevalence of thyroid dysfunction among type 2 diabetic patients. Diabetic patients have a higher prevalence of thyroid disorders when compared to the non-diabetic population [4,5]. It has been estimated to be around 10.8% with the commonest manifestation being subclinical hypothyroidism (50%) followed by hypothyroidism (30%) hyperthyroidism (12%) and postpartum thyroiditis (11%) [6]. There has been a notable increase in the risk of developing thyroid autoimmunity in population with type 2 DM having GAD 65 (Glutamic acid decarboxylase 65) auto antibodies which have also been confirmed in the pediatric population [7,8]. Prevalence of subclinical hypothyroidism is also noted to be more in population with metabolic syndrome due to presence of associated obesity, hypertension, insulin resistance and deranged lipid concentration [9].

In 2007 Shah et al discovered that both thyroid hormone and insulin are involved in cellular metabolism and an excess or deficiency of either one of the two would result in functional derangement of the other i.e. hyperthyroidism can result in hyperglycemia or hypothyroidism results in hypoglycemia [10-12]. Thyroid hormones are known to directly control insulin secretion. The presence of thyroid dysfunction may adversely affect diabetic control. Hyperthyroidism is known to increase the rate of gastrointestinal glucose absorption, increases insulin resistance as well as degradation and in turn worsens the glycemic control of a diabetic subject, while hypothyroidism increases susceptibility to hypoglycemia thus complicating diabetes management [6]. Unidentified thyroid dysfunction could negatively impact diabetes and its complications [3].

On the other hand, DM may also affect the thyroid function to variable extent. DM interferes in thyroid function mainly at two sites; firstly at the level of hypothalamus influencing the TSH release and secondly at the peripheral conversion of T4 to T3. In diabetic individuals in euthyroid state, glycemic status influences serum T3 levels, basal TSH and TSH response to TRH (thyroid releasing hormone) [13]. Poorly controlled diabetes can induce a low serum total and free T3, increases levels of reverse T3(rT3) but may show near normal serum T4 and TSH concentrations by reducing peripheral conversion of T4 to T3. Studies have proven that diabetic control can influence plasma T3 levels; it can also impair the TSH response to TRH or the normal nocturnal TSH peak. The TSH response and ‘low T3 state’ may normalize with good glycemic control but cannot normalize the nocturnal TSH peak in patients with totally absent beta cell function [14].

The diagnosis of thyroid dysfunction in diabetic patients based solely on clinical manifestations can be difficult, as poor glycemic control can produce features similar to hyperthyroidism, such as weight loss despite increased appetite and fatigue. Severe diabetic nephropathy can be mistaken for hypothyroidism as patients with this condition may have oedema, fatigue, pallor and weight gain. Also, symptoms of hyperthyroidism/ hypothyroidism may mimic that of diabetes.

Thus it is important to evaluate diabetic population regarding thyroid diseases clinically or subclinically, as one condition can worsen the other and if left untreated causes diverse complications. Therefore, it is imperative to screen type 2 diabetic population also regarding thyroid status [15]. Screening of thyroid function is mandatory at diagnosis in patients with type1 diabetes due to association of autoimmunity.

Objectives
To study the association between Type2 DM and thyroid dysfunction.

A Hospital based case control study was conducted in the Department of General Medicine of a tertiary Care Teaching Hospital in North Kerala, South India over a one year period. Adults aged 18 years and above irrespective of gender with Type 2 DM as per WHO diagnostic criteria attending the outpatient and in-patient facility of the Hospital were included as cases and age & sex matched adults without diabetes were taken as controls from among the bystanders of patients coming to the teaching Hospital. Those not willing to participate, pregnant women, patients with chronic illness other than DM which can affect thyroid function, patients with known autoimmune disorders which can affect thyroid function, patients with urine albumin excretion >300mg in 24hr urine sample were excluded [19]. Sample size was calculated using the formula for testing the significance of difference in mean. Using the formula, n1 = [ z1-α/2 + z1-β ]² [σ1² + σ2²/r] / Δ²; Where r = n2/n1 , r =1, Δ = μ1 - μ2, μ1(mean TSH)19 = 4.58 and σ1 =2.9; μ2(mean TSH) [16] =3.08 and σ2 =1.56; z1-α/2 = 1.96 and z1-β = 0.80; sample size was calculated to be 38 cases and 38 controls. It was decided to enroll 50 cases and 50 controls in this study. Consecutive sampling was used to enroll the cases and controls, starting from the 1st of January 2017. Those age - sex matched bystanders who consented to participate and reported not having diabetes underwent screening test (FBS, 2hr PPBS and HbA1c) for diabetes. Those found to be diabetic on screening were excluded. All the 100 participants were enrolled into the study after taking their informed written consent. All the cases and controls underwent the following investigations - Thyroid profile (FT3, FT4, TSH), blood sugar levels (FBS, 2hr PPBS, HbA1C), 24hr Urine albumin. Certain socio-demographic details were also collected using pre-designed proforma.

Data Analysis
Proportion of hypothyroid, hyperthyroid and subclinical conditions were expressed as percentages and association between thyroid dysfunction and type2 DM was looked for using chi-square test. The significance in the difference in thyroid hormone levels (TSH, F.T3, F.T4) between type 2 DM and non-diabetic patients was looked for using ‘t’ test. Correlation between thyroid hormones, blood sugar levels were also looked for.

Source of Funding
The Principal Investigator bore the expenses of the extra investigations done as a part of the study.

No statistically significant difference was noted between cases and controls with respect to alcohol consumption (p 0.315); smoking (p 0.539); hypertension (p 0.0309); hypercholesterolemia (p 0.444); history of cerebrovascular accident (CVA) (p 0.790) or history of coronary artery disease (CAD) (p 0.220). Hence the cases and controls were comparable in all aspects except diabetic status (Figure 1). 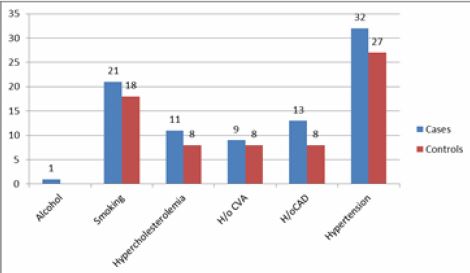 In our study a significant association was also found between diabetes and thyroid dysfunction (χ²=24.731; p <0.001). The odds ratio was found to be 13.5 (4.2-43.2), i.e. the diabetic subjects had 13.5 times more risk of having thyroid dysfunction as compared to non-diabetic individuals.

In our study 64% cases had hypertension similar to Sreelatha M et al (50%), Ghazali SM et al in Nigeria (87.5%) and Papazafiropoulou et al in Greece (85%) [29-31]. In our study, no significant association was noted between history of systemic hypertension and thyroid dysfunction similar to studies conducted by Sreelatha M et al and Chubb SA et al [29,32]. There was no statistically significant difference in proportion of hypercholesterolemia between cases (22%) and controls (16%) in our study, similar to the findings in the study by R. Anil Kumar et al [33].

Limitations
Considering the poor socioeconomic status of the population, lipid profile was not done which would have helped us to identify other factors which can influence thyroid dysfunction. Due to financial constraints, we were not able to do thyroid autoantibody assays and Anti GAD 65 antibodies in this population.

Recommendations
In view of current scenario, further researches are mandatory with regards to lipid profile and thyroid antibodies bearing in mind strong family history and high prevalence of thyroid dysfunction in this population.