Copyright © 2020 Dr. Boubakar Charra, et al. This is an open access article distributed under the Creative Commons Attribution License, which permits unrestricted use, distribution, and reproduction in any medium, provided the original work is properly cited.

Anti-N-methyl-D-aspartate encephalitis is a recently discovered disease of paraneoplastic limbic encephalitis. It largely affects young women and is often associated with an ovarian teratoma. Their severity often requires hospitalization in the intensive care unit due to consciousness and severe dysautonomic disorders. We describe the case of severe acute limbic Anti-N-methyl-D-aspartate encephalitis revealing an ovarian teratoma.

Background
Anti-N-methyl-M-aspartate (NMDAR) encephalitis is an acute autoimmune neurological disease. The disease has been classified as a paraneoplastic syndrome that mainly affects young women with an ovarian teratoma [1]. It is most common in young women of childbearing years.

Symptoms include neuropsychiatric signs, anterograde amnesia, seizures, dysautonomia and abnormal movements such as dyskinesias, often facial. The identification of anti-NMDAR antibodies is essential for the diagnosis of anti-NMDAR encephalitis because the other results of clinical examinations are not specific. Early diagnosis of the disease is important.

There are many and varied neurological paraneoplastic syndromes (PNS). They can affect all parts of the nervous system: muscles, peripheral nerves, spinal cord, brainstem, cerebellum and brain. Limbic encephalitis represents the brain pole of PNS.

Case Report
A 22-year-old woman, asthmatic on long-term treatment, with the notion of a spontaneously resolving convulsive crisis 2 weeks ago was admitted urgently for auditory and visual hallucinations complicated by afebrile consciousness disorder. A second crisis occurred on the day of his admission. His entourage reported sleep disturbances, delusions, hallucinations, restlessness evolving for two weeks. In the immediate aftermath of seizures, she remained disoriented in time and space. Neurological examination found a patient sleepy and slowed down, her Glasgow score was 13/15, reactive pupils, sharp tendon reflexes, No focal neurological deficit or Nuchal rigidity was present, blood sugar at 1.25g/L, There was no fever, The rest of the physical examination was normal apart from a painful, hard and very limited mass of the left iliac fossa without lymphadenopathy.

The evolution was marked by the occurrence of a 30-minute tonic-clonic seizure without regaining consciousness requiring ventilatory assistance under deep sedation; The cerebral CT scan with and without contrast injection and the venous angiogram were normal except for right maxillary sinusitis.

The diagnosis of meningoencephalitis was made. The initial treatment included acyclovir 10mg/kg/8H, ceftriaxone 75mg/kg/d, phenobarbital 5mg/kg/d, sodium valproate, with continuous sedation and a LMWH preventive dose. 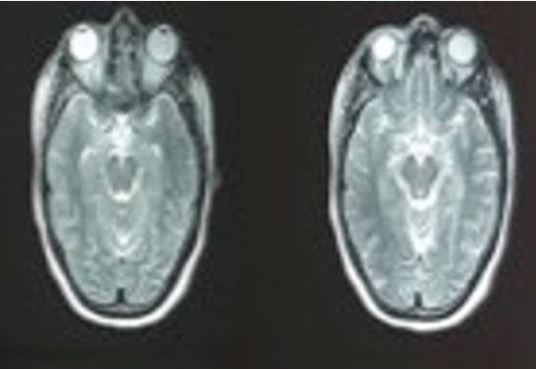 The electroencephalogram showed slow left temporal waves. 72 hours later, a second lumbar puncture was performed, showing 81 leukocytes per cubic millimeter 100% lymphocytic, protein at 0.38g/l, normal glucose at 3.70mmol/l for blood glucose at 5.4mmol/l. There was no germ on direct examination or in culture and the HSV, CMV, EBV, VZV and enterovirus PCRs were negative. Interferon was normal.

A thoracoabdominal-pelvic CT scan was performed, revealing a right ovarian multi-lobulated cystic tumor of 5cm of larger axis with a fleshy bud enhanced by the contrast product and containing calcifications evoking an ovarian dermoid cyst (Fig. 2). 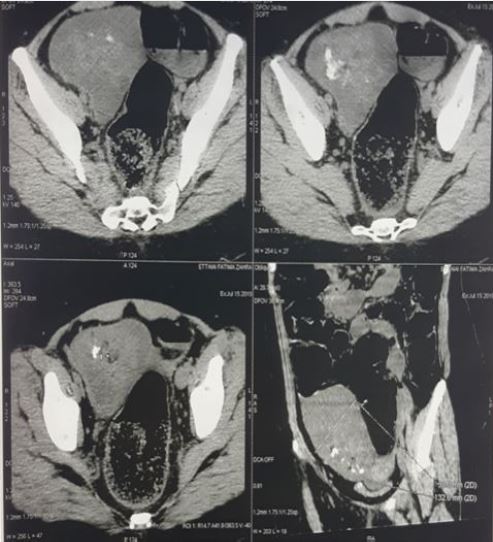 Figure 2: A coronal reconstruction of a CT scan of the patient’s abdomen and pelvis reveals a cystic left adnexal mass with an internal focus of fat and high attenuation material suggesting an ovarian teratoma

Autoimmune or limbic paraneoplastic encephalitis was then confirmed by the presence of anti-N-methyl- D-aspartate receptor autoantibodies in the patient’s serum. Corticosteroid therapy was continued to suppress the immune system response and reduce the symptoms of paraneoplastic syndrome.

Evolution was marked by a degradation of the hemodynamic state with bradycardia and progressive hypotension, refractory to the filling and to the vasoactive amines, a bilateral reactive mydriasis was installed. 12H after, she presented a cardiac arrest. We performed cardiopulmonary resuscitation with external cardiac massage, administration of adrenaline and bicarbonates, without success.

Discussion
Anti-NMDAR encephalitis is a serious but reversible autoimmune disease, first described in 2007 by Dalmau et al. from the University of Pennsylvania [2]. The exact etiology and pathogenesis of anti-NMDAR encephalitis is not yet clear. The latest study shows that the incidence of anti-NMDA encephalitis may involve antibodies against the NMDA receptor subunit GluN1 which has depleted the NMDA receptor clusters of neurons, causing dysfunction of the signal transduction transmitted by the glutamate.

Most cases of anti-NMDAR encephalitis have been described in younger women with ovarian teratomas. This was the case with our patient whose imagery find an ovarian teratoma.

The serie of 100 cases published by Dalmau et al., In 2008, [3] and the serie of 44 cases by Irani et al. in 2010 [4] described two different phases during an encephalitis with anti-NMDAR antibodies: a prodromal phase with a neuropsychiatric signs of subacute or acute installation marked by memory, behavioral, psychotic disorders or by temporal seizures or generalized. Headache, nonspecific viral syndrome, or low fever are common in the two weeks before admission. From the initial presentation depends the patient’s orientation towards psychiatric, neurological or infectious emergencies, because of a possibly febrile encephalitic syndrome. Hyperthermia is possible due to vegetative disorders. Restlessness, an expression of sometimes major anxiety attacks is also frequent. Some patients develop drastic involuntary movements and spastic rigidity [5]. Most often evolving towards tonic-clonic seizures [5]. And often after 10 to 20 days, clinical worsening occurs, including disturbances in alertness, abnormal movements and dysautonomic phenomena justifying treatment in intensive care.

Close monitoring in intensive care is frequently justified by disorders of consciousness, sometimes by the sedation that requires the uncontrollable agitation, but especially by ventilatory disorders (central hypoventilation) or dysautonomia with disturbances of the heart rhythm (tachy- or bradycardia), thermal dysregulation. Hypersialorrhea is common. Cases of shock or even asystole have been described, justifying hemodynamic monitoring at this stage.

Pathophysiologically, the most probable hypothesis involves mechanisms of molecular mimicry: the presence of nervous tissue within the tumor would provoke an immune reaction of the patient and the production in large quantity of onconeural antibodies. The conformational proximity of tumor and neuronal antigens would lead to the binding of these antibodies to the membrane NMDA receptors in the central nervous system of patients, resulting in neurological symptoms by a dysfunction of the neurotransmission. Their reversibility is due to the functional nature of the dysfunction induced against a membrane antigen by a humoral immune mechanism, unlike the organic character of lesions of limbic encephalitis due to onconeural “classical”, intracellular antibodies, by a mechanism involving immunity cell [6].

The recognition of a limbic encephalitis leads to a therapeutic attitude consisting in a surgical removal of the tumor, associated with an immuno-modulation (corticosteroids and / or polyvalent immunoglobulins and / or plasma exchanges) [2]. The removal of the tumor, when it exists, is associated with a better evolution under subsequent immunotherapy. No intervention studies have been conducted to determine the best therapeutic drug strategy. The published data make it possible to retain a logical sequence adopted by all the authors comprising the administration of high doses of methylprednisolone, (1g/d for five to ten days) followed by oral corticosteroids if effective, in the otherwise, treatment with plasma exchanges or polyvalent immunoglobulins [7], or even biotherapy with rituximab anti-CD20 [8] or cyclophosphamide [9], in the absence of improvement or in the case of recurrent form.

Conclusion
Limbic paraneoplastic encephalitis is a rare but increasingly recognized entity, including NMDA glutamate receptor antibodies, which should be known and discussed for any acute encephalitis that does not demonstrate an infectious cause.

Severe forms are not uncommon and require hospitalization in intensive care. Thinking about it in case of memory and behavioral disorders, acute or subacute, possibly associated with dysautonomia and abnormal movements, must lead to the search for a teratoma (ovarian or mediastinal) and anti-NMDA-R serum antibodies. Neurologists, but also psychiatrists and intensivists must know how to evoke this diagnosis which leads to effective treatment.