Copyright © 2019 Dr. Tatjana Perović, et al. This is an open access article distributed under the Creative Commons Attribution License, which permits unrestricted use, distribution, and reproduction in any medium, provided the original work is properly cited.

The aim of this study was to establish the influence of sagittal dentoskeletal pattern on the value of angular profile parameters of the chin region, as well as to examine the significance of the established variations for each angle individually. This study included the examination and the analysis of cephalometric radiography derived lateral cephalograms to evaluate profile angles for 120 adult Caucasian subjects (60 male and 60 female) from the central Balkan region, aged between 18-30 years. The mentolabial angle, mentocervical angle (MCA) and cervicomental angle (CMA) are examined in subjects with different dentoskeletal pattern: Class I, Class II division 1, Class II division 2, and Class III. In our sample of subjects with Class I, the average value of mentolabial angle is 131.13 ± 14.17º. For that angle, there is significant differences established between subjects with Class I and Classes II division 1(P<0.001) and 2 (P=0.048) and Class III (P=0.001). No significant differences in the values of MCA I CMA angles were found between the different dentoskeletal patterns. Dentoskeletal pattern greatly influences the value of mentolabial angle only.

Introduction
Since the ancient anthropological dispute at the beginning of the last century, between T. T. Waterman and Louis Robinson on the origin of a chin in human beings, the chin is still an interesting part of the face, both for anthropologists and experts in the field of plastic surgery and orthodontists, and for laypeople and analysts of facial aesthetics. While Louis Robinson believes that the chin developed as a result of man's speech due to the use of m. genioglossus, Waterman considers the chin as a consequence of jaw bone remodeling due to changes in eating habits and, consequently, the reduction in the number of teeth and their bone support [1].

The chin, due to its prominence on the profile, greatly influences the overall harmony and aesthetic impression of the entire face. The face represents our identity as an individual and can be viewed both from the aspect of aesthetics and the aspect of harmony. Aesthetic standards are strictly subjective and vary in different cultures and regions. The influence of ethnic differences in aesthetic assessment has been reported by many authors. Some authors emphasize culturally specific standards of beauty thus considering the lowest deviation from normal cultural standards to be a paragon of facial beauty. The same applies to the chin [2,3]. In some cultures, a dominant chin represents a synonym of vigor and individuality and is not considered to be an aesthetic defect. Moreover, males with decreased anterior chin projection are considered less attractive [4]. On the other hand, in Asian population a small and retrognathic chin is tolerated, especially in females [5,6]. Unlike aesthetics, harmony is precisely defined by angular and linear measurements. It has been studied for centuries, by ancient Greek philosophers and Egyptian sculptors with their complex facial harmony, and by Renaissance artists, such as Michelangelo and Leonardo da Vinci. They looked for specific measurements related to facial proportions whereas various methods for assessing facial features were applied, such as: anthropometry, photogrammetry, and roentgenocephalometry [7-9].

Class I developmental skeletal pattern is usually related to the straight profile and pleasant face due to its eugnathic anteroposterior jaw relationship and normal chin position relative to other facial contours. Class II division 1 pattern indicates a convex profile with the chin set posterior, thereby declaring the nose is dominant due to retrognathic position of the lower jaw. Class II division 2 skeletal pattern indicates a convex profile with characteristically emphasized tip of the nose and chin, having the tendency of mutual convergency. This specific facial profile morphotype exists due to retropositioned dentoalveolar segment. Class III pattern indicates an anteroposterior, overdeveloped lower jaw with the chin dominanting over other facial features (nose, forehead, lips) considered to be the least aesthetic. Mentioned dentoskeletal patterns are common to all races (ethnicity) [16].

The aim of this study was to establish the values of soft tissue profile angles of the chin region in subjects with Class I, Class II division 1, Class II division 2, and Class III pattern, in order to, examine, in this way, the influence of pattern on the value of angular profile parameters of the chin region, as well as to examine the significance of the established variations for each angle individually.

Materials and Methods
The study was conducted at the Dental Clinic in Niš. Before the commencement of the study, each volunteer gave an informed consent as to the purpose and nature of the study. All work was performed in accordance with the Declaration of Helsinki and was approved by the Faculty Ethics Committee, (General project title of Clinical and Experimental Examination of the Stomatognathic System and Modern Therapeutic Procedures, Project Number 11, of March 8, 2017, Nis, Republic of Serbia).

This study included the examination and the analysis of lateral cephalograms to evaluate profile chin angles for 120 adult Caucasian subjects (60 male and 60 female) from the central Balkan region (Serbia), which were taken from the patient archives. Lateral cephalograms were recorded during routine diagnostic procedures for patients who were examined at the Department of Jaw Orthopedics at the Clinic of Dentistry in Niš, aged between 18-30 years, and who underwent orthodontic therapy for the first time. Subjects who had a history of trauma, craniofacial anomalies, cleft lip and palate, and previous orthodontic, prosthetic or orthognathic surgical treatment, were excluded from the study. Cephalometric radiographs were done using a cephalostat (head-holding device). All patients included in the study underwent a detailed clinical assessment and analyses of their dental and skeletal profiles, as well as soft tissue profiles on cephalometric radiography. The equipment used for the imaging analyses was the Rotograf Plus (20090 Buccinasco MI Italy) (Number and series: 00036045), and the CEI-OPX/105X-ray tube (CEI, Bologna), which had a protective filter (2.5mm aluminum - equivalent). Lateral cephalometric films were taken from a distance of 165cm from the tube, using a cephalostat to ensure rigid head fixation. The patients were placed in the cephalostat in such a way that the sagittal plane of the head was at a 90° angle to the path of the X-rays. The Frankfort horizontal plane (from the lower edge of foramen orbitale and upper rim of the external auditory canal) was parallel to the ground, the teeth were in central occlusion position, and the lips were in relaxed position. No correction for magnification factors was required, since all the radiographs were taken with the same equipment and the same proportions. Each cephalogram was fixed on the viewing box with the profile to the right, and the acetate tracing paper was fixed by tape at the top. The soft tissue and skeletal features were traced manually in a darkened room, using a 0.5mm lead pencil. All the image tracing was done by the main investigator. Subjects were divided into four groups. The criteria for categorizing into four groups in the study was the size of the ANB angle according to Steiner and the angle inclination of the upper incisors. The cephalometric ANB angle was the parameter that defined the dentosagittal pattern between the upper and lower jaw as eugnathic, distal, or mesial (Fig. 1). The points that determined the ANB angle included, point (N), the nasion, located on the suture between the frontal and nasal bones; point A, the deepest point on the line between the anterior nasal spine and the prosthion (alveolar point); and point B, the deepest point from the line between the infradentale and the pogonion (midline of the chin). 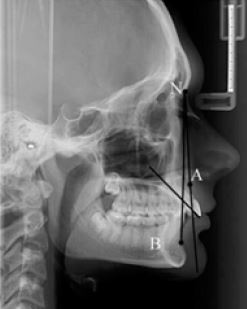 Figure 1: The cephalometric ANB angle and the angle of inclination of upper incisors

Then, on the radiograph of each patient, the following anthropometric soft tissue points were determined (Table 1, Fig. 2).

Table 1: Facial landmarks (with abbreviations) used for the determination of angular parameters. 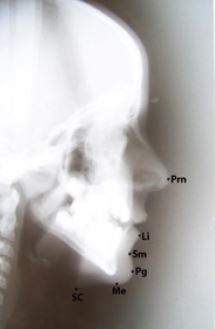 By pulling lines from these points, the following profile angles have been formed (Fig. 3): 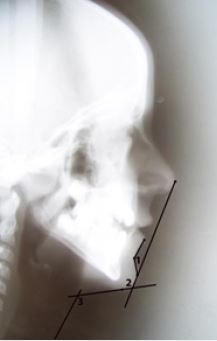 2. Mentocervical angle (MCA) is defined by a line from the pronasale (Prn) or nasal tip to the soft tissue pogonion (Pg) intersecting with the submental tangent (Me toSC);

Statistical analysis of obtained morphometric data was performed by IBM SPSS Statistics (version 25). Results of the Kolmogorov-Smirnov test showed that majority of the morphometric parameters were not normally distributed. Consequently, significance of detected differences were evaluated by non-parametric Mann-Whitney U test.

Results
Descriptive statistics of average angular measurements for different parameters in all four groups with different jaw relationships (Class I, Class II / 1, Class II / 2, Class III) are shown in Table 2. In the Table 3, statistical differences of average values of the examined angles between the group with Class I and the other three groups are shown.

Table 3: Statistical differences between Class I and other groups (Z value; P=probability value).

Discussion
The position and appearance of the chin characterizes each person, therefore the retrusive or protrusive chin with a characteristic mentolabial sulcus may, to a large extent, affect the appearance of the profile. Therefore, it is important to consider a balance between the lips and the chin, since the harmony of the person's profile depends on this relationship [15,17]. In our sample of subjects with Class I, the average value of the mentolabial angle is 131.13±14.17º (Table 2). Highly significant differences have been established by comparing this value with the average values in subjects from other groups thus indicating the great influence of the dentoskeletal pattern on the value of mentolabial sulcus angle. In subjects with Class II/1 and Class II/2, the values of this angle are lower, while in the group of subjects with Class III they are higher than values for eugnathic subjects (Table 3). This result was expected, considering the dentoskeletal complex in Class II/1 on the profile of the lower jaw segment: an increased thickness of the lower lip, the lower lip sulcus and the soft tissue of the chin, all serving to camouflage the posterior position of the chin [18,19]. The lower lip attempts to overcome the increased incisal step and therefore to reduce the value of this angle. With Class II/2, the emphasized protuberantia mentalis influences the reduction of mentolabial sulcus angle. Unlike the above, in Class III, there are thin soft tissues of the lower jaw segment with a less emphasized protuberantia mentalis thus affecting the opening of this angle. With the mentolabial angle more open, the lower jaw position in the subject with Class III malocclusions is more anterior [20]. Lapter-Varga et al. [21] published the results with the mentolabial angle also showing great variability. In their sample, the mentolabial angle was 130.36±12.58°. According to Anić- Milosević et al. [22], the mean value is 134.5±9.08º for females and 129.2±9.55º for males. Reis et al. [11] have not established significant differences in the values of this angle in different dentoskeletal patterns and they believe its size does not affect the profile aesthetics as long as the lips are competent. Fortes et al. [23] have (by comparing this angle in white Brazilian subjects with pleasant and unpleasant facial profiles) established the following average values: 137.10±8.79º for pleasant facial profiles and 140.40±10.31º for unpleasant facial profiles. The difference is not statistically significant. Curiously enough in the past, the face (both male and female) with deeper and more prominent mentolabial sulcus (about 122º) was regarded as an ideal beauty [17,23].

Conclusion
By examining the influence of the sagittal dentoskeletal pattern on the value of chin angles (the angle of mentolabial sulcus, mentocervical and cervicomental angle), in 120 subjects of both genders and with different facial patterns, significant differences were established between subjects with Class I and Classes II division 1 and 2 and Class III only for the mentolabial sulcus angle , while the differences established between the different groups in mentocervical and cervical angles were not statistically significant.