Copyright © 2019 Dr. Nyer Firdoose Chintamani Subhan. This is an open access article distributed under the Creative Commons Attribution License, which permits unrestricted use, distribution, and reproduction in any medium, provided the original work is properly cited.

The following manuscript attempts to unravel the anatomic variations which are ascertained via imaging and clinical co-relational findings exhibiting the intricate presence of complex network of neurovascular plexus / nutrient canal plexus presumably pointing out to the ascribing factors which could have led to repeated failure of dental anaesthesia and extended bleeding during dental extractions in the past as documented in the patient’s dental history. The cognizance of such distinctive anatomic intricacies is of immense clinical importance to the oral maxillofacial surgeons before proceeding with any interventional surgeries in the head and neck region.

Anatomic science of human body has its own language, and the structure of which can be unravelled only by a veracious search of literature and excerpts from intricacies of the imaging and clinical co-relational findings. A fine network of neurovascular bundles and nutrient canals in the area lateral to the roots of the mandibular molar teeth are notably seen to be extending up into the ramus [1]. The components of the inferior alveolar neurovascular bundle (NVB), which is a major supplier of sensation and blood to the mandible via the mandibular canal, are arranged sequentially from superior to inferior as follows: vein, artery, and nerve [2].

Structural variations in the dental anatomy have been described to be diverse in many studies over past two centuries. The first mention of multiple canals was by Serres (1817) [3] which were confirmed by Robinson (1906) [4]. These variations develop at the later stages of third embryonic month persisting through adulthood. The mesenchyme of the mandible gives rise to a basal vein at the level below the inferior dental nerve and artery [5,6]. This leads to subsequent development of bony channels between the neurovascular structures causing separation from the main mandibular neurovascular bundle.

In the following manuscript, the author attempts to explore the mysterious anatomic variation of a complex intriguing CBCT investigation of a neurovascular plexus / nutrient canal plexus, hence making this manuscript of immense clinical significance for clinicians operating in the oral maxillofacial region along with emphasizing on adaptation of modified or certain specified local anaesthetic techniques in such patients.

Case Presentation
This case study describes a 64-year-old Saudi male, moderately-built, asymptomatic patient who was referred to the author in the department of oral and maxillofacial surgery at a tertiary referral centre for dentistry for extraction of periodontally compromised teeth with moderate to severe bone loss and teeth mobility as part of a comprehensive oral rehabilitation plan.

Patient’s medical history was non-significant. Extra orally there was no obvious asymmetry of the face. On intra oral examination, there were multiple missing teeth in the mandibular arch with only remaining 41, 42, 45, 34, 35 & 36 teeth. The maxillary arch had a complete dentition except for the bilateral third molars which the patient gave history of being extracted over three decades back. Exodontia of the all the molars in maxillary and mandibular arches was planned due to the mobility caused as a result of severe bone loss secondary to periodontal disease. The patient’s previous dental history involved multiple dental visits and also the repeated failure of dental anaesthesia. This intriguing past dental history kindled the author to instigate a comprehensive clinical examination followed by a detailed clinical interview so as to implement a systematic approach in providing the patient an efficient and a beneficial treatment plan catering to complete oral rehabilitation.

An unusual scalloping and striations of the bone pattern in the left ramus of the mandible (Fig. 1) which did not co-relate with the normal morphologic features of the mandible were revealed. This instigated the need for further evaluation of mandible and the coronoid processes. 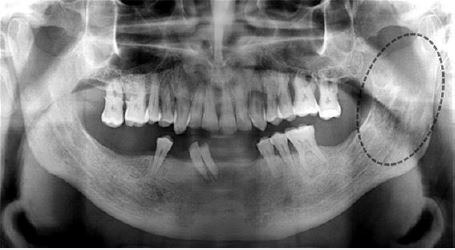 Figure 1: Panoramic radiograph revealed unusual radio-opaque scalloping on the left ramus region with multiple parallel striations to inferior dental canal (black circle) which was absent on the right side

Analysis of the 3D reconstruction of this scan confirmed the structural alterations such as presence of accessory foramina with bony irregularities / striations (possible canals) on the lateral and medial aspect of the ramus of the mandible. There was the presence of a foramen in the anterior aspect of the ascending border of the ramus just below the coronoid process resembling a retromolar foramen but its location being higher than that of the actual retromolar foramen, an accessory foramen on the lateral aspect of the ramus (Fig. 2). Both distinctive radiographic findings were hinting at the fact that they are not consistent with the normal morphology of the mandible.

The axial section of the scan images unveiled the presence of a foramen on the anterior border of the ramus along with a canal in confluence, small accessory foramina exiting lateral and medial to the ramus (Fig.4). The sagittal section of the scan images ascertained the presence of the variations in the ramus of the mandible with the presence of retromolar foramen and its canal, multiple accessory foramina and canals running parallel to and few branching out from the main mandibular canal. The accessory canals appear to end abruptly at the level of the body of mandible just anterior to the second molar region (Fig. 5). The variations are suggestive of presence of complex network of neurovascular plexus presumably pointing to the ascribing factors, which could have led to repeated failure of dental anaesthesia and extended bleeding during dental extractions in the past as documented in the patient’s dental history. 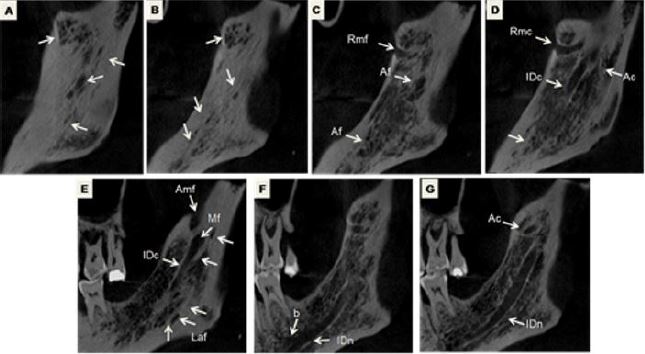 The inferior alveolar nerve trunk has exhibited a branching structure suggestive of the upper limb brachial plexus. This plexus-like structure was the fragile network of the inferior alveolar artery. There were numerous communications between the individual components, including fine filaments to the auriculotemporal nerve both proximal and distal to its origin [10]. A second “plexus” was located between the mandibular canal and the roots of the mandibular teeth and was composed of small fine filaments which arose from the intramandibular plexus. These fine plexus network appeared to enter the roots of the teeth on their lateral surfaces as well as at the apices. The neurovascular plexus lies within a discrete canal running up to the mental foramen and seems to disappear distal to this point [10].

The pattern of distribution of the inferior alveolar nerve was classified into three types [1]. In Type 1, this arrangement the inferior alveolar nerve was a single large structure lying in a bony canal. The branches of supply to the canine and incisors were always found in a deeper (inner or posterior) position and were offshoots from a large branch of the main nerve given off just before it entered the mental foramen. The incisor plexus, while connected to the branches mentioned, was not the source of the dental branches. They clearly displayed thick down turning branches, from both the dental branches and from the incisor plexus, leading to foramina on the inner surface of the mandible opposite the premolar teeth. These foramina were described by Shiller & Wiswell (1954) [11] and provide a route for communication between branches of the mylohyoid nerve and the incisor plexus or the dental branches of the inferior alveolar nerve. Additional prolongations of the plexus can be traced to foramina, also described by Shiller & Wiswell (1954) [11], near the midline on the posterior aspect of the symphysis, either above- or below the genial tubercles. The undivided nerve was situated a little more inferiorly, and its branches to the teeth were arranged in a plexus between the nerve and the roots, instead of being direct offshoots to the roots, it seemed like the plexus gave off branches to the periodontal and gingival structures.

In Type 2, the nerve was situated substantially lower down in the mandible, some distance from the roots of the molars. The dental branches were given off more posteriorly and were consequently longer and more oblique in position that in type 1. The further course of the nerve was as described in type 1. While Type 3, the inferior alveolar nerve gave off two large branches posteriorly, which together could be regarded as equivalent to an alveolar branch, while the main continuation of the nerve occupied a more inferior position and continued, as in the other types, towards the mental foramen and the supply of the canine and incisor teeth.

These accessory communications could provide auxiliary innervations to the mandibular teeth and associated soft tissues and may be implicated in insufficient dental anaesthesia owing to the potential for collateral transmission of nervous impulses [12]. The mandibular nerve branches are known to exhibit high variations within the infratemporal fosse, as they travel to enter the mandible. In the infratemporal fossa the inferior alveolar nerve seems to originate from the posterior division of the mandibular nerve as 2 distinct branches or roots [13]. Hence for profound dental anaesthesia in this region should be alternated with a modified or specified different approach than the conventional Haldstead [14] method of inferior alveolar nerve block.

Conclusion
The following case presentation represents a compound entity by unravelling the anatomic variations of presence of intricately complex network of neurovascular plexus component. Galen describes plexus as - “It is not a simple network but [looks] as if you had taken fisherman’s nets and superimposed them. It is characteristic of this net of nature’s, however, that the meshes of one layer are always attached to those of another, and it is impossible to remove anyone of them alone; for, one after another, the rest follow the one you are removing, because they are all attached to one another successively” in his book ‘On the Usefulness of the Parts of the Body' [15]. As it is almost always better to be safer than sorry indicating that every oral maxillofacial surgeon should have the ability to fore see a cognizance of a possibility of existence of such an intricately distinctive anatomic variant before heading with any interventional surgeries in the head and neck region and adapt to modified or specific local anesthetic techniques for successful accomplishment of treatment protocol.

Acknowledgement
The author thanks the patient for his kind co-operation in the investigations and the consent rendered to illustrate the findings in the manuscript.

Compliance with Ethical Standards
All the findings were incidental and not planned procedural study. The patient was informed about the peculiar findings in him and an informed signed consent was taken with permission to use his data for research publication purposes.

Funding & Conflict of Interest
There was no funding for this study and the author declares that there is no conflict of interest.