Copyright © 2019 Dr. Gaia Pellegrini, et al. This is an open access article distributed under the Creative Commons Attribution License, which permits unrestricted use, distribution, and reproduction in any medium, provided the original work is properly cited.

Spermidine is an endogenous polyamine whose increase induces the autocrine remodeling into targeted cells. The aim of the present study was to evaluate the adjunctive beneficial effects of the local delivery of spermidine to periodontal non-surgical therapy on reduction of periodontal pocket.

Introduction
Periodontitis is a wide range of bacterially induced inflammatory diseases that cause the destruction of tooth supporting tissues (gingiva, periodontal ligament and bone) and the formation of periodontal pocket [1]. Extension and severity of periodontal tissue damage depends on different factors, such as the quality and quantity of bacteria, the host response and, for example, smoking or some systemic conditions [2]. The ratio between pro (bacteria, systemic diseases, risk factors..) and anti inflammatory (immune system) mechanisms will determine the story of the disease, that is usually slow and progressive [2].

The treatment of periodontal disease consists in cause related therapy, the aim of which is to remove all local etiological factors and irritants such as plaque and calculus by powered or manual instruments, to obtain adequate compliance by the patient in the maintenance of a satisfying level of oral hygiene and to modify any modifiable negative habit. In most cases, such approach is effective at arresting the progression of the disease, bringing the periodontal tissue back to healthy conditions and eliminating periodontal pockets. However, cases in which infection is particularly aggressive and/or pockets defects are particularly deep or difficult to cleanse, further local or systemic therapeutic strategies are needed to reduce the bacteria load or to support the immune system [3]. Subsequently, any remaining periodontal pockets may be eliminated by a surgical approach that may contemplate the use of regenerative substances or biomaterials [4,5]. A large variety of drugs or substances that inhibit or eliminate periodontopathogenic microorganisms as well as modulate the inflammatory response of tissues has been proposed with the aim to make the cause-related therapy more effective, however so far only limited beneficial effects have been proved [3].

Polyamines, namely putrescine, spermidine and spermine, are low molecular weight cationic molecules synthesized by many types of cells, especially those in tissues with high turnover, and also introduced with the common diet. Spermidine acts as conformation modifier on most biologically active, anionic biopolymers [6,7]. Such electrostatic, non-pharmacologic mode of action seems to end-up with the promotion of physiologic events including autophagy induction, immunomodulation, extracellular matrix turnover, cardioprotection, neuroprotection and stem cells activation [6,8]. Spermidine also has demonstrated in vitro to suppress the synthesis of pro-inflammatory cytokines [9-11] and to downregulate chemotaxis of polimorphonuclear leucocytes when administrated at concentrations similar to those found in gingival crevicular fluid [12]. Higher concentration of spermidine has also been found in tissues during inflammatory disease, suggesting a modulating activity mediated by the electrostatic interaction with the anionic mediators of the inflammatory patterns. The tissue content of spermidine was found to decrease with age and its higher levels in blood of nona/centenarians seemingly indicating a protective activity on tissue aging, thus improving human longevity [13].

Due to its role as endogenous regulator, the delivery of spermidine on periodontal pockets may be proposed to improve/accelerate the periodontal tissue response and healing after non-surgical therapy of periodontitis. However the effect of this polyamine on periodontal status has not been assessed yet.

The aim of the present study was to assess if the local delivery of spermidine brings adjunctive beneficial effects to periodontal non-surgical therapy in terms of reduction of periodontal pocket.

This is a split mouth, blind, randomized controlled clinical trial. The study was approved by the ethical committee of Università degli Studi di Milano (n. 655, 3rd May 2016). All clinical procedures were performed in accordance with the ethical standards of the institutional and/or national research committee and with the 1964 Helsinki declaration and its later amendments or comparable ethical standards for studies involving human participants.

20 patients with periodontal disease of Stage 3 Grade B scheduled for cause related non-surgical periodontal treatment were enrolled.

They all agreed to sign a written informed consent to take part to the study.

The following exclusion criteria were applied: current smokers or former smokers who had smoked in the previous 6 months; patients with clinically significant or unstable organic diseases, immune compromised subjects, subjects taking steroid medications or chronically treated (i.e., two weeks or more) with any medication known to affect periodontal status (i.e., antibiotics or NSAIDS), patients who took antibiotics within 90 days of baseline; patients displaying a compromised healing potential such as those affected by connective tissue disorders or bone metabolic diseases; patients with conditions requiring antibiotic prophylaxis; pregnant or lactating women, or women who were of childbearing potential and not using birth control or abstinence.

In each patient, three pockets with ≥ 6mm were assigned by a balanced random permuted block randomization approach to one of the following treatments: a) SRP + spermidine gel, b) SRP + placebo gel, c) SRP. In order to reduce the chance of unfavorable splits between treatment groups in terms of key prognostic factors, randomization process of the treatment assignment (a, b and c) of 3 experimental sites for each patient was done by the central registrar (DC) and took into account the mean PPD at baseline (PPD of 7mm). The treatment assignment was communicated to the operator (MT) immediately after scaling and root planning of all teeth.

At baseline, a full periodontal charting was completed for each enrolled patient. Intraoral radiographs of the experimental quadrants were also taken using A Rinn’s RING and a long cone parallel technique. In three quadrants for each patients, three experimental teeth with PPD ≥ 6mm were selected and assigned to one of the following treatments: scaling and root planning (SRP)+ spermidine gel (spermidine + alginate) (group a), SRP+ placebo gel (only alginate) (positive control, group b) or SRP (negative control, group c). After inclusion into the study, each patient was thereafter scheduled the next appointments for non-surgical periodontal treatments (T0), charting at 3 (T1) and 6 (T2) months of follow up. Briefly, all pockets were cleaned under local anesthesia by means of ultrasonic scalers and hand instrumentation (Gracey standard and mini five curettes), and the roots were planned. Non-surgical treatment was performed by the same operator (MT) following a quadrant by quadrant approach at Dental Building at San Paolo Hospital (Milan). Further mechanical instrumentation was not performed during the following 3 months.

Figure 1: Local delivery of spermidine gel into the periodontal pocket.

The following clinical measurements were taken at baseline, 3 (T1) and 6 (T2) months after SRP (T0) by a further blind operator (LC): FMPS and FMBS at four sites for all teeth; probing pocket depth (PPD) assessed at six sites of each tooth treated. All measurements were taken with a UNC periodontal probe (Hu Friedy Manufacturing Company Inc., Chicago, IL, USA).

The primary outcome of the study was PPD reduction. Sample size calculation was performed using α = 0.05 (5%) and the power of sample 80%. For the variability the value of 0.8mm (ng/mL) (standard deviation of PPD) obtained in previous papers was considered [14]. The minimum significant value considered was 1mm [14]. On the basis of these data, the needed number of patients to be enrolled resulted 17. Three more patients were enrolled considering a drop out of 15%.

A total of 20 patients (9 males and 11 females, mean age 54 years) non smokers and systemically healthy were enrolled in the present study. Patients were enrolled from July 2016 until March 2017 and follow-ups at 6 months were completed by September 2017.

Table 1: Data on periodontal pocket depth at each time point for groups. Significance of differences between time points (paired t test) and groups (Friedman test) has been indicated 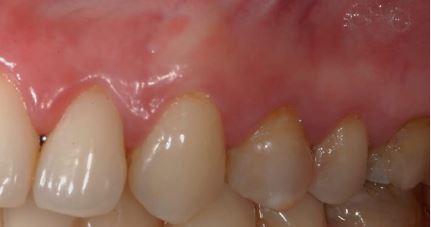 Figure 2a: Pictures before treatment with placebo 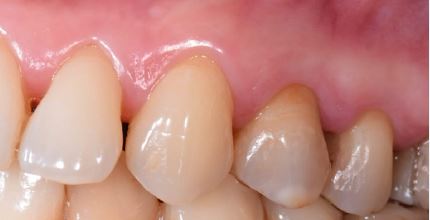 Figure 2b: Pictures after treatment with placebo. Gingival tissue appears pink without edema.

Figure 3a: Pictures before treatment with spermidine. The gingival inflammation due to plaque and calculus is evident

Figure 3b: Pictures after treatment with spermidine. The gingiva appears healed. The opening of the interdental spaces may indicate the resolution of the edema.

Discussion
In the present study the beneficial effects of spermidine locally delivered into periodontal pockets as adjunctive treatment to non-surgical therapy of periodontal disease were investigated. A split mouth randomized controlled study was drawn in order to eliminate interindividual differences concerning the response to the treatment at patient and operator level. From the analysis of data collected 3 months after treatment, it resulted that all the treatment options determined a significant improvement of clinical outcomes without differences between groups. However at the analysis of the reduction trend, only sites treated with spermidine demonstrated a prolonged (6 months) improvement of periodontal pocket depth compared to placebo and traditional non-surgical mechanical treatment. As reported above, polyamines and spermidine in particular, proven to play a non-pharmacologic, electrostatic micro-modification of some key protein involved in immune regulation [15]. Through this primary mode of action, spermidine exerts the synthesis inhibition of pro-inflammatory mediators including nitric oxide, prostaglandin E2 and cytokines such as tumor necrosis factor α and interleukin 1β [16]. In a rodent model of Parkinson disease it showed antioxidant and anti-inflammatory properties [17]. Spermidine was also reported to favor the formation of CD8+ memory T cells via induction of autophagy [18]. CD8+ memory T cells were found to play a protective role on bone tissue, by promoting the secretion of anti-inflammatory cytokines (IL 10), the suppression of osteoclastogenesis, thus promoting bone regeneration [19]. Furthermore, CD8 T cells synthesize amphiregulin, a cytokine member of the epidermal growth factor family with anti-inflammatory properties [20]. This protein plays a crucial role in orchestrating the repair tissue activity of lungs, muscles and skin [21]. In periodontal tissue, inflammatory and reparative processes that follow non-surgical treatment may involve the activation of the immune system and induce the secretion of amphiregulin. Indeed, an in vitro study observed that epithelial cells rests of Malassez express amphiregulin [22]. In adults, such cells appear to play a role in maintaining the normal periodontal cellular elements and function and also seem an important source of stem cells that might play a pivotal role in periodontal regeneration [23]. In consideration of what is reported in literature, it could be supposed that the prolonged improvement of reduction of PPD that was found at 6 months in sites treated with spermidine leaded to a sustained tissue repair activity over time. To confirm this hypothesis, further studies assessing the immune response of periodontal tissue to spermidine should be designed. In the treatment of periodontal disease, the strategy of local delivery has been proposed with the aim to expose the infected/inflamed gingival tissue to high doses, under controlled release, of medications limiting the systemic involvement. Several drugs have been released in such way as an adjunct to scaling and root planning with the aim to reduce the pathogenetic biofilm, improve bone formation or contrast its resorption and reduce tissue inflammation. Bone stimulatory and anti inflammatory agents such as boric acid gel, simvastatin, rosuvastatin and atorvastatin have been clinically tested with encouraging results on the improvement of clinical parameters including pocket depth reduction and percentage of bone fill up to 6 months after delivery [24-26]. A recently published review observed that local antibiotics/antimicrobials can offer clinical improvements, in particular in persistent or recurrent localized deep sites, mostly when using vehicles with proven sustained release of the antimicrobial agent [27]. Local delivery of gels containing bisphosphonates were also investigated and resulted in a significant increase in PPD reduction and percentage of bone fill [14,28]. In the present study, non-surgical treatment was done following a quadrant-by-quadrant approach to limit contamination of control sites with spermidine during the initial healing phase. However this study design limited the blinding of the operator who performed the therapy [29].