Patophysiology and Epidemiology
of SPH

Clinical Findings and Diagnosis
of SPH

Copyright © 2019 Dr. Cuneyt Tetikkurt. This is an open access article distributed under the Creative Commons Attribution License, which permits unrestricted use, distribution, and reproduction in any medium, provided the original work is properly cited.

Introduction
The natural history of sarcoidosis is extremely variable from spontaneous remission to pulmonary fibrosis with ongoing remissions and exacerbations. In approximately 5% of the patients, perpetual pulmonary fibrosis occurs. As in all forms of advanced parenchymal lung disease, the prevalence and impact of pulmonary hypertension tend to be greater in the later stages of sarcoidosis. However, sarcoidosis associated pulmonary hypertension (SPH) may arise in the early stages of disease. Patients with chronic fibrotic pulmonary sarcoidosis have an increased mortality risk while pulmonary hypertension may arise as a major cause of death in patients with advanced disease [1,2]. SPH is known as a complication of advanced disease for years and has been widely investigated in the past ten years due to its major impact on the prognostic outcome of sarcoidosis patients [3,4]. Pathogenesis of SPH is complex and associated with multiple factors. Pulmonary hypertension associated with other fibrotic lung diseases may be mild as opposed to many cases of SPH. The exact incidence of SPH is unknown. The wide availability and common use of echocardiography has led to an increased diagnostic yield of this complication. In this review, pathogenesis, risk factors, clinical findings and diagnosis of SPH are discussed with the current treatment options.

Patophysiology and Epidemiology of SPH

Extrinsic mechanical compression of pulmonary arteries due to enlarged lymph nodes may lead to pulmonary hypertension which is the pathologic mechanism in approximately one fifth of the patients with stage IV disease [2,12]. Pulmonary arteritis that may be responsive to antiinflammatory treatment is another responsible factor pulmonary hypertension of sarcoidosis. Venoocclusive disease may also lead to pulmonary hypertension in sarcoidosis which may be more common than clinically detected [11,12]. Hypoxia associated pulmonary vasoconstriction, left ventricular systolic or diastolic failure and cytokine derangement may play a role in SPH [13,14]. Endothelin-1 produced mainly by endothelial cells and induced by hypoxia, shear stress and various growth factors acts directly on smooth muscle cells leading to vasoconstriction. This mediator may also play a role for vascular remodelling in sarcoidosis [15]. The above mentioned mechanisms lead to hypertension alone or in combination. Causes of pulmonay hypertension in sarcoidosis are depicted in Table 1 [2,5,6]. Identification of the liable mechanism may culminate in better treatment results.

Clinical Findings and Diagnosis of SPH
Diagnosis of pulmonary hypertension in sarcoidosis patients is often late in the course of the disease because it is perplexed by the symptoms of underlying sarcoidosis [15]. Dyspnea, cough, decreased exercise tolerance and fatigue are frequently encountered in both situations. The most common symptom is worsening of dyspnea on exertion which is usually attributed to underlying sarcoidosis associated parenchymal disease. There may be other symptoms such as extremity edema, dizziness, syncope, palpitations and chest pain that are assigned to other common diseases. The clinical signs of right heart failure are not reliable as they have a low sensitivity and are present in only 21% of the patients [9]. A high index of suspicion is required for the identification of SPH. BNP and NT-proBNP levels are elevated in pulmonary hypertension. They may be useful for diagnosis and predicting the prognostic outcome. Fibrin, D-dimer, Troponin-T, uric acid and exhaled NO levels may be other crucial diagnostic markers.

Treatment and Prognosis
The ideal treatment for SPH is still controversial due to the limited data in different patient profiles. Current data available on the long term influence and benefit of pulmonary hypertension targeted medications in SPH is scarce. Most of the studies consist of retrospective case series with only three prospective studies [21- 23]. The first step in treatment is the search for risk factors and comorbid diseases. Heart failure, thromboembolic disease, muscle involvement of sarcoidosis, obstructive sleep apnea, resting, exertional and nocturnal hypoxemia requires conventional treatment. On the other hand, the use of currently available pulmonary vasodilators is debatable due to the lack of studies that indicate their effect in SPH patients. There are no prospective therapeutic trials in patients with SPH. Indeed, these patients have specifically been excluded from trials in patients with pulmonary arterial hypertension (PAH, WHO group 1) while there have been a number of case series attesting to the potential utility of medications for SPH patients. In patients with significant parenchymal lung disease, there is the theoretical possibility of worsening of hypoxemia due to the ventilation perfusion mismatch that necessitates meticulous use of pulmonary vasodilator agents. The currently available treatment protocole includes the endothelin, nitric oxide and the prostacyclin pathways while which of these mechanisms play a more dominant role in SPH is unknown [24]. Steroids should be considered in patients with active disease and in cases with bulky lymphadenopathy where compression of the central vessels is a feature since none of the studies with stage IV patients revealed a significant hemodynamic response to corticosteroids [10,24].

High levels of endothelin-1 in SPH is the fundamental indication for the use of endothelin receptor antagonists in these cases. Experience with these agents is limited to a few case series. Baughman has revealed a decrease of 15mm Hg in the mPAP after 4 months of treatment [8,24]. Barnett has shown improvement in the mPAP, pulmonary vascular resistance and 6MWT in patients with limited fibrosis but the 3 year survival prognosis was poor [25]. Bosentan has been proved to be useful in this patient population [19,26]. Nitric oxide is a potent vasodilator with a short half-life that is delivered by inhalation. Although nitric oxide produces reduction in mPAP and RVR with an increase in cardiax index there is no significant change in the 6MMW distance. The role of phosphodiesterase inhibitors should be determined by further studies [21,24,25]. The prostanoid analogues are potent vasodilators that also inhibit platelet agregation. They are administered intravenously, subcutaneously or via the inhaled route [25]. Data about epoprostenol use in SPH is very limited but the agent may cause more than 20% decrease in the PVR (21). Treatment options for sarcoidosis associated pulmonary hypertension are depicted in Table 3 [26-29].

Endovascular procedures with angioplasty and stent placement may be other treatment options in patients with extrinsic compression of the pulmonary arteries. These treatment methods carry a high mortality and should be used only in selected patients. Lung transplantation may be considered in patients unresponsive to conventional treatment strategies. Several factors are to be noted for reduced survival in SPH patients (Table 4). Patients with a high PVR, a PA systolic pressure higher than 50mm Hg, a low FVC and a low DLCO are associated with high mortality and a worse prognosis [30]. 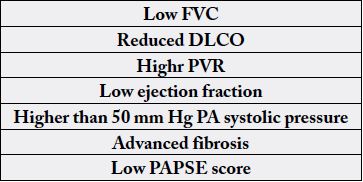 Conclusions
SPH is a significant diagnostic and a therapeutic challenge for the pulmonary clinician. The pathogenesis is complex involving mechanisms other than parenchymal fibrosis and hypoxemia. SPH leads to a decreased survival which is the primary target of treatment. Patients also present with life disturbing symptoms like dyspnea that interferes with the quality of life. It is mandatory to define a therapeutic approach for the individual patient phenotype who will respond and least likely detoriate from treatment. Each patient should be closely monitored and followed objectively preforming 6 MWT and echocardiogram at three months apart on outpatient basis. The treatment should be discontinued in the absence of improvement or in the presence of significant drug side effects. Pulmonary vasodilators may increase quality of life, decrease symptoms and improve exercise tolerance in some patients. Further studies with larger populations are required to determine whether the vasodilator treatment will change the prognostic outcome and the natural disease course in the SPH patients.