Copyright © 2018 Dr. Agustín Joison, et al. This is an open access article distributed under the Creative Commons Attribution License, which permits unrestricted use, distribution, and reproduction in any medium, provided the original work is properly cited.

Coronary artery disease evolves into a series of events which include unstable angina, acute myocardial infarction. These terms are called acute coronary syndrome. Concerning the same it is classified according to the electrocardiogram in ST-elevation myocardial infarction and non STelevation. Cardiac troponin-I as cardiac biomarker allows the myocardial injury in patients and values of serum cTn-I are measured join coronary angiography, at respect the increase in that biomarker is associated to extent of damage and severity of coronary arteries.

A descriptive, observational, and random study in 219 patients with non ST-elevation myocardial infarction was develop between 2014 and 2016 in the coronary unit of the “Reina Fabiola” Clinic, Córdoba, Argentina. Cardiac troponin I testing was measured baseline in emergency room (0) and 8, 12 and 24 hs after admission to coronary unit. Percent of obstruction more than 70% stenosis was considerate moderate-severe and less than 30% normal-mild.

No significant differences founded between percent of obstruction in arteries and both groups with low (≤ 0.01ng/ml) or high (> 0.01ng/ml) values of cTnI, there was not a significant linear correlation between obstruction percent (%) and cTnI levels, there were less patients with cTnI > 0.01ng/ml in normal-mild stenosis at 8 and 12 hs respect to moderate-severe stenosis.

This study allows us to define sensitivity variations at different hours of cTnI respect to coronary stenosis degree in NSTEMI patients.

Introduction
Coronary artery disease evolves into a series of events which include unstable angina, acute myocardial infarction (AMI); these terms are called acute coronary syndrome. Concerning the same it is classified according to the electrocardiogram (ECG) in ST-elevation myocardial infarction (STEMI) and non ST-elevation (NSTEMI). Chest pain is the main symptom of ischemic heart disease, however, can be difficult to diagnose it correctly, especially in emergency department, due to the ambiguity in the presentation of the pain in some patients [1]. Often patients who have been diagnosed with NSTEMI need to confirm the severity of arteries occlusion by coronary angiography [2]. Damage of the coronary arteries involves atherosclerotic plugs formation and subsequent rupture of the same, with activation of platelets and the coagulation system, developing a thrombosis. In acute coronary syndrome (ACS), arteriography allows an assessment of the degree of stenosis of vessel regarding the severity and prognosis early risk stratification is essential [3,4]. Cardiac troponin-I (cTnI) as cardiac biomarker allows the myocardial injury in patients and values of serum cTn-I are measured join coronary angiography, at respect the increase in that biomarker is associated to extent of damage and severity of coronary arteries. In NSTEMI coronary angiography have not been well determined its correlation with border line raised cTnI level [5]. The release of cTnI in blood suggest a myofibril damage, but the sensitivity was insufficient to detect a minor myocardial injury [6]. Several showed a positive relationship between increased troponins and the prognosis of patients with ACS, but there was not enough evidence the relationship between this biomarker and the complexity of angiographic coronary lesions [7,8]. The objective of our study was to analyze the cTnI sensitivity respect to stenosis severity in a consecutive series of patients with NSTEMI.

Materials and Methods
A descriptive, observational, and random study in 219 patients with NSTEMI was develop between 2014 and 2016 in the coronary unit of the “Reina Fabiola” Clinic, Córdoba, Argentina. They were assigned randomly to coronary angiography. The median time pain consultation (TPC) was 2.04 ± 1.43 hours (hs). Eligible patients were between 31 and 92 years of age, had symptoms consistent with ACS. Exclusion criteria included all cardiac diseases that not involve NSTEMI. Written informed consent was obtained from all patients. cTnI testing: baseline in emergency room (0) and 8, 12 and 24 hs after admission to coronary unit. Blood samples were to be collected in all. cTnI was measured in using the TnI-Ultra assay measured by Enzyme Linked Fluorescent Assay (ELFA) Biomeriux (France). The lower limit of detection was ≤ 0.01ng/ml. Angiography equipment input Philips OPTIMUS (Germany): 25 uR / image, 80 uR F / sec with fluoroscopy (RT angiodig) digital angiography System. Based on the percent (%) of obstruction more than 70% stenosis was considerate moderate-severe and less than 30% normal-mild.

Statistical analysis was performed using SPSS software for Windows, version 20.0 (SPSS Inc., Chicago, IL, USA). All data were expressed as mean ± SD or SEM. Clinical baseline characteristics were measured using frequency analysis. The random variables quantitative relation was studied by correlations expressed using the Spearman correlation coefficient. Comparisons between groups are made using ANOVA II and Sidak’s post hoc test. Association of cTnI values and coronary stenosis were performed with Chi square. The receiver operator characteristic (ROC) curve analysis was performed to identify the sensitivity and specificity of the best cutoff point of troponin as a discriminator of the probability of significant coronary lesion, and 95% confidence interval (CI) was used. In all the studies the values of p < 0.05 were considered statistically significant.

Results
Patients’ age varied from 31 to 92 years, 78% of patients were male, with coronary heart disease (CHD) and most of them reported episodes of severe angina pectoris with coronary occlusion severe. Distribution of patients by history of diseases is described in Table 1. 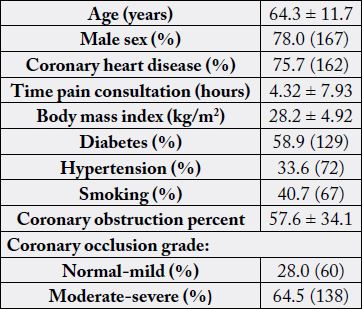 During the study period patients included with NSTEMI, no significant differences founded between percent of obstruction in coronary arteries and both groups with low (≤ 0.01ng/ml) or high (>0.01ng/ml) values of cTnI (p > 0.05), at admission to coronary unit (0 hs) and after undergoing coronary angiography 8, 12, and 24 hs (Table 2).

Standard error of the mean (SEM)

In concordance with the percent of artery obstruction respect to cTnI status, stenosis of coronary arteries in figure 1 showed that no significant differences in cTnI levels (≤ 0.01; > 0.01 ng/ml) respect either normalmild and moderate-severe stenosis.

There was not a significant linear correlation between obstruction percent (%) and cTnI levels at 0 hs (emergency room) (Figure 2A) and 8, 12, 24 hs after admission to coronary unit (Figure 2B, C y D respectively).

Figure 2: Correlation between percent of obstruction (%) and plasmatic cTnI levels

After confirm the no correlation between biomarker and percent of obstruction, cTnI levels sensitivity was analyzed respect to coronary stenosis. As result there were less patients with cTnI > 0.01 ng/ml in normalmild stenosis at 8 and 12 hs respect to moderate-severe stenosis, but the sensitivity remain with lower values (Table 3).

Table 3: Percent of patients who have high or low values of cTnI respect to coronary stenosis. 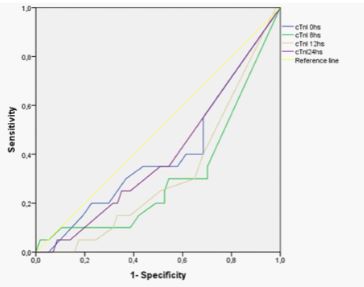 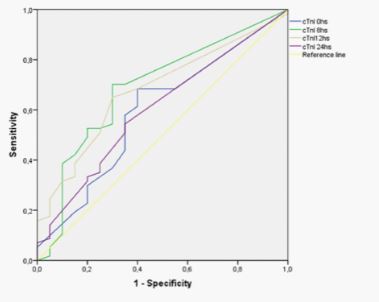 Discussions
After analyzed in these patients the mean age was (64.3) years, sex (heights prevalent NSTEMI in male), more than half of patients were diabetic and 33.6% hypertensive were similar with data from another authors [9]. By contrast majority of patients arose before of 12 hours (mean 4.32) of onset of chest pain. Patients who were enrolled in our study and had underwent a angiography after 0 hs and during the admission to coronary unit showed significant moderate and severe stenosis of coronary artery stenosis >50%. At respect these results was not observed in another study with patients who suffered NSTEMI with only normal-mild coronary stenosis (<18%) [10], possibly that our patients has more co-morbidities. Coronary stenosis is a frequent event in patients with ACS and consistent with an ongoing ischemic process. At respect authors has been descripted an 80% of patients with elevated cTnI in emergency room and after 8, 12 hs when coronary stenosis was higher (>50%), respect lower stenosis (10-20%) [11]. This is discrepant with our results; at respect no differences was founded with high levels of cTnI either normal-mild or moderate-severe stenosis. In reference to stenosis as obstruction percent no linear correlation was founded with cTnI values.

Studies had leakage of cTnI sensitivity reflecting injury to the myocardium likely as a consequence of different coronary stenosis in most cases [14]. The ROC curve were 0.703 (95% CI: 0.66 - 0.74) and 0.608 (95% CI: 0.52 - 0.70), respectively. The area under the ROC curve between cTnI levels and moderate - severe coronary lesions was 0.685 (95% CI: 0.65 - 0.72, and the best cutoff points to discriminate the presence of significant coronary lesion were 0.061ng/ml (sensitivity 63.4%) [15]. Our results showed highlight the difficulties in the establishment of clinically useful cutoffs, and several conditions of patients may be suggest as possible reasons for lower sensitivity of cTnI respect to coronary damage: left ventricular remodeling decrease in pharmacological treatments for arterial hypertension, troponin release, and clearance increased.

After analyze cTnI levels as surrogate biomarkers of NSTEMI, the distinction between normal - mild and moderate - severe stenosis was accurate, with sensitivities of 30% to 65%, but not enough in moderate - severe along. Finally, can we define criteria and decision limits the safety of our patients? When it comes, the situation about to low sensitivity of cTnI seems slightly complicated, and we may need to define new decision for the diagnosis of acute ischemic diseases and stenosis severity before to make some intervention procedure. In addition to this, we may define levels cut-off of cTnI to meet specific clinical needs, but as indicated previously, this will have to await further studies.

Conclusions
This study allows us to define sensitivity variations at different hours of cTnI respect to coronary stenosis degree in NSTEMI patients. This information is novel and very important for our understanding of how to optimize the clinical utility of cTnI measurements in the diagnosis and outcome prediction of coronary disease.