Is Rheumatic Heart Disease Still Endemic in Tunisia? A Review of 14-year Period and Future Projections

Copyright © 2018 Dr. Houda Ben Ayed, et al. This is an open access article distributed under the Creative Commons Attribution License, which permits unrestricted use, distribution, and reproduction in any medium, provided the original work is properly cited.

Rheumatic heart disease (RHD) ranks among the leading causes of non-communicable diseases in developing countries. Tunisia is recognized as an endemic area of RHD. Our study aimed to determine the epidemiological specificities of RHD and to assess its chronological trends over time.

We retrospectively collected data from the regional morbidity register of Hedi Chaker University Hospital, South of Tunisia between 2003 and 2016. Joinpoint regression analysis was performed to study the chronological trends of RHD over time (Annual Percentage Change (APC); p).

Inspite of declining curves in the hospitalizations of RHD, it still remains a major public health problem for both sexes and in all age-groups. The decreasing trend was mainly observed among young patients, with a significant change over time.

Introduction
Rheumatic heart disease (RHD) ranks among the leading causes of non-communicable diseases in low-income and middle-income countries and causes up to 250000 premature deaths every year [1]. It results from a primary infection in the upper respiratory tract or from a re-infection or a relapse associated with an inappropriate inflammatory response to the group A beta hemolytic Streptococci [2]. According to the WHO, 12 million people worldwide are affected by rheumatic fever and rheumatic heart disease, among whom 79% live in the developing countries, particularly those in the African continent [3]. It continues to be a major public health challenge in limited resources countries, accounting for a great cardiovascular-related loss of disability-adjusted life-years worldwide [4]. RHD affects the most productive part of the population, which may lead to undermine national productivity. Its epidemiology parallels most indicators of poverty, notably poor hygiene, household crowding, poor living conditions, social inequality and limited access to healthcare. In high-income countries, the burden of RHD decreased markedly during the 20th century, attributable to socioeconomic development and advances in medical management [5].

Recently, there has been an increasing interest in the burden of RHD, driven in part by the growing costs attributable to this disease and the utmost need to yield standards level in cardio-vascular health. Epidemiological surveillance is particularly interesting in endemic area, allowing health authorities to prioritize preventive and curative interventions accordingly. Tunisia is recognized as an endemic area of RHD. Otherwise, updated and reliable data of RHD incidence in South of Tunisia are weakly documented. Therefore, our study aimed to determine the epidemiological specificities of RHD and to assess its chronological trends over time.

We retrospectively collected data from the regional morbidity register of Hedi Chaker University Hospital (HCUH), South of Tunisia, from January 1st, 2003 to December 31st, 2016. The register was implemented by the community health and epidemiology department since 1990 and received information periodically from all departments of HCUH. Patients were hospitalized essentially in cardiology department, which included intensive care unit and applied the highest cardiologic expertise and advanced diagnostic investigations to make definitive diagnoses and provide medical care.

We included all newly diagnosed patients with RHD, who were hospitalized at HCUH during the study period. Patients ultimately diagnosed RHD were encoded according to the International Classification of Diseases-10 (ICD-10) (I01, I05, I06, I07, I08, I09). Patients hospitalized for acute articular rheumatism without carditis or other complications coded in ICD-10 as I00. I02 were not included. We included only patients living in Sfax governorate.

During the study period, the definitions of RHD were unified. The database variables included patients’ socio-demographic characteristics and hospitalization characteristics such as length of hospital stay, the discharge status (home return, transfer to other departments or others hospitals and death). The crude hospital incidence rate (CHIR) of RHD was calculated based on Tunisian National Institute of Statistics data and was expressed as the number per 100000 person-year (PY).

In order to analyze trends in RHD hospitalizations, the Joinpoint Regression Analysis program, version 4.6.0.0 was performed. Joinpoint fits a linear regression model to the data to detect periods with statistically distinct log-linear trends over time. A significance level of 0.05 was used for the permutation test, which determines the minimum number of “joinpoints” necessary to fit the data. The annual percent change (APC) within each segment was calculated with 95% confidence interval (95% CI).

To perform RHD projection for 2026, an age-period cohort model was performed assuming a Poisson regression model for the counts of the cases. We estimated the mean number of new cases of RHD in each year, with lower and upper credible intervals (LCrI, UCrI). 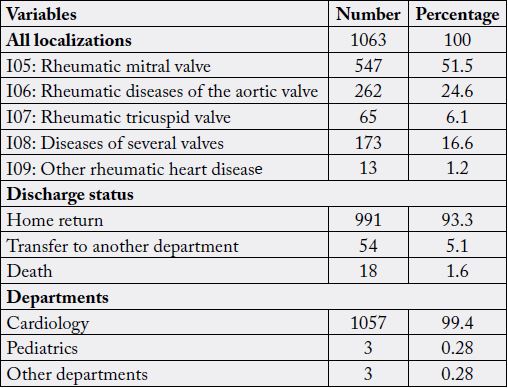 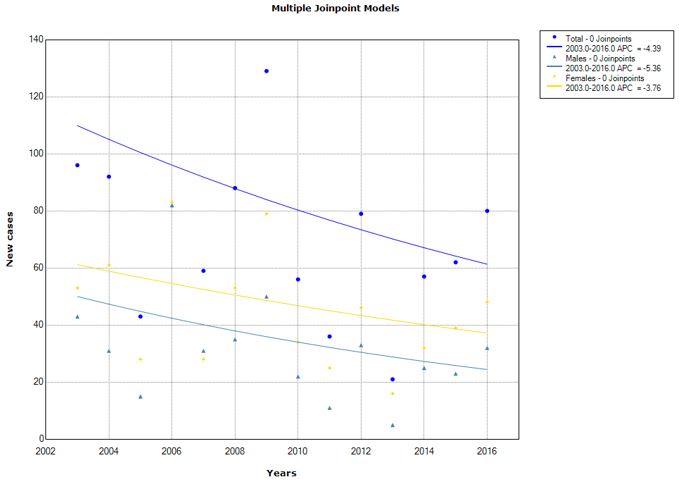 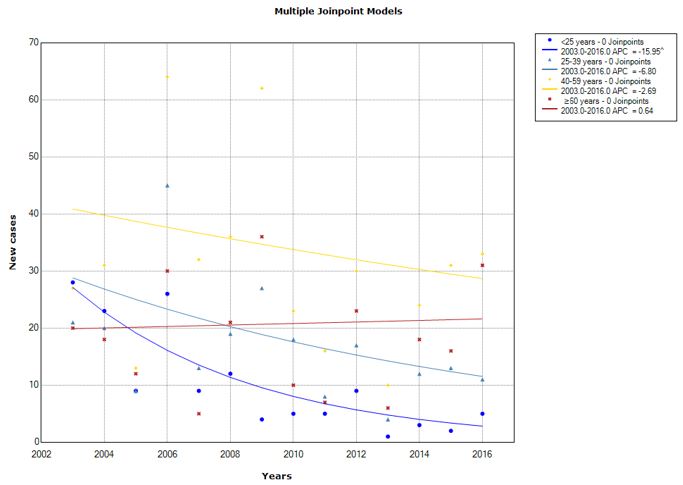 Figure 2: Chronological trends of rheumatic heart disease hospitalizations by age-group in Southern Tunisia during the period 2003-2016 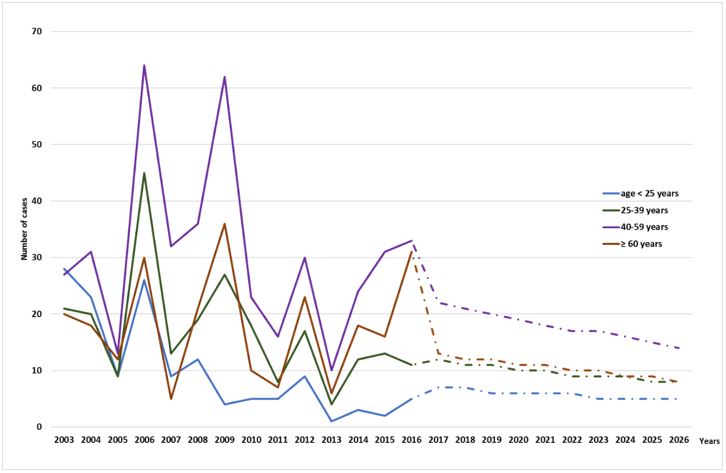 Figure 3: Annual number new cases for the observed (2003-2016) and the predicted periods (2016-2026) of rheumatic heart disease hospitalizations in Southern Tunisia by age-group

Discussion
Rheumatic heart disease is one of the most common and preventable acquired heart diseases. In highincome countries, the burden of RHD decreased markedly during the 20th century, attributable to improved living conditions associated with socioeconomic development and advances in medical management [6]. In the developing countries, militating against RHD remains a daily challenge, due to a poor awareness of physicians as well as patients of the importance of penicillin usage for acute rheumatic fever. The estimated number of RHD in 2015 was 33194900 cases that occurred in countries with an endemic pattern of disease, while only 221600 cases were in countries with a non-endemic pattern [5].The highest prevalence rates were in Western Pacific Region Oceania, followed by central sub-Saharan Africa and South Asia [5,6]. In 2015, the countries with the largest estimated numbers of cases of RHD were India (13.17 million cases), China (7.07 million), Pakistan (2.25 million), Indonesia (1.18 million) and the Democratic Republic of the Congo (805000), together accounting for 73% of global cases [5]. At a local level, a previous survey conducted on a hospital-based population in Central-east of Tunisia during the same period reported a total number of 1063 hospitalizations for RHD, with an incidence of 10.97/100 000 PY [7], which was similar to our findings.

Another important finding in our study suggested the predominance of RHD among women. Various other studies also revealed higher rates among females [9,10]. It has been reported that female gender was associated with a higher risk of having borderline RHD, with an OR of 1.9 [11]. This might be the result of innate susceptibility or an increased exposure to group A streptococcus probably due to a greater involvement of women in child rearing.

During the study period, the diagnosis age of patients with RHD has significantly increased over time and the highest HCIR was observed among elderly (age ≥ 60 year). These results were in line with other Korean studies reporting higher prevalence rates of RHD among older age groups, resulting in high disease burden and increasing health-care costs [12,13]. These findings supported the hypothesis suggesting that RHD can occur at any age, even at an advanced age, which reflected the under-screening rate of RHD during childhood. Therefore, future designs of cardiovascular healthcare services in countries with a rapidly aging population should be urgently implemented. The lowest rate was observed among younger patients (age < 25 years). These results were not contrasting with previous researches reporting high prevalence of RHD among children and adolescents [14-16], but highlighted the long latency period between the pharyngeal infection with Group A β hemolytic Streptococcus, the acute rheumatic fever, followed by asymptomatic involvement of the heart valves fibrosis and the beginning of clinical signs in our population. Thus, we should emphasize on the value of school screening programs for detecting asymptomatic RHD as an effective alternative to morbidity registers that are based solely on clinical encounters.

The number of cases in developed countries have reduced drastically [5]. However, the same did not apply to developing countries, like those in sub-Saharan Africa. In Nigeria, the prevalence of RHD has increased from 2.9 to 9.8% and from 17.4 to 57.7% for the structural and acquired heart diseases, respectively [19]. On the other hand, a significant decline was noted in a previous Tunisian study conducted from 2000 to 2013 [7], which was consistent with our study. This might be explicated by the implementation of acute articular rheumatism monitoring program in Tunisia since 1980, the delivery of penicillin for the treatment of sore throat, notably at an early age, and the health education of the parents concerning the therapeutic observance during the treatment of angina, which provided a strong explanation for the significant decrease of RHD among patients under 25 years. Furthermore, our country is undergoing an epidemiological transition during the last decades, characterized by the predominance of chronic diseases, mainly ischemic heart disease at the expense of infectious diseases.

Conclusion
Our study provided original findings about the substantial burden of RHD in Southern Tunisia. In spite of declining curves in the hospitalizations of RHD, it still remains a major public health problem for both sexes and in all age-groups. The decreasing trend was mainly observed among young patients, with a significant change over time. A reduction in social inequalities and unified global approach based on early screening of silent RHD at an early age represent the cornerstones of community-based prevention of RHD, particularly in low-resources countries.

Supplementary Files (if applicable)
Not applicable