Copyright © 2020 Dr. Fatemeh Abbaszadeh, et al. This is an open access article distributed under the Creative Commons Attribution License, which permits unrestricted use, distribution, and reproduction in any medium, provided the original work is properly cited.

Next-generation sequencing (NGS) has changed genetic diagnostics due to its high throughput, speed, and cost-effectiveness. This paper describes the challenges that were faced in detection of the frameshift variant c.1175_1214del in the BRCA1 gene, undetectable by CNV analysis, using Oncomine BRCA Research Assay (OBRA) and Ion Torrent platform. This paper also describes the bioinformatic strategy implemented to successfully detect and annotate this large deletion. Frameshift variants comprise the highest proportion (>60%) of pathogenic variants identified in BRCA1/2 genes and a false negative BRCA1/2 result leads to the provision of inaccurate genetic counseling and has negative impacts on medical management and risk assessment for BRCA-related cancer patients and their at-risk relatives.

The BRCA1 heterozygous c.1175_1214del was initially undetectable by the Ion Reporter software because the deletion coincides with the primer binding sites of two overlapping amplicons in the OBRA kit. This resulted in generation of low frequency super-amplicons during multiplex-PCR. To overcome this assay’s primer design problem bioinformatically, we removed the default genomic coordinates for the relevant amplicons in the designed bed file for OBRA and replaced it with the corresponding coordinates for a super-amplicon. This resulted in overall reduction of read depth coverage as shorter reads derived from the normal allele were not counted in read depth calculation by the software. This read depth reduction, indirectly increased frequency of the deletion and facilitated its detection.

To further increase the software sensitivity for detection of this deletion without introducing false positives, we added the c.1175_1214del as a hotspot in the analysis workflow.

This bioinformatic approach is not limited to detection of deletions in BRCA1/2 genes using Ion Torrent platform. We believe it can be applied for detection of any frameshift variants in any genes that are sequenced by any NGS platforms that are compatible with multiplex-PCR library preparation. This strategy avoids the need for supplementary test to detect missed variants, redesigning of primers for the NGS assay, the wait for availability of the improved version of assay design in the market and reduces the risk of false negative results.

Introduction
Hereditary breast and ovarian cancer (HBOC) is an inherited cancer predisposition syndrome. The features suggestive of a hereditary cancer predisposition include: early onset of cancer, multiple primary cancers in a single individual, bilateral tumors, and a family history of cancer of the same spectrum in multiple generations along the same lineage. HBOC is characterized by an increased risk of breast cancer in both female and male, ovarian cancer in females, and to a lesser degree other cancer including prostate cancer, melanoma and pancreatic cancer.

Pathogenic variants in BRCA1 and BRCA2 highly penetrant genes account for 20-25% of hereditary breast cancers [1], 5-10% of all breast cancers [2], and around 15% of all ovarian cancers [3].The demand for BRCA diagnostic genetic testing has steadily increased due to elevated public awareness of breast cancer, significantly increased risk of developing breast and/or ovarian cancer in individuals carrying BRCA pathogenic variants compared to general population, and the availability of established management guidelines including routine surveillance, prophylactic measures and targeted therapies. This increasing demand for BRCA testing places a strain on diagnostic laboratories. To accommodate this pressure, and owing to the large size of the BRCA genes and no-mutation hot spots more diagnostic laboratories take advantage of advances in sequencing technologies, namely next generation sequencing (NGS), which allows for fast, scalable, and cost-efficient BRCA gene panel testing compared to traditional Sanger sequencing. However, transitioning from Sanger sequencing to NGS for BRCA in a clinical diagnostic laboratory is not an straight forward process and requires a significant validation to demonstrate the NGS assay including the wet procedure and bioinformatics analysis are precise, sensitive, specific and fit for the purpose prior to its adoption.

In our diagnostic laboratory, we validated BRCA NGS by Oncomine BRCA Research Assay (Life Technologies) using the Ion Torrent platform (Chef and Ion S5 sequencer) due to its locked down workflow and rapid turnaround time (TAT). This paper covers the challenges that were faced in detection of a heterozygous 40bp deletion in BRCA1 (c.1175_1214del (p.Leu392fs); (rs80359874)) in a known positive control sample during validation of this assay and describes the bioinformatic method that was adopted to detect and annotate this large deletion. It is worthwhile mentioning that this deletion is not long enough to be detected by CNV algorithms of the analysis software, further demonstrating the importance of the bioinformatic changes that result in detection of this deletion. Frameshift variants account for >60% of pathogenic variants identified in each of the BRCA1/2 genes [4] and identification of these variants is essential for the provision of genetic counselling, medical management, and establishment of risk reduction strategies for BRCA-related cancer patients and their at risk family members.

we successfully identified the BRCA1 c.1175_1214del in two patients with HBOC with the help of this bioinformatic method. This pathogenic variant has a rare population frequency (0.00001 in ExAC database) [5] but it is the tenth most frequent pathogenic variant identified in North American breast cancer families, accounting for 1% of such families [6].

This bioinformatic approach is not limited to detection of deletions in BRCA1/2 genes using Ion Torrent platform. We believe that the same or a similar approach can be applied for detection of any large frameshift variant below the amplicon size (typically <100 bp) in any genes that are missed detection by the analysis software due to problems in amplicon-based NGS assay designs, low depth of read coverage, or low variant frequency. As a substantial number of diagnostic laboratories use Illumina platform for diagnostic testing of BRCA1/2 genes, we checked the designed bed file for the AmpliSeq for Illumina BRCA Panel [7] and found out that the genomic coordinates for amplicons encompassing the BRCA1 c.1175_1214del are the same as coordinates in OBRA bed file. Therefore, it is important to highlight the risk of a false negative result for the BRCA1 c.1175_1214del using this Illumine panel and that the described bioinformatic method has the potential for detection of this variant in samples sequenced on Illumina platform as well.

Material and Methods
A total of 43 samples were used to establish and validate a processing and analytical workflow for next generation sequencing (NGS) of BRCA genes using the Oncomine BRCA Research Assay and Ion S5 sequencer. These included 28 reference DNA samples with known pathogenic variants in BRCA genes and 15 negative samples. Amongst the positive reference samples was a sample with 40bp deletion in BRCA1 (c.1175_1214del), which was purchased from Coriell (NA14094) (https://www.coriell.org/0/Sections/ Search/Sample_Detail.aspx?Ref=GM14094&PgId=166). 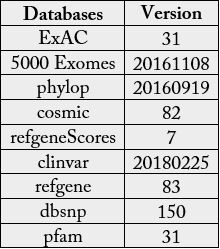 List of databases that were used for annotation of germline variants in BRCA1/2 genes.

Results
Sample NA14094 is the positive reference DNA, which contains the heterozygous c.1175_1214del in the BRCA1 gene. Testing this sample with OBRA kit achieved 100x depth of coverage for all targeted amplicons and nucleotides in BRCA genes (Figure.1). 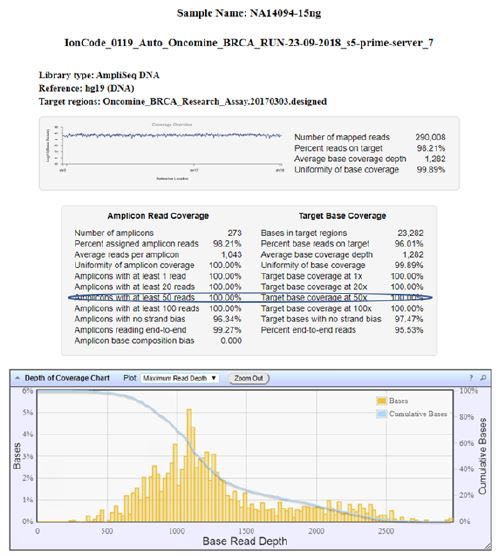 However, Ion Reporter failed to detect and annotate the c.1175_1214del in BRCA1 gene in this sample. Furthermore, this variant was not present in the list of filtered out variants. To rule out the possibility of a sample swap this sample was tested by Sanger sequencing and the variant was detected correctly (Figure. 2).

The original chromosomal coordinates for amplicons OBRA_BRCA_81 to OBRA_BRCA_83 in the designed bed file by Life Technologies for OBRA assay. 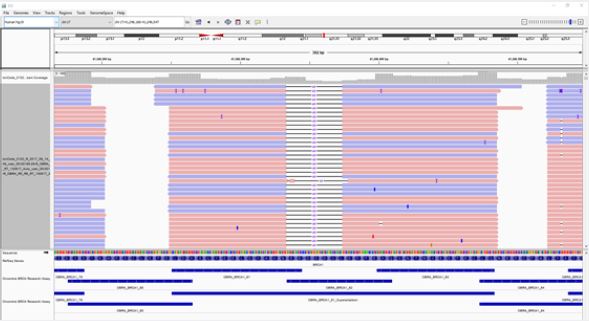 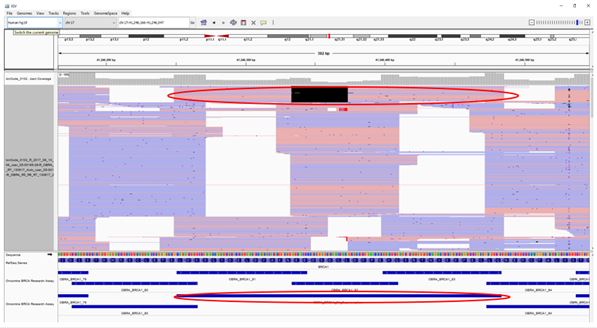 To further increase the detection rate of this large deletion we introduced the c.1175_1214del variant as a hotspot in the analysis workflow. The default minimum variant frequency for hotspot indels is 10%. This approach increased the software detection sensitivity for this variant only and minimized the risk of introducing any false positive results that may have been detected if the frequency for all indels in the workflow was reduced.

Discussion
We investigated the reason for lack of detection of BRCA1 c.1175_1214del heterozygous variant in the Coriell NA14094 reference sample that was used for validation of Oncomine BRCA Research Assay (OBRA) using Ion Chef and Ion S5 sequencer in our diagnostic laboratory.

OBRA uses a massively multiplex PCR for library preparation. We demonstrated through IGV that the BRCA1 c.1175_1214del deletes the primer binding sites of two of the assay amplicons (OBRA_BRCA1_81 and OBRA_BRCA1_82) and therefore these two amplicons do not individually amplify efficiently on the allele containing the deletion. However, this deletion causes the forward primers for amplicon 81 and the reverse primers for amplicon 82 to amplify a super-amplicon. Also, the forward primers of amplicon 81 and the reverse primers of amplicon 83 amplify another super-amplicon on the deleted allele. The frequency of the generated super-amplicons (11%) is below the default minimum required variant frequency for detection of indels, which is 25%.

We tried to overcome this primer design problem of the assay, bioinformatically by removing the default genomic coordinates for amplicons 81, 82, and 83 in the designed bed file that was provided by Life Technologies for OBRA and replacing it with the custom-made coordinates for a super-amplicon consisting of these three amplicons. This resulted in reduction of read depth coverage as all shorter reads created by the normal allele were not recognized by the software and not counted in read depth of coverage calculation. Because of this read depth reduction, the deletion frequency automatically increased, elevating the chance of its detection by the software.

To further increase the chance of detection of this large deletion we introduced the c.1175_1214del variant as a hotspot in the analysis workflow. The default minimum variant frequency for hotspot indels is 10%. This approach increased the detection sensitivity of the Ion Reporter software for this particular variant without the risk of introducing many unnecessary false positives that may have been detected by overall reduction of frequency of all indel in the workflow.

Conclusion
The described approach in this paper can be adopted when encountering technical design problems in any multiplex PCR-based NGS assays resulting from large indels that coincide with primer binding sites of some amplicons. Such assay design problems may lead to low depth of read coverage or low variant frequency and false negative results. This approach minimizes the risk of false negative results and the need for redesigning of the assay, the wait for the next version of improved assay to become available in the market, or the need for a supplementary test to detect missed variants.

Acknowledgements
We thank Krunal Pawar for his bioinformatics assistance and Dr. Sudheer for technical & clerical assistance.

Conflict of Interests
None declared