Copyright © 2019 Dr. Lazo, R., et al. This is an open access article distributed under the Creative Commons Attribution License, which permits unrestricted use, distribution, and reproduction in any medium, provided the original work is properly cited.

The hormone - dependence of breast cancer has been established for over a century but new investigations in its knowledge have gone away introducing with the step of years. Estrogen and progesterone receptors have been standards for the guide of treatment, but recently waste of cholesterol has emerged as a new perspective for the guide of treatment. It has been known for a long time that 5% of patients that did not show estrogen and progesterone receptors in their tumors have response to hormone-therapy. A new way of hormone-dependence is the formula of the waste of cholesterol, it is based on the levels of lipoproteins, LDL and HDL cholesterols, which can identify the endocrine balance.

We observed that during the follow-up of the patient for ten years she had only one time the red color, which means that there is an endocrine misbalance that has to receive medical intervention. In this case atorvastatin was indicated and out of this measurement the patient was maintained in the endocrine balance. As a result of this study a patient with bad prognosis because of Stage IIIa with 9 lymph nodes infiltrated in the axillary clearance, an undifferentiated tumor, and because she was RE-, RPG - and Her 2 3+ could be free of disease for more than 10 years, with adjuvant tamoxifen treatment. Although one patient does not represent so much, the new discoveries regarding cancer presented in our investigations show a new hope for this type of breast cancer in order to avoid the relapse and it can easily be introduced in clinical trials.

Case Description
The clinical history 16021 of the III Congreso Hospital was reviewed. She was a patient of white race, 56 years old. She had an interval menarche menopause 28 years old. She was operated on June 3rd, 2009, of total mastectomy + axillary clearance. Biopsy report informed poorly differentiated infiltrated ductal carcinoma. The axillary clearance informed that out of 19 lymph nodes analyzed 9 were metastatic. She was classified as pT2N2 Mo. Stage IIIA. Immune-histochemical informed RE negative, Rpg negative and expression of HER2 3+. Before starting chemotherapy treatment cholesterol test was performed and the result was total cholesterol 4,6mmol/Ls and HDL cholesterol 0,83mmol/L; the formula of the waste of cholesterol was applied and the result was a waste of cholesterol -0,85 times the normal waste of cholesterol according to her age. So she was classified as negative waste of cholesterol Graphic 1. Twenty-eight days after operation she started chemotherapy with AC 4cycles and CMF 5 cycles together with radiotherapy 50 Gy in the lymph nodes regions and radiotherapy to chest wall + infraclavicular region, supraclavicular area and the axillary bed. Because we had had preliminary results that patients with negative waste of cholesterol that received chemotherapy and did not receive tamoxifen afterwards had 100% of relapses before 5 years, we proposed to the patient to receive tamoxifen treatment for 10 years and she accepted it. Patient did not receive Herceptin treatment because at that time it was not available in the institution. The follow-up of the patient can be seen in the digital sheet that can be seen in Graphic 2 and Graphic 3. 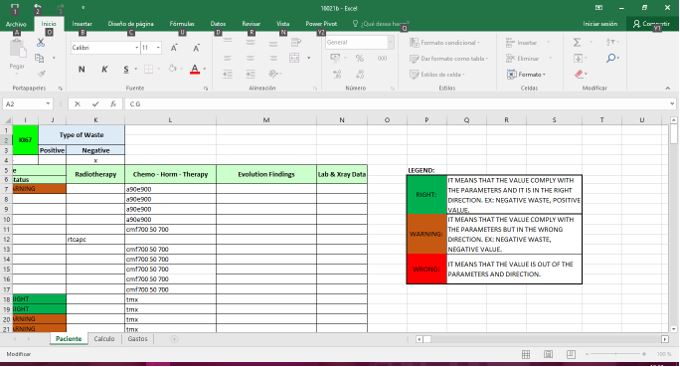 Graphic 2: Here we can see the different colors and what it means. Green represents the normal ciphers according to the waste and endocrine elasticity according to the age. Brown is a warning that something can be wrong. Red means that everything is wrong and the Medical Doctor should act with medication prescription or changing diet. 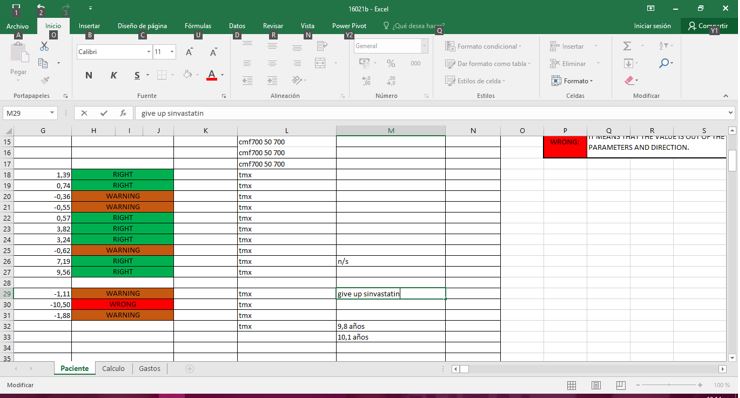 Graphic 3: Here we can see the last day of the medical room; in this case the evolution time after operation is more than ten years.