Report of the Cases


Fractures in Osteopetrosis: Two Case Reports and Review of the Literature

Copyright © 2019 Dr. Wang Fu, et al. This is an open access article distributed under the Creative Commons Attribution License, which permits unrestricted use, distribution, and reproduction in any medium, provided the original work is properly cited.

The occurrence of osteopetrosis is related to the function defect or the decrease of the number of osteoclasts, which is characterized by the abnormal activity of osteoclasts, bone resorption defect and bone sclerosis, and eventually leads to the increase of bone density, the narrowing or even disappearance of bone marrow cavity, and the brittle bones. The disease was first reported by German radiologist albers-schnberg in 1904. The disease is obviously hereditary and familial. According to the classification, there are different clinical manifestations in different systems of human body. At present, there is no clear incidence statistics in China, and most of the introductions about this disease at home and abroad are case reports. In this paper, the classification, diagnostic evaluation and treatment principles of osteopetrosis were reviewed by reviewing the literature and combining with two patients with osteopetrosis diagnosed and treated in our hospital, so as to provide clinical references for the diagnosis and treatment of osteopetrosis and improve the level of diagnosis and treatment of osteopetrosis.

Introduction
Osteopetrosis is also known as osteosclerosis disease, marblebone disease, primary brittle osteosclerosis disease, generalized brittle osteosclerosis, chalkopathy, etc. [1]. The disease was first reported by German radiologist albers-schnberg in 1904 [2,3], and then named as osteopetrosis disease according to its pathological characteristics. Osteopetrosis is a rare disease of abnormal osteoclast activity and bone resorption defect caused by the function defect of osteoclast or the decrease of the number of osteoclasts [4]. It is a kind of extensive skeletal disease characterized by osteosclerosis, obliteration of the medullary cavity, calcified cartilage, and brittle bones [5,6]. It has been reported in foreign literature that the incidence of osteopetrosis in North America is 1/500,000 [7]. According to epidemiological studies, Balemans, W., et al. reported that the average incidence of ADO was about 5/100,000, the average incidence of ARO was about 1/250,000, and XLO was extremely rare [8].

Clinical Classification and Characteristics
In 1942, CLAIRMONT and SCHING confirmed for the first time that osteopetrosis is familial inheritance[9]. Osteopetrosis according to their different disease genes can be divided into autosomal dominant osteopetrosis(ADO), autosomal recessive osteopetrosis(ARO), and X - linked osteopetrosis(XLO) three kinds. ADO is benign osteopetrosis, mostly occurs in adults, without obvious clinical manifestations. Most of the fractures were found in the proximal femur after admission due to trauma.ADO has three subtypes: benign Ⅰ type (ADO - Ⅰ), benign Ⅱ type (ADO - Ⅱ) and benign Ⅲ type (ADO - Ⅲ) [8,10]. ARO comes on early, occurs in infants and young children, mostly malignant, progresses rapidly, and has a high fatality rate [11]. XLO is even rarer.

Characteristic X-ray Features
Preoperative X-ray examination of the patient was shown in the following figures [12]: (1) increased bone density, osteosclerosis, obliteration of the medullary cavity, and calcified cartilage, also verified intraoperatively. (2) mild scoliosis of the spine with “sandwich verte- brae” sign; The epiphysis end of the four limb bone is widened, showing typical “erlenmeyer flask deformity” sign [13]; Rib “beaded” changes; (3) typical highdensity shadows at the skull base and pelvis, thickening of the skull, obvious hardening of the skull base, and typical “concentric ring sign” of iliac bone wings on both sides [14]; (4) various degrees of bone-in-bone phenomena can be seen in the bones of the limbs, fingers and metacarpal.

Report of the Cases
The two patients were informed that these cases studies would be submitted for publication, and they provided informed consent.

Case 1: the patient, male, 38 years old, was transferred to the department of trauma and emergency surgery of our hospital on February 22, 2018 due to “pain and dysfunction of right hip joint after trauma for more than one month”. Conservative treatment has been conducted since diagnosis in the local hospital in January. Physical examination after admission: right hip tenderness, percussion pain, limited movement, mild shortening deformity of the right lower extremity, good sense and movement of the right foot, good pulse of the dorsal foot artery, no obvious abnormality in the rest of the limbs. Admission diagnosis: 1. Subtrochanteric fracture of the right femur 2. osteopetrosis.

Figure a-e: X-ray of multiple parts of the body 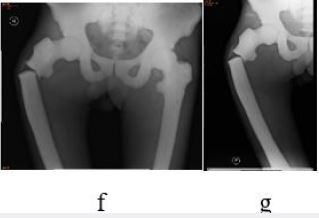 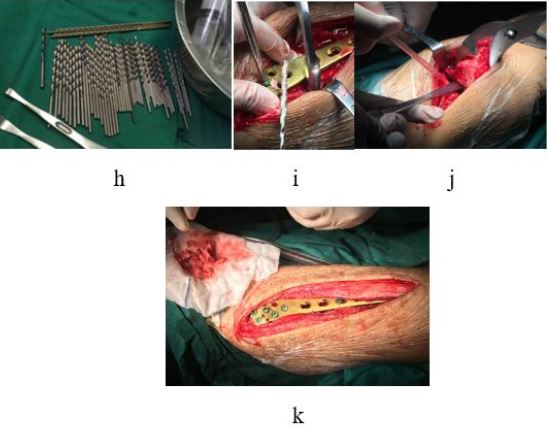 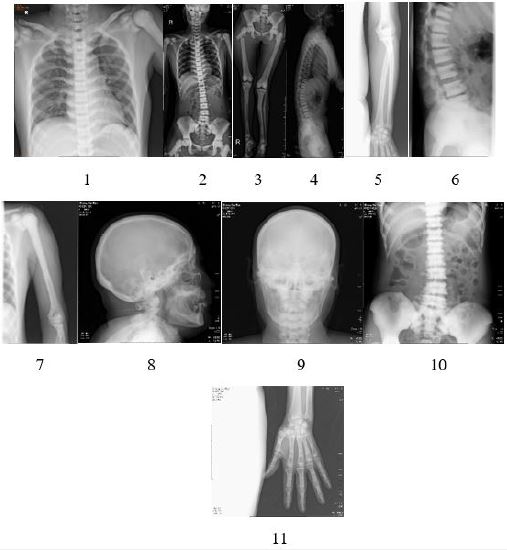 Figure 1-11: X-ray of multiple parts of the body

Figure 12: Anteroposterior radiography of both hips 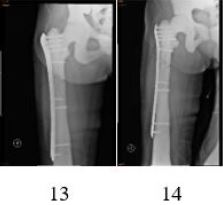 Discussion
Osteopetrosis disease is extremely rare in the world, and the search for clinical data at home and abroad is mostly reported cases. Currently, there is no unified treatment plan. Zhu Guanghua et al. proposed that hematopoietic stem cell transplantation can be used to treat osteopetrosis [15]. It has been pointed out in the literature that hematopoietic stem cell transplantation is an effective method for the treatment of osteopetrosis, and it can achieve a radical effect for some types [16]. Robert D Golden et al. successfully treated one patient with osteopetrosis by applying the internal fixation and recombinant human bone morphogenetic protein-7, but there was no data to support the application of recombinant human bone morphogenetic protein-7 in delayed healing of patients with osteopetrosis [17]. Srivastav Amit et al. used the distal femoral locking compression plate to treat osteopetrosis patients with subtrochanteric fractures, which healed 22 weeks later [18]. Based on the review of previous literature, f. Seyfettinoglu et al. believe that the treatment of fractures in patients with osteopetrosis will be difficult: healing takes a long time, various intraoperative problems such as broken drill bit may occur, and the risk of postoperative infection for these fractures is high. Spare bits should be used, absolutely following general disinfection rules to avoid infection. Regardless of the implant used, the perspective image must be carefully evaluated intraoperatively. Patience is necessary to open the medullary canal during surgery [19]. Huang, J., et al., treated displaced fracture with open reduction and internal fixation, and the fracture healed after 12 months [20]. Mert Kumbaraci et al. first applied PFNA in patients with osteopetrosis [21]. Kunnasegaran, R., et al., believed that tungsten carbide drill bit was a safe and effective method for treating proximal femur fracture with osteopetrosis [22]. Akira Hashimoto, et al. believe that THA is a very useful method for the treatment of osteopetrosis, but careful planning should be made in the treatment of THA [23].

Osteopetrosis is a rare hereditary disease in the world, there is currently no special clinical treatment,and we think the treatment difficulties mainly include the following aspects: 1. In patients with osteoblastoma, bone density increases uniformly and widely, hardening, narrowing or even disappearance of the medullary cavity, and difficulty in reaming, so intramedullary fixation is not the first choice, and steel plate internal fixation can be preferred; 2. Due to the high hardness and brittleness of the bone, it is very likely that the common rigid drill bit cannot drill through to the contralateral cortex, and even the drill bit fracture remains in the bone or causes fractures in other parts, which further increases the difficulty of operation; 3. After fracture fixation, the patient is more likely to suffer fracture or breakage of internal fixator when receiving external force; 4. Patients with osteopetrosis have poor intramedullary hematopoietic function, poor blood supply at the broken end of the fracture, and long healing time at the broken end of the fracture, ranging from several months to several years. It is highly likely that the fracture will not heal. All members of the department carried out active case discussions and formulated detailed operation plans according to the patients’ special conditions: the drill bit with higher strength tungsten carbide was used to avoid the breakage of the drill bit during the operation; At the same time, multiple sets of internal fixation devices should be fully prepared in case of unpredictable intraoperative events.

Conclusion
In conclusion, osteopetrosis is a rare genetic disease with diverse, complex and difficult clinical manifestations and with different treatment plans. At present, its pathogenic genes and pathogenesis need further exploration and research by medical personnel and scientific researchers, so as to provide convenience for clinical work. Specific X-ray imagings are the key points of its diagnosis. Appropriate symptomatic treatment should be given according to clinical symptoms and signs. We believe that for patients with this type ADO osteopetrosis, it is more effective to choose open reduction plate and screw internal fixation with comprehensive consideration.

Conflicts of Interest
The authors declare no conflict of interest in this work.