Copyright © 2019 Dr. Okigbo, R. N., et al. This is an open access article distributed under the Creative Commons Attribution License, which permits unrestricted use, distribution, and reproduction in any medium, provided the original work is properly cited.

Mushrooms which are saprophytes have been used in biodegradation. Pleurotus tuber-regium (Fr.) Singer, is the most common edible saprophytic mushroom in Nigeria especially, among those living in the South-East. This work studied the conditions necessary for the growth of this mushroom and its insect pests. Time of insect pest infestation and its abundance in the growing environment, was also examined. Top soil was used as substrate while the sclerotium was bought from Eke-Awka market, Awka. After planting the sclerotia into the substrates, they were placed in five different locations namely: under tree (A), inside laboratory (B), shaded area (C), inside cupboard (D) and under sun (E). The substrates were monitored for emergence of sporophores and the different stages of pest infestation. The following insect pests; Alphitobius sp., larvae of Alphitobius sp.; larvae of Bradysia sp.; Staphlinus sp. and Scaphisoma sp. were observed to be associated with the growth of Pleurotus tuber-regium in Awka, Anambra State. The insect pests attacked the sporophore from the sixth day after emergence. The fruit bodies observed for 10 days revealed that P. tuberregium gave highest primordial length increase (1.41±0.01cm to 10.80±0.01cm ) in Location D and lowest (4.90±0.00cm to 7.10±0.00cm) in Location A. Result of the percentage occurrence of insects revealed that the larvae of Bradysia sp. gave highest occurrence in Location B (15.38±0.00 %). In comparison between locations, the occurrence of insects was higher in Location A (16.92±11.41%). The result revealed that of the entire insect pest that attacked P. tuber-regium in this study, Alphitobius sp. and its larvae caused the most significant damage to the mushroom body. The study showed that, the occurrence, abundance, severity and activity of these mushroom insect pests are dependent on the environment of the mushroom.

Introduction
Mushroom, called “Elo” in Igbo language of Nigeria is a fleshy, spore bearing fruiting body, typically grown above the ground on soil or in its food sources [1]. Most mushrooms belong to the phylum Basidiomycota that have a stem (stipe), a cap (pileus) and gills (lamellae) on the other side of the cap [2]. It is a macrofungus with a distinctive fruiting body which can be either epigeous or hypogeous and large enough to be seen with the naked eye [3]. In Anambra State, indigenes gave several reasons for mushroom consumption which include; for medicinal purposes, as substitute for meat, soup thickening, nutritional values and palatable taste (Okigbo and Nwatu, 2012) [4].

Mushrooms like other cultivated vegetable crops are subject to attack by pests and pathogens [5]. A pathogen is anything that can produce disease. Typically, the term is used to describe an infectious agent such as a virus, bacterium, prion, a fungus or even another micro-organism [6]. A pest is any living organism, whether animal, plant or fungus, which is invasive or troublesome to plants, animals, human or human concerns [7]. The major constraint to mushroom production as shown by Onwubuya et al., (2015) [5] is pest infestation (77.7%) and shortage of water (70.5%).

Aim of this work therefore, is to identify the pests and pathogen that hinder the successful cultivation of Pleurotus tuber-regium in Awka Anambra State, Nigeria. The objective also is to monitor the growth stages to know the pest infestation at each stage

The work was done in two parts. The first involved growing sporophores from P. tuber-regium sclerotia, while the second part dealt with monitoring the mushrooms at different stages for pest infestation. This experiment was carried out within the premises of the Department of Botany Laboratory, Nnamdi Azikiwe University, Awka.

The sclerotia were prepared for planting by adopting the method of Oghenekaro et al., (2008) and Okigbo et al., (2015) [8,9]. The experiment was closely observed for sporulation of the sclerotia and then watered twice daily (9am and 4pm) with clean tap water (20ml) to ensure that the environment was kept humid. Recording commenced twenty days later when primordial formation started.

The mushroom yield was determined using the following parameters as measured with centimeter rule.

Measured by placing centimeter rule from the base of stipes to its pileus.

Measured by placing centimeter rule from one edge of the pileus across the stipe to the other edge.

Measured by tying a thread gently round the stipe in a firm way, then stretch it on centimeter rule to take readings.

The following parameters; insect type, abundance/population and its character(s) were recorded. They were removed from the mushroom samples by hand picking method and preserved in 4% formalin [10]. Traits of captured insects were compared with what is already written in literature [11]. This was confirmed by Prof. N. J. Okonkwo of Crop Science Department, Nnamdi Azikiwe University Awka.

The mushroom were harvested eleven days after primordial emergence by placing one of the index fingers on the surface of the substrate (to prevent the entire sclerotia from coming out with sporophore) and with the other hand holding the base of the stipe, the sporophore is twisted and pulled out from sclerotia within the substrate. The sporophore was taken into the Laboratory for recording of their parameters like: fresh and dry weight, height of mushroom, insect type, among others.

The data collected were subjected to Analysis of Variance (ANOVA) using general linear model option SAS. Test of significance was determined by Duncan’s multiple range test at 5% level of probability.

Table 1: Percentage occurrence of green mould disease in the locations 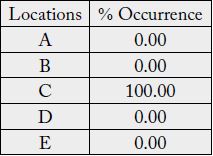 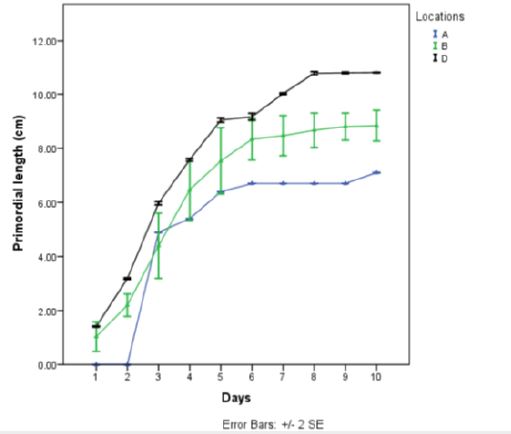 Table 4: Population of insects on Pleurotus tuber-regium at harvest 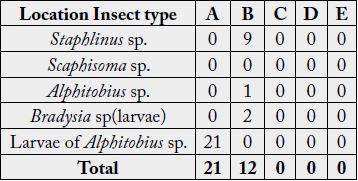 Discussion
Pleurotus tuber-regium was cultivated in five different locations for production of fruit bodies and monitoring the sporophores at different stages for pest infestation. Only three of the locations produced sporophores. The substrates placed in front of the Botany Laboratory (location C) did not produce because of the presence of green mould (Table 1). This is in line with the work done by Sharma et al., (2007) [12], which showed that presence of green mold hinders production of sporophores. Those grown under direct sunlight (location E) failed to produce sporophore, probably due to the dry weather condition, as they were placed in the open, directly under the sun. This concurs with the findings of Onwubuya et al., (2015) [5] where he reported that lack of water is a constraint to mushroom production. The identified insects include: Staphylinus sp, Alphitobius sp, Bradysia sp (Fungus gnats), and Scaphisoma sp., (Table 2). This agrees with previous findings (Ajayi and Jonathan, 2004; Fasidi et al, 2008) [13,14] where it was observed that mushroom flies - sciarids, cecids and phorids enter the mushroom house and breed on the substrate during cropping period.

Scaphisoma sp. was the highest occurring insect pest on mushrooms produced under Citrus sp. tree (Table 2). This can be as a result of the mushroom growing in the midst of other grasses and plants like Citrus sp., Panicum maximum, Chromolenae odorata among others. This arthropod might have invaded the mushroom fruit body from the nearby grasses. Larvae of Bradysia sp occurred more on sporophores produced inside the laboratory (Table 5). This may be because, the substrate is always wet and the larva lives in such condition as observed by Singh and Sharma, (2016) [15]. The larvae of Alphitobius sp. gave highest abundance in mushrooms produced under Citrus Sp. tree (Table 3). There number kept multiplying daily as the egg laid by the adult within the gills of the mushroom continues to hatch.

Comparing the two locations that had insect pest infestation (Table 4), it can be said that similar insect pest attack the mushrooms irrespective of the location. However, the abundance and severity of the insect pests is determined by the mushroom environment (Table 3). At harvest, those grown in the laboratory, gave the highest yield in terms of cap diameter, stipe girth, fresh weight and dry weight while those grown under Citrus sp. tree gave the lowest yield in same parameters (Table 5). The high yield from those grown in the laboratory may be because the insect pests gained entry into the mushroom few days to its harvest. Consequently, the mushrooms were not damaged to a great extent by these insect pests. The low yield from mushrooms produced under Citrus Sp. tree may be due to the infestation of the larvae of Alphitobius sp. which ate the produce sporophores.. They feed, on the fruit bodies, starting from the gills downward to the stipe. These insect pest therefore, might have reduced the yield of mushrooms produced under Citrus Sp. tree which concurs with the report of Onwubuya et al., (2015) [5], that pest affect mushroom yield adversely.

At harvest only the Larvae of Alphitobius sp. was seen on mushrooms produced under Citrus Sp. tree while Staphlinus sp., Alphitobius sp. and Larvae of Bradysia sp were found on the ones cultivated inside the laboratory (Table 5). This is likely because the Larvae of Alphitobius sp. found on mushrooms grown under Citrus sp. tree is very active and being numerous, they seem to eat everything on their path even as they increase in number. They are seen to dominate the gills and start their activity from there. Some eat upwards to the cap and others eat downward to the stipe. If not for anything, their number and active nature can drive away other insect pest that stands on their way [16].

Conclusion
Sporophores of Pleurotus tuber-regium was grown from its sclerotia using soil as substrate. The experiment, carried out in Awka, was targeted at identifying the pests and pathogens of cultivated P. tuber-regium in the area. It was observed that most of these insect pests live and breed under the mushroom cap. Only one was seen to live on the substrate. The following insect pests: Alphitobius sp. and its larvae; larvae of Bradysia sp; Staphlinus sp. and Scaphisoma sp. were seen to be associated with the cultivation of Pleurotus tuber-regium in Awka Anambra State. All of them devalue the mushroom in one way or the other. However, the larvae of Alphitobius sp. was more abundant on those cultivated under the Citrus sp. while Staphlinus sp. was more abundant on those grown inside the laboratory. Also, Alphitobius sp. and its larvae caused the most significant damage to the mushroom body. Meanwhile, the occurrence, abundance, severity and activity of these mushroom insect pests are dependent on the environment of the mushroom.

It is recommended that strategies should be put in place to combat these pests, especially Alphitobius sp. and its larvae. Fruit bodies should be harvested before development of cap or when the primodia is 4 days old. Secondly, to avoid losing the whole crop (matured mushroom), once Alphitobius sp. is seen moving on or around the mushroom fruit-body, then harvest at most the next two to three days (5 to 6 days after emergence). Moreover, cultivation can also be done strictly in an enclosure / cupboard.