Copyright © 2020 Dr. Asdren Zajmi, et al. This is an open access article distributed under the Creative Commons Attribution License, which permits unrestricted use, distribution, and reproduction in any medium, provided the original work is properly cited.

Resistant to many antibiotics, microorganisms have developed tremendous clinical problems in the treatment of infectious diseases. This study intends to identify the presence in the larval of Lucilia sericata of antibacterial properties. In order to achieve the objective, the body of the insect larval was injured by a sterile needle and larval extracts were prepared in three different pH, namely acidic (pH 5.0), neutral (pH 7.0) and alkaline (pH 8.0) buffers or water. The extracts were used to investigate antibacterial activities against four types of bacteria by disc diffusion assay as well as both minimum inhibitory and minimum bactericidal concentration. The three extracts showed inhibition against all bacteria including gram-positive, Bacillus spp and Staphylococcus aureus and gram-negative bacteria, Escherichia coli and Pseudomonas aeruginosa. Out of the three extracts, the pH 5 (C) extract showed the highest inhibition against all of the bacteria, followed by the alkaline (pH 8) extract and the neutral (pH 7) extract. The Minimum Inhibitory Concentration (MIC) showed that the bacteria were still growing at pH 7 and pH 8, thus the dose of larval should be raised to greater than 400mg/mL. The difference between the MIC and MBC of Bacillus spp is 3.13mg/mL and 50mg/mL, respectively. The MIC of S. aureus is 3.13mg/ mL whereas the MBC is 6.25mg/mL. Meanwhile, the MIC of E. coli began at a concentration of 6.25mg/mL, and the MBC at 25mg/mL. For Pseudomonas aeruginosa, both the MIC and MBC are in same concentration of 1.56mg/mL. The pH levels tested for the larval extracts showed antibacterial activities against both gram-positive and gram-negative bacteria. Besides, larval extracts showed higher antibacterial activities against Gram-positive bacteria compared to gram-negative bacteria.

Introduction
The larvae of the common green bottle Lucilia sericata are considered to be medicinal maggots or wound maggots because they are used to treat the wounds as a part of traditional medicine [1] and are in the family blowfly (Calliphoridae). It is a well-known to be the lucrative option to treat chronic, non-healing, wounds, e.g. diabetic ulcers [2-4]. This technique has often been called maggot therapy. The therapeutic effects include necrotic tissue removal (debridging), healing and wound disinfection improvement [5,6]. The wound disinfection properly was attributed to antimicrobial components such as Defensin-like Lucifensin [7,8] and a recently reported antimicrobial peptides AMPs with a convincing antifungal activity called Lucimycin [9,10] in larval secrestions, including small molecules with antibacterial activity [11,12] and AMPs (ACA). The ability of sericata larvae to live in body and necrotic wounds means that they are suitable for the colonization of contaminated environments by, for example, transmitting a diverse range of AMPs to protect them from microbes [13,14]. This theory is supported by the remarkable capacity to live in highly contaminated aquatic conditions such as liquid waste storage tanks and cesspools, the larvae in the drone fly Eristalis tenax [15]. Similarly, it was found that a wide range of AMPs is also given by the burying beetle Nicrophorus vespilloides, which lives and reproduces on cadavers [16,17]. The synthesis of different AMPs also offers the possibility for useful combinatory interactions, such as additional antimicrobial effects, synergy (greater than additive effects), or potentialation (one AMP that activates or enhances other’s activity). AMP gene diversification, which is often repeated at functional level by duplicating and sequence divergence, thereby defending against a wider microbes’ range [18]. Therefore, the aim of this study is to determine the nature of antibacterial activity exhibited by larval extracts of Lucilia sericata against Gram-positive and Gram-negative bacteria.

Lucilia sericata blowflies were obtained by leaving the carrion such as fish or chicken meat for less than 12 hours. The mesh cage containing carrion and raw meat is located at laystall at Prima U1 Section 13, Shah Alam Selangor. The flies enter and attach on the carrion through the open surface of the cage. The chicken meat remains in the cage for oviposition. Rat pallets also can use for the oviposition process. Lucilia sericata blowflies were placed into mesh cage for the rear with under control conditions such as 25º C, 16:8 h light-dark cycle, constant relative humidity, continuous supply of water and sugar as feeding them [19].

Larval were transferred to a 15mL sterile tube containing phosphate buffer saline. The larval then incubated in a test tube in dark at room temperature (25º C) for 60 minutes. ES of larval was transferred to another tube using the pipette and the resultant larval was autoclaved for 20 minutes at 121º C. ES was cooled at room temperature. Remaining ES stored at -20º C used for pH test.

Larval of Lucilia sericata was collected from the raw meat and rat pallet placed in the mesh cage. First, collected larvae were rinsed in tap water before rinsed in distilled water in a sieve. Next, washed larvae were anesthetized by placing them on ice for 5 min. The anesthetized larvae were injured with a sterile needle. As inducing antimicrobial activity, one prick per animal was used. Larvae were homogenized separately about 2gm in 5mL of distilled water as A, 0.1M phosphate buffer pH 5.0 as B and 0.1M sodium acetate buffer as C for 10 min in test tube keeping it at 4º C. The homogenates were then centrifuged at 6 000 rpm for 30 min. The supernatant was collected and stored at -20º C until use [20].

The antibacterial activity was identified by the disc diffusion method against both Gram-positive and Gram-negative organisms included Bacillus spp and Staphylococcus aureus (S. aureus) for Gram-positive bacteria meanwhile Escheria coli (E. coli) and Pseudomonas spp for Gram-negative bacteria. The filter paper disc of 5 mm in diameter was impregnated with 30μL/disc of larvae extracts before placed them on 10mL Mueller-Hinton agar plates previously inoculated with tested bacteria. The plates were incubated at 37°C for 24h. The antibacterial activities were measured from the radial zone of inhibition of bacterial growth expressed in mm around the sample. Tetracycline was used as a standard dose of 10μL/disc as a positive control for Gram-positive and Gram-negative bacteria respectively. The disc diffusion test was carried out in triplicate [20].

The microtiter plate was prepared for Bacillus spp, Staphylococcus aureus, and Escherichia coli and Pseudomonas aeruginosa broth dilution test. A stock solution of the antibacterial agent was prepared about 400μg/mL to dilute the initial concentration which will be 200μg/mL. 300μL of 400mg/mL of stock solution was placed into first well. 150μL of Nutrient broth was placed into second until twelve each well. Triple-fold dilution of the antibacterial agent was made by transferring 150μL of the stock solution from the first well to the second well. The serial dilution was continuous until the entire range is covered. The tenth well concentration is 1.56μg/mL and does not add to the eleventh and twelfth tube as it acts as positive and negative control respectively. 10μL of bacteria suspension was added to each dilution and positive control well. The microtiter plate was incubated overnight at 37º C. From the first well that shows no turbidity was taken and inoculated by streaking in a nutrient agar plate. Next, incubated the plates overnight at 37º C. The lowest concentration giving no growth on subculture was recorded as minimum bacterial concentration (MBC).

Results and Discussion
In natural habitats, fly maggots or larval has to compete for microorganisms such as fungi and bacteria as food substrate. The substrate being subjected to preliminary treatment with enzyme due to presence of extraintestinal digestion in larval’s system [21]. Larval’s exosecretion containing antimicrobial compounds because a few of insect species and vertebrates able to release antimicrobial peptides onto mucosa surface [19].

Figure 1 shows the species of flies collected in which are identified as Lucilia sericata due to presence of number of para vertical setulae or occipital bristles is 2+2, width of the frontal stripe twice as wide as a para frontal plate, color of the frontoclypeal membrane is light brown, number of setulae on ‘quadrat’ between discal setae and anterior margin of scutellum 35-55 and number of hairs on the posterior slope of the humeral callus behind the basal setae 6-8. The compound found as an antibacterial factor called phenylacetaldehyde according to pH meter test shows pH 7.8. All extracts show the antibacterial activities against both Gram-positive and Gram-negative bacteria, as shown in Table 1. Based on the result obtained according to disc diffusion test, pH 5 (C) has the greatest zone of inhibition against Gram-positive bacteria, Bacillus spp (21mm), Staphylococcus aureus (34mm) and Gram-negative bacteria, Escherichia coli (12mm), Pseudomonas spp (22mm). Extract of pH8 (B) shows inhibition zone 7mm of Bacillus spp, 11mm of Staphylococcus aureus, 7mm of Escherichia coli and 9 mm of Pseudomonas spp. Differ in the extraction of pH 7 (A) exhibits the lowest inhibition zone against Bacillus spp by 9mm, Staphylococcus aureus by 10mm, Escherichia coli by 10mm and Pseudomonas aeruginosa by 6mm. According to the disc diffusion result extract C show, low inhibition zone against Gram-negative bacteria compared to Gram-positive bacteria due to present of membrane around cell wall increased risk of toxicity to host, porin channel present can prevent entry of harmful chemicals and antibiotics as well as can expel out antibiotics, risk of resistance against antibiotics due to presence of external covering around cell wall and possess both exotoxins and endotoxins. 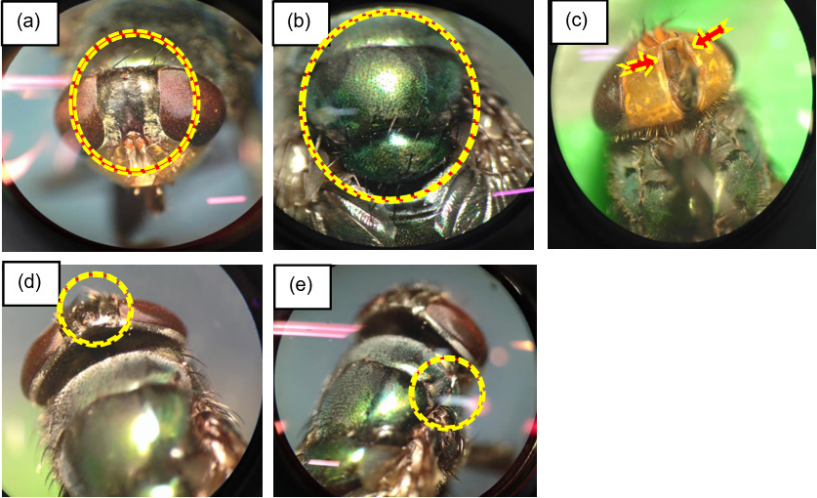 The results of the study were consistent with previous studies that show larval extract of Musca domestica (House fly) was able to provide highest inhibition zone at pH 5 followed by pH 7 and pH 8 respectively [22].

Acknowledgements
We would like to extend our appreciation and gratitude to Management and Science University for the Seed Grant (FL001E-13B10) for providing a grant to conduct the study.

Conflicts of Interests
The authors have no conflict of interests