Evaluation of Knowledge, Attitude and Use of Antibiotics Among Pharmacy Students in UAE

Copyright © 2020 Dr. Suleiman Ibrahim Sharif, et al. This is an open access article distributed under the Creative Commons Attribution License, which permits unrestricted use, distribution, and reproduction in any medium, provided the original work is properly cited.

The problem of bacterial resistance is worsened by the irresponsible utilization of antibiotics.

The present study aims at evaluating the knowledge of pharmacy students about various aspects of antibiotics’ storage and use and bacterial resistance.

This is an anonymous questionnaire- based cross-sectional study. The survey was designed with close ended questions and pre-piloted for face validity by distributing it to pharmacy students of at the University of Sharjah-United Arab Emirates. The survey was distributed to a total of 264 students. The data was analyzed using SPSS version 20 and chi square test was used to determine the level of significance of responses at p< 0.05.

The response rate was 91.3% with the majority (198, 82.2%) of respondents being females, Arabs (230, 95.4%) and with parents of non-health care profession (182, 75.5%). About two thirds students have had used antibiotics in the last year and they read the instruction leaflet. High percentages of all students use antibiotics for fever, colds and sore throat, keep leftover antibiotics and use them without medical consultations. More senior than junior students know that misuse can lead to resistance and antibiotics are effective against bacteria but not viruses.

Senior students seem to have a higher but not ideal level of knowledge of antibiotics and bacterial resistance than junior students. It is of importance to focus on interventions that enhance educational courses for pharmacy as well as students of other colleges of health sciences as future health care providers in addition to continuing educational programs for practicing health professionals.

Introduction
Antibiotic medications are widely applied in the treatment and prevention of infections. They may either kill or inhibit the growth of bacteria; however, a major problem is arising that represents one of the biggest threats to global health. This is attributed to self-medication and irrational use of antibiotic [1]. The problem of resistance is worsened by the irresponsible practice of taking antibiotic without the advice of a physician and also the use of leftover medicines stored at home and sharing antibiotics with family members [2]. It has been argued that the prevalence rates of antibiotic use without prescriptions in UAE are considered high and are due to the lack of enforcement of laws and regulations which would otherwise prohibit this practice [3].

Irrational use will certainly lead to antibiotic resistance which can affect any one, of any age, in any country [4,5]. Emergence of resistant strains of microorganisms occurs when bacteria changes to protect itself from antibiotics [6]. It occurs naturally, but misuse of antibiotics in humans accelerates the process of emergence of resistant bacterial strains and the problem is enhanced by easy access to antibiotics. The problem although cannot be prevented, it can be tremendously reduced [7]. Several practices represent misuse of antibiotics such as unnecessary over-prescribing, under prescribing, patients not finishing the entire antibiotic course, overuse of antibiotics in livestock and fish farming, poor infection control in health care settings, poor hygiene and sanitation, unnecessary antibiotic prescribing, the slow progress in developing new antibiotics, antibiotic prescribing for non-bacterial infections, patient demands on physicians to prescribe antibiotics and self-prescribing. However, inappropriate prescribing of antibiotics by the physicians is the most important recognized factor [8]. Moreover, lack of awareness on rational use and self-medication with antibiotics has also been identified as major factors for the development of antibiotic resistance [9]. Antibiotic use is highly prevalent, with statistics [10] estimating a 66% global rate of antibiotic use. Purchase of antibiotics without a prescription is estimated to count for 50% world-wide [11]. Considering the importance of this health issue, the present study was carried out to evaluate the knowledge, attitude and practice of pharmacy students about rational antibiotic use and emergence of bacterial resistance.

This study was conducted at the College of Pharmacy, University of Sharjah during the period 1st April to 30th June, 2019.

An anonymous cross sectional questionnaire was designed with close ended questions and pre-piloted for face validity by distributing it to 2 students of each study year. The comments and recommendations of the students were considered in the final version of the questionnaire; however, their responses were not included in the results. The study was carried out during April-June, 2019. The survey was distributed to a total of 264 students at the end of their classes and 2 researchers explained the purpose of the study and upon completion of filling the questionnaire collected the surveys. The average time to complete the survey was 20 minutes. The students were informed that their voluntarily participation and filling the questionnaire will be considered a form of an informed consent. The questionnaire was divided into four sections, the first include questions with regard to demographic characteristics of the participants namely gender, ethnicity, year of study and parents’ profession.

Data analysis was encoded on excel sheet and descriptive statistics were calculated by using SPSS (version 20). The data were summarized as frequencies and percentages. Comparison of responses of the three groups of students and significant association between demographic characteristics of the participants and their responses was determined at a level of significance set at p-value < 0.05.

The questionnaire was distributed to 264 students and a total of 241 completely filled in surveys were received back producing a response rate of 91.3%. Table 1 shows that the majority (198, 82.2%) of respondents were females, Arabs (230, 95.4%) and with parents of non-health care profession (182, 75.5%). Parents of the rest of the participants were of health care professions.

Table 1: Demographic characteristics of the respondents

About two thirds (60-67%) of all students had used antibiotics in the last 12 months and they read the instruction leaflet before using antibiotics (Table 2). Also shown in the same table that significantly (p < 0.02) more fifth (57, 80.3%) than first (56, 59.6%) and third (49, 64.5%) year students finish the course of antibiotic, while more (p < 0.001) of both the advanced than the first year students do not stop the antibiotic once they feel better and do not take antibiotics prophylactically to protect against diseases (p < 0.03).

Table 2: Responses of students to questions on use of antibiotics 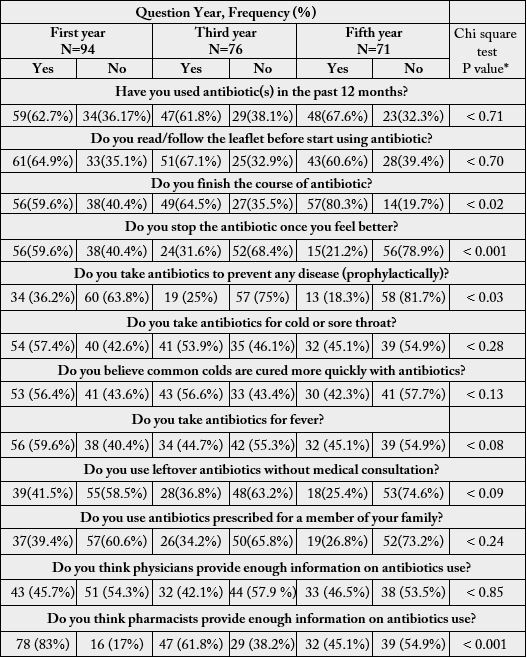 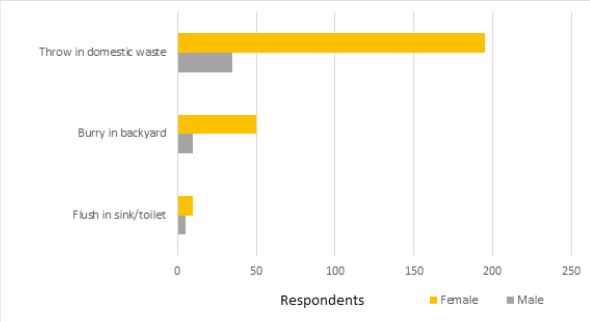 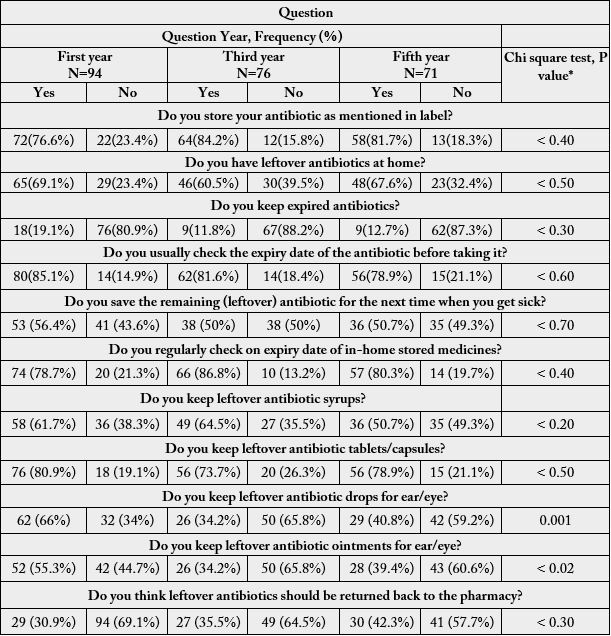 Table 4: Responses of students to questions on effectiveness and resistance to antibiotics

With the exception of gender, no significant association was observed between other demographics and students’ responses to various questions. Results of the influence of gender on some aspects of knowledge of students on antibiotics are shown in Table 5. More male than female students know what is meant by bacterial resistance (p< 0.05), know that antibiotics are effective against bacteria (p <0.02), do not use antibiotics prophylactically (p< 0.05) and have a home pharmacy to store medications (p<0.01).

Table 5: Influence of gender on some aspects of knowledge of antibiotics 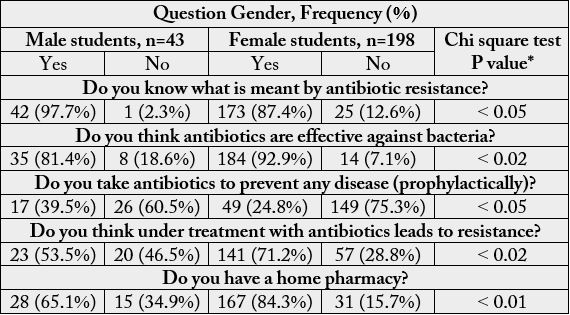 Discussions
This study surveyed pharmacy students at the university of Sharjah-UAE to assess their knowledge, attitude and use of antibiotics. The latter is progressively increasing in the country [12]. Among other factors that enhance the emergence of resistant bacterial strains are under- and over- treatment with and the irrational use of antibiotics in humans and animals [13]. The problem has recently been an alarming global concern. The high prevalence of self-medication with antibiotics in UAE significantly contributes to bacterial resistance [5]. The issue is aggravated by lack of knowledge and misconceptions on antibiotics. Most (82.2%) of the participants were females. This reflects the common trend in colleges of health sciences in the UAE. About two thirds of each group used antibiotics in the last 12 months. Knowledge of fifth year students although better than that of third or first year, but in general seems poor when considering responses of the entire groups of students that considered antibiotics to be effective in common cold, sore throat and fever which are mostly due to viral infection. Such misconceptions are illustrated in 40-60% of the three study groups. This result is in accordance with the observations in Malaysian and Chinese adults [14,15] but higher than those for Saudi patients [16]. Results of the present study also indicated that significantly more fifth than first or third year students finish their course of antibiotics and do not stop it once they feel better. Our results also indicated that almost all third and fifth year know what is meant by bacterial resistance, are aware that misuse of the drugs lead to bacterial resistance, that antibiotics are effective against bacteria but not viruses and the problem of resistance is a global one as compared to first year students. However, only about two thirds of each group were aware that poor drug quality and under treatment with antibiotics can lead to resistance, while significantly more fifth and third year students than first year believed that over treatment can also lead to resistance. Such behavior of advanced year students may be expected as at the level of their study they gain reasonable level of knowledge through their pharmacology and microbiology courses. Only small percentage of each group keep expired antibiotics at home. Such practice should not be encouraged as the intentional or non-intentional use of expired medicines may lead to resistance as well as worsening of the condition for which they are used. This is may be even worsened by the fact that 50% and more of each group keep various formulations of leftover antibiotics for future use including syrups, ear/eye ointment and drops which should be disposed of once the course of treatment is finished.

It has indeed been shown that sore throat; tonsillitis and similar conditions were frequently the causes of self-medicating with left over antibiotics [17-19]. It is worth noting that studies in medical students with low rates of antibiotic use, demonstrated that their consumption was irresponsible reflecting that their knowledge was not in harmony of their behavior [20]. When asked about duration of antibiotic use, more females than males selected 1-7 days, while almost similar but small numbers of both groups selected 1-14 days and very few males selected 1-21 days. Moreover, high percentages, about two thirds, of the three groups do not favor returning leftover antibiotics to pharmacy and more of both males and females throw expired antibiotics in domestic waste. In addition, studying the influence of gender on some aspects of knowledge of antibiotics, resistance and availability of home pharmacy indicated a significant association between gender and these aspects. Significantly more female than male students know the meaning of bacterial resistance, know that antibiotics are effective against bacteria, believe that under treatment with antibiotics can lead to bacterial resistance and have home pharmacy. On the other hand more male than female students know the meaning of bacterial resistance and use antibiotics prophylactically,

Results of the present study indicate that although students of advanced (third and fifth) years of study may have more knowledge of aspects of antibiotic use and bacterial resistance, there are gaps in such a knowledge and serious misconceptions when it comes to storage of left over and expired antibiotics and their use without medical consultation.

Conclusion and Recommendations
Since all health authorities are aware of the seriousness of the global problem of the irrational use of antibiotics and the emergence of bacterial resistance, it is rather imperative to suggest that intensive focus should be directed on educational courses and programs directed to university students. Focus on students of health sciences colleges including medical, dental, pharmacy, nursing and other health related specialties would certainly equip them with more knowledge and skills to educate the public as future health care provider. Also continuing education programs stressing on responsible use of antibiotics should target all health care professionals.

Limitations
The present study focused on pharmacy students of only one university in UAE, therefore the results cannot be generalized.