Determinants of Overweight and Obesity Among Saudi Women of Childbearing

Copyright © 2020 Dr. Khalid S. Aljabri, et al. This is an open access article distributed under the Creative Commons Attribution License, which permits unrestricted use, distribution, and reproduction in any medium, provided the original work is properly cited.

The frequency of overweight and obesity among women of childbearing age is high and considered as a critical public health concern.

Introduction
For both the developing and developed nations, the increase in worldwide overweight and obesity rates was a major public health epidemic [1]. Several risk factors could attribute to body weight including behavior, environment, genes, metabolism and socioeconomic status [2-4]. Overweight and obesity are defined as abnormal or excessive fat accumulation in the fat tissues of the body which are measured by a body mass index (BMI) [5-7]. It is well established that obesity is associated with hypertension, diabetes mellitus and cardiovascular disease [8].

The prevalence of obesity and overweight in Saudi Arabia has been reported to be high in Saudi females [18-25]. Research indicates that a woman who is overweight or obese before she becomes pregnant also has a higher risk of complications during her pregnancy and higher prevalence of health problems for her children.

Statistical Analysis
Univariate analysis of demographic and clinical laboratory was accomplished using unpaired t-test between variables, to estimate the significance of different between groups where appropriate. Chi square (X2) test were used for categorical data comparison. Pearson correlation was used for correlation between variables All statistical analyses were performed using SPSS Version 23.0. The difference between groups was considered significant when P<0.05. 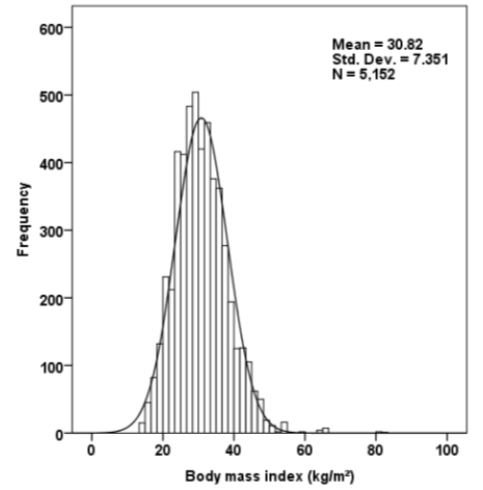 BMI within age groups are skewed positively with a skewness respectively for each age group, Figure 2. The results show that the values of the mean, median and mode are very close to each other suggesting normal Gaussian distribution as shown by the histograms. With an increase in age, BMI showed a gradual increase, Figure 3 and 4. The correlation coefficient (r) and P value between age and BMI was r = 0.337, P<0.0001, Figure 5. 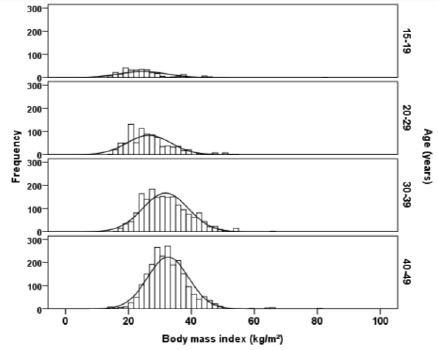 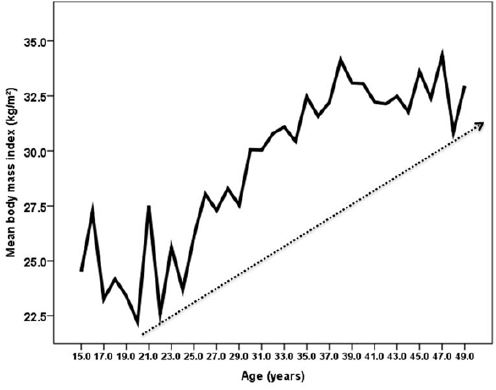 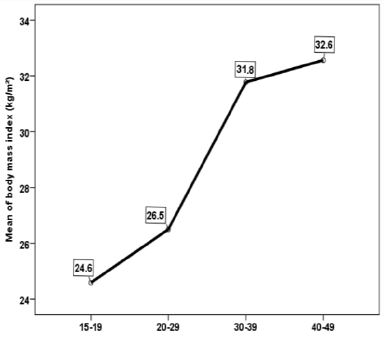 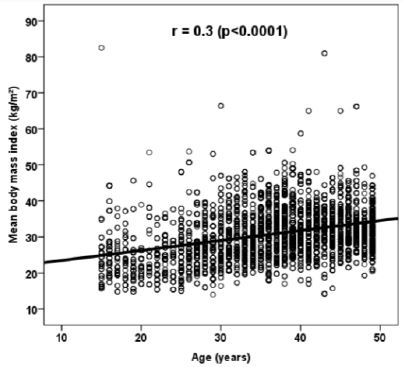 Discussion
Worldwide, 30% of the world’s population are either overweight or obese [28]. Obesity is the most common nutritional disorder in developed countries and is becoming significant in developing countries, and more women in the fertile ages become overweight and obese. Obese women have higher risks of complications during pregnancy [29,30]. Obesity in women of reproductive age was found in 25% of cases. In the United States, obesity affects more than one third of the population and thus threatens the health of the nation including diabetes, heart disease [31,32]. In 2014, WHO found that about 15% and 40% of women in developing countries were either obese or overweight respectively [28]. In addition, the Health Survey for England found that obesity increased in women from 16% in 1993 to 26% in 2011 [33]. obesity may be regarded as an epidemic in Saudi adults like the developed countries of the world. Because of women’s childbearing role, obesity in female has greater epidemiological importance than in male [34]. Females of childbearing age are at especially high risk because of the increased health risks of pregnancy complications and birth defects [35]. In our study, we randomly recruited adult Saudi females of childbearing age. We demonstrated that the frequency distribution histogram of BMI shows normal Gaussian distribution with skewness of 0.706 and kurtosis of 1.955. When the females are grouped into different age groups, an increase in BMI found from 24.6±7.4 in the 15-19 y group to 32.6±6.5 in the 40-49 years age group. The correlation coefficient is high and a statistically significant positive correlation between age and BMI is found (r = - 0.337, P<0.0001). These findings confirm other report that show that BMI increases with age in reports of Saudis and others [36-46].

Clinical decision-making is driven in part by the prevalence of the condition in the general population. Obesity is considered to be a lifestyle disease, a result of modern living which has led to the creation of an obesogenic environment [49]. The need for effective weight management strategies is described in the mass media as well as in the healthcare literature [50]. In spite of public awareness of nutrition and fitness, of educational initiatives, and of the regulation of food marketing and other strategies, obesity continues to be a significant health risk for female Saudis. The impact of this health problem is described in terms of significant morbidity and mortality to childbearing-age women [51]. Childbearing-age women are a priority population for weight management initiatives because not only does maternal obesity affects the mother’s health, it is associated with delivery complications and complications with the child’s health, including a higher rate of birth defects [51].

The barriers, attitudes and motivators that affect weight management of childbearing age women are important to understand when considering measures to improve weight management of this high risk group [35,52,53]. These Saudi females present an ideal group for implementation of awareness programs as they can apply this information to prevent obesity development in themselves, their family members and their children.

This paper has provided evidence to the high frequency overweight and obesity amongst non- pregnant women of child bearing age resident in a sample size of our population exist. Results of our investigation must be interpreted in light of some limitations such as the cross-sectional design, which does not let to establish any causal relation with respect to obesity state and only provides mere associations. Considering the goal population, a larger cohort would have probably provided a greater power of the statistical analyses.

Conclusion
The frequency of overweight and obesity among women of childbearing age remains a critical public health concern. Clearly, despite the small sample size, this study has posed important public health issues that require immediate attention from the health authority. Unless immediate steps are taken to contain the increasing prevalence of obesity, the health care costs for chronic diseases will pose an enormous financial burden to the country.

Acknowledgments
We are grateful to the staffs of the endocrinology department at King Fahad Armed Forces Hospital for their valuable contributions in data collection. The authors have no conflict of interest to disclose.