Prevalence and Correlates of Dental Caries in an Elderly Population in Southern Vietnam: A Cross-Sectional Study

Copyright © 2019 Dr. Duong Duc, M., et al. This is an open access article distributed under the Creative Commons Attribution License, which permits unrestricted use, distribution, and reproduction in any medium, provided the original work is properly cited.

The present study aimed to investigate the prevalence and association of some socio-demographic variables with dental caries amongst elderly people in a Southern province (Binh Duong) in Vietnam.

Dental caries and low filling rate in the elderly population was a common disease in Southern Vietnam despite a decreasing trend of the disease. Our findings could represent the oral health status amongst elderly people in peri-urban areas in Southern Vietnam.

Introduction
Aging is a natural and inevitable phenomenon. Elderly population people (elders above 60 years) are at higher risk of for many health problems as a consequence of aging. Amongst those, maintaining oral health is considered to be an important contributing factor to health in elderly. Dental caries is one of the major oral health diseases amongst elderly people [1] with a prevalence rate ranging from a half to three-fourths [2-4]. Acquiring dental caries limits food choices and diminish the pleasures of eating, thus decreasing general health and health conditions of elderly people. In developing countries, oral health status and oral health service is limited in urban areas. Thus, studies are required to conduct epidemiological research to provide further insights about the current situation of the diseases and conditions, given that oral health amongst elderly people in developing countries should be prioritized [1].

Vietnam, a lower middle-income country in Southeast Asian with about two-thirds of the population living in rural areas [5], is facing with dramatically increase of the elderly population in the last decades [6]. As a result, a dental transition is occurring in Vietnam. Unfortunately, there has little information about the oral health status and its impact to their daily life amongst elderly [7]. A high estimation in an old National Health Study in 1999 presented that the prevalence of caries amongst adults aged ≥ 45 years was about three-fourth [8]. Further, there are insufficient dental health services in Vietnam [8,9] whereas most dental practices are located in urban areas [10]. Producing a large-scale survey could be important contribution to increase oral health awareness in Vietnam. Given that, our cross-sectional study, as part of the first Vietnam national oral health survey in 2016, was to investigate the prevalence and correlates of dental caries in elderly population amongst elderly people in Southern Vietnam.

This cross-sectional study applied a cluster sampling design to recruit 1350 elderly respondents aged 60 or higher years in Binh Duong province, a Southern province in Vietnam. Binh Duong is a peri-urban province with a total area of 2,694 square kilometres. Binh Duong is divided into 5 urban districts and 4 rural districts with about 2.1 million residents as of 2017 [6]. This peri-urban province was chosen because it could provide representive data for both urban and rural population, including the view of the rapid economic and population growth in Southern Vietnam. Then we employed a multistage stratified random sampling technique. First, all the districts were divided into three categories (large, medium, and small districts) based on the size of its population. As per categorization, one district was chosen randomly. For the second stage, ten communes in each of these districts were randomly selected. Finally, from each commune, 45 respondents were randomly selected from sampling frame of elderly people retrieved by the Commune Health Station. Data for this study were collected from late 2015 and early 2016.

After obtaining written consent, a face-to-face interview was conducted for each respondent to collect their demographic data and oral health history. Inclusion criteria were local elderly residents (≥60 years old) with self-care ability and able to communicate. In each commune, we did the interview and dental examination until there had enough 45 respondents. The respondent which refused to participate was replaced by the next one in the sampling frame.

Following the completion of the interview, dental examination was carried out for all respondents. The WHO criteria were employed to assess tooth status (decayed teeth with crown or root caries (DT), missing teeth due to caries (MT), and filled teeth due to caries (FT)) [11]. We also calculated decayed and filled teeth (DFT) (sum of DT and FT) and decayed, missing, and filled teeth (DMFT) index (sum of all the DT, MT, and FT). The prevalence of dental caries was counted as the percentage of respondents who suffered from crown or root caries to the total number of respondents.

For continuous variables, Kolmogorov-Smirnov was applied to test normality. Then, T-test (for normally distributed variables) or Mann-Whitney test (for non-normally distributed variables) was used for comparison analysis. For categorical variables, chi (χ2) square tests or Fisher’s exact test was calculated depending on the expected values of the contigency table [12]. Statistical significance was considered if p-value was <0.05.

To identify the association of demographic variables and dental caries, univariate analysis (Pearson χ2 or Fisher’s test) was conducted. The significant variables were included in the final logistic regression analysis in which the dental caries status was the dependent variable.

This cross-sectional study was approved by the Ethics Committee of the Hanoi Medical University. Ethical guidelines were followed and respondents were recruited after obtaining informed written consent.

Altogether, the final sample consisted of 1350 respondents who completed the face-to-face interviews and then, were examined with dental caries with a mean DFT around 1.06 and DMFT around 13 teeth per person. Among all enrolled participants, 433 had dental caries (32.1%). The following characteristics were predominant: female gender (59.3%), elderly in their 65-74 years (40.2%), living in rural areas (69.8%), having secondary or lower educational level (82.2%), having previous manual work (87.0%), and having income at average or higher level (84.7%). As shown in table 1, a significant higher in the prevalence of dental caries were found in elderly with older age (aged 75 or higher), elderly with higher education level, and elderly who used to be the government officer, and poorer elderly.

Table 1: Background characteristics and its association to the prevalence of dental caries in the elderly people in Binh Duong province, Vietnam 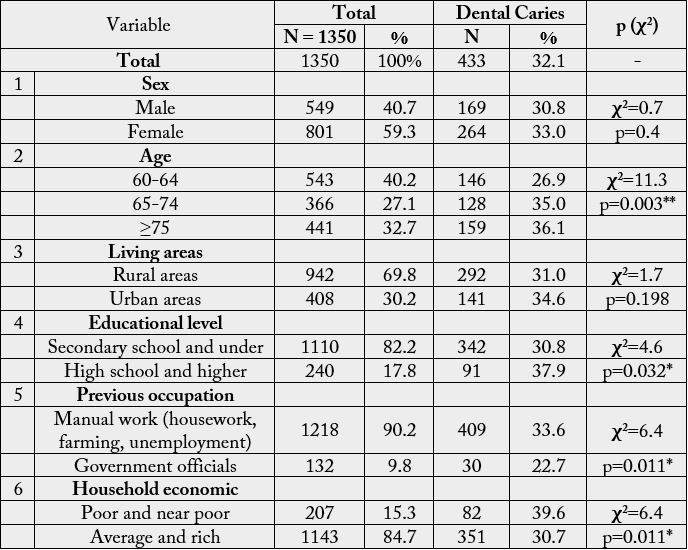 In this survey, we found that the prevalence of dental caries was 32.1%. The finding is lower than the observed prevalence of studies conducted in Southern Vietnam (>60%) in 2010 [9], in other developing countries, such as China (>65%) [4], India (65%) [13], and in developed countries such as Canada (50%) [14]. The DFT and DMFT index is also lower than that reported in adult populations of Western countries [15,16] and other Asian countries [4,13]. These findings indicated that dental caries is still a common but do improve alongside with the economic development. As a large geographic region in Vietnam, Binh Duong is one of the most advanced urban provinces of Southern Vietnam. The economic development is faster than the Nothern Vietnam. The advance in economic growth in turn could result in the improvement of lifestyle, health awareness and behaviors, which might have affected the oral health amongst the elderly. Moreover, the elderly population might have better access to oral health services, including geographical proximity and the availability of transportation (public and private vehicles).

Among all the potential factors, younger age, being a government officer and having higher income were significantly associated with the lower risk of dental caries in the elderly Southern Vietnam. The better socioeconomic condition are strong protector for people to dental caries [8,9]. On the other side, prevalence of dental caries amongst elderly people was not significantly different between urban and rural areas, which is in line with other studies in Vietnam [8,9]. This robust evidences provided by other developing countries suggesting that socioeconomic development support to narrow the differences in prevalence of dental caries between urban and rural areas [4,17]. The socioeconomic development in Binh Duong province could lead to changes in healthy behaviours, such as diet and lifestyle, amongst elderly people in rural areas.

Conclusion
In summary, findings from the current study indicate the common of dental caries and low filling rate in the elderly population in Southern Vietnam. The elderly who were younger age, being a government officer and having higher income were at a lower risk to develop dental caries. The study indicates that oral health education should be strengthened and other measures should be conducted to promote the elderly population’s healthy lifestyles, meet oral health needs, and reduce the incidence of dental caries.