Case Report of an Esophageal Leiomyoma: A Rare Cause of Esophageal Varices

Copyright © 2023 Dr. Osama Helmy, et al. This is an open access article distributed under the Creative Commons Attribution License, which permits unrestricted use, distribution, and reproduction in any medium, provided the original work is properly cited.

Leiomyomas are the most common mesenchymal tumors of the esophagus. They are of benign origin occurring mostly in the lower two-thirds of the esophagus. Symptoms and signs are similar to other esophageal lesions, but they may rarely present with bleeding from esophageal varices such as the case in this report. Upper endoscopy, radiological imaging, and histological studies play important roles in the diagnosis. Enucleation for esophageal leiomyoma is the preferred surgical method.

A previously healthy 65-year-old woman presented with recurrent hematemesis, chronic non-productive cough, and dyspnea on exertion with no hemoptysis, dysphagia, fever, anorexia and weight loss. Upper endoscopy revealed medium esophageal varices, lower esophageal diverticulum, and a hiatal hernia. The chest and abdomen contrast-enhanced computed tomography demonstrated a large lower esophageal mass. Diagnostic thoracoscopy was done and the biopsy of the mass revealed histological features of leiomyoma. The patient is on the waiting list for surgery.

Esophageal leiomyoma can be revealed by hematemesis associated with respiratory symptoms and can be misdiagnosed due to atypical symptoms or atypical imaging features. Recognizing the imaging and pathologic features of esophageal leiomyoma is important for early diagnosis and proper management of such benign lesions.

Introduction
Leiomyomas are the most common mesenchymal tumors of the esophagus. They are of benign origin occurring mostly in the lower two-thirds of the esophagus. Symptoms and signs are similar to other esophageal lesions such as dysphagia, retrosternal chest pain, or regurgitation, but they may rarely present with bleeding from esophageal varices which can be caused by compression of blood vessels at the lower esophagus leading to blockage of blood flow as described in this case report.

Case Report
A 65-year-old female patient presented with recurrent hematemesis, chronic dry cough, and dyspnea on exertion. No chest pain, hemoptysis, abdominal pain, jaundice, abdominal distension, fever, weight loss, or anorexia were reported. Otherwise, the patient was healthy and there was no history of respiratory diseases, including asthma or allergies. She never smoked or drank alcohol. Her drug, family, and social history were unremarkable.

On examination, the vital signs were within normal limits. An abdominal examination showed no tenderness, mass, or ascites. A chest examination showed bilateral vesicular breathing sounds with no crepitations or wheezes. Heart sounds were normal with no murmurs.

Upper endoscopy showed esophageal varices grade 2 (with no red wales), hiatal hernia, and lower esophageal diverticulum (figure 1). However, basic laboratory investigations showed no signs of chronic liver disease or portal hypertension as there was neither anemia nor thrombopenia. In addition, there were no liver abnormalities, no portal vein dilatation, no collateral veins, nor splenomegaly in the abdominal ultrasonography.

Contrast-enhanced computed tomography (CT) revealed the presence of a large soft-tissue mass in the posterior inferior mediastinum, arising from the esophagogastric junction (figure 2). Stippled intralesional calcifications were associated. The descending aorta and esophagus were displaced posteriorly. The esophagus was not dilated and contained small parietal varices. There were no signs of blood vessel invasion nor signs of pleural and pericardial effusion. The patient was discharged and asked to return a week later to present her case to the surgery department but she didn’t attend. 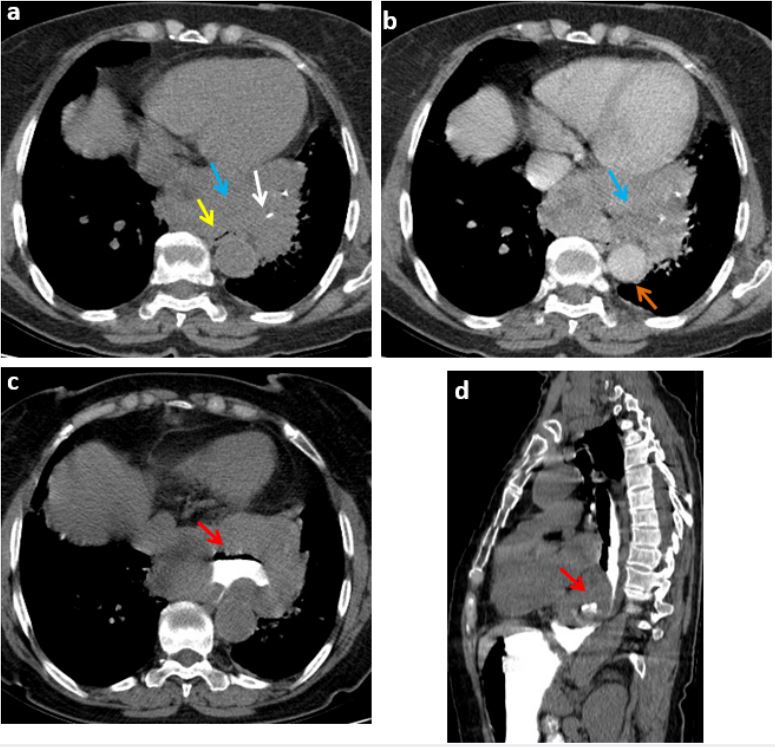 Figure 2: a and b) CT scan in axial plane before and after intravenous contrast media administration showing the esophageal lumen (yellow arrow), the lower esophageal mass (blue arrow), intralesional calcifications (white arrow), and the descending aorta displaced posteriorly (orange arrow). c and d) axial and sagittal oblique planes after Gastrografin swallow showing the hiatal hernia (red arrow) and the mass around it.

Six months later, she presented with the same symptoms and upper endoscopy showed the same findings. A computed tomography scan with gastrografin swallow was performed, showing that there was no progression of the mass nor direct or distant metastasis or invasion of blood vessels. Accordingly, malignant degeneration of the mass was not highly suspected.

Bronchoscopy was performed to eliminate any lung lesions because of the chronic cough. ECG and Echocardiography showed no anomalies.

A diagnostic thoracoscopy was done and revealed a fixed large paraesophageal mediastinal mass.

The biopsy of the lesion revealed fusocellular growth with no signs of malignancy or active mitotic activity. These findings were consistent with esophageal leiomyoma (figure 3).

Discussion
Leiomyomas are the most common benign mesenchymal tumors of the esophagus [1-4]. These tumors originate from smooth muscle cells. It usually occurs between the ages of 20 to 50 years. The lower twothirds of the esophagus is the most typical location of these tumors

Leiomyomas of the esophagus rarely cause symptoms when they are smaller than 5 cm in diameter. Moreover, they rarely grow to be larger than 10 cm, and in this situation they are called giant leiomyoma of the esophagus. These may occur as single or multiple tumors [5,6].

When these tumors grow larger, they become more symptomatic in patients. The most common symptoms are dysphagia, chest pain, vague retrosternal discomfort, heartburn, and occasionally regurgitation. They can rarely cause gastrointestinal bleeding when the tumor erodes through the mucosa. Moreover, it has never been reported that it might present by bleeding from esophageal varices because it is a benign tumor which does not invade blood vessels.

In our case, the esophageal leiomyoma caused probably a blockage of blood flow by compression of blood vessels leading to formation of bleeding esophageal varices which were detected by upper endoscopy but no tumors were visualized. A malignant nature of this mass was less suspected because the patient had a good general status and there was no mass progression within six months in the CT scans or invasion of blood vessels.

Enucleation via thoracotomy or thoracoscopy is the preferred surgical method for the treatment of esophageal leiomyoma, depending on the location and size of the tumor. In contrast, surgery is favored for giant esophageal leiomyoma by esophageal resection and reconstruction [11].

Since malignant degeneration is exceedingly rare [12], surgical treatment of small asymptomatic leiomyomas is controversial, as some authors recommend resection to rule out malignancy, while others advocate for observation [11].

Conclusion
Esophageal leiomyoma is rarely revealed by upper gastrointestinal bleeding from esophageal varices. This presentation can be associated with respiratory symptoms. It can be misdiagnosed due to atypical symptoms or imaging features. Endoscopic and radiologic tests are essential to differentiate esophageal leiomyomas from other esophageal and mediastinal lesions.