Copyright © 2022 Dr. Helmy, O. et al. This is an open access article distributed under the Creative Commons Attribution License, which permits unrestricted use, distribution, and reproduction in any medium, provided the original work is properly cited.

Data on the epidemiology of viral and non viral cirrhosis, especially in African countries, are limited. We compared the epidemiology and clinical characteristics requiring the first hospital admission and causing in-hospital mortality between viral and non viral cirrhosis over the last two years. The identification of patients at higher risk for adverse outcomes can aid in making the clinical decisions that will improve the prognosis for these patients.

We retrospectively examined the datasets of 400 inpatients of Ibn Rochd university hospital in Morocco from November 2019 until March 2022. The study included patients who were admitted due to specific complications of liver cirrhosis. We compared the causes of first hospital admission and in-hospital deaths between patients with viral (hepatitis B virus & hepatitis C virus) and non viral related liver cirrhosis.

The major causes of first admission in viral and non-viral cirrhosis are ascites and variceal bleeding. Variceal bleeding showed the highest percentage among causes of in-hospital mortality in both groups. Adjusted prevention-centered public health measures and early and opportune diagnosis of this disease are needed to prevent the development of complications and to improve outcome in cirrhotic patients.

Introduction
Liver disease, including cirrhosis, is an important cause of mortality in middle east and north Africa and worldwide. It was the eighth leading cause of death in 2015 [1]. Various chronic liver diseases end by liver cirrhosis [2,3]. The common complications of liver cirrhosis are ascites, jaundice, variceal bleeding, spontaneous bacterial peritonitis (SBP), hepatic encephalopathy (HE), hepatocellular carcinoma (HCC) or hepatorenal syndrome(HRS) [4]. This phase of the disease has been designated ‘‘decompensated cirrhosis’’ [5]. In Morocco, viral hepatitis is widely spread making it the leading cause of cirrhosis [6,7].

Despite the global growing economic and public burden of cirrhosis, data on the epidemiology of viral and non viral cirrhosis are extremely limited in Morocco.

The aim of this epidemiological study was to compare the baseline characteristics, recent trends in the first cause of hospital admissions and in-hospital mortality attributable to that cause between patients with viral and non viral related liver cirrhosis in a Moroccan cohort of 400 patients admitted to the hepatology and gastroenterology department of Ibn Rochd university hospital in Casablanca. Accordingly, clinical decisions can be made to improve the prognosis for Moroccan patients who are at higher risk for adverse outcomes.

A retrospective analysis was conducted using the medical record databases of Ibn rochd university hospital in Casablanca, Morocco. Patients who had been hospitalized for the first cirrhosis-related complications including ascites, variceal bleeding, SBP, HE, HRS, portal thrombosis, HCC or acute on chronic liver failure were included. We determined the causes of admission and in-hospital death by reviewing the discharge records. Medical records of 400 hospital admissions (400 patients) were reviewed. The study population comprised 400 patients with decompensated HBV and HCV-related liver cirrhosis or non viral related liver cirrhosis who had been hospitalized for the first time in Ibn Rochd hospital from November 2019 to March 2022. HBV-related liver cirrhosis was recorded on the chart in case of hepatitis B surface antigen had been present. HCV-related liver cirrhosis was documented on the chart in the presence of antibody to HCV and HCV RNA in the serum. Patients with excessive alcohol consumption together with HBV or HCV infection were classified as having liver cirrhosis with a combined cause. NAFLD (Non alcoholic fatty liver disease) related cirrhosis was considered in patients who were obese and /or diabetic with the presence of steatosis and absence of other causes. However, biopsy was not taken to confirm NASH (non alcoholic steato-hepatitis) or AALD (alcoholic associated liver disease). 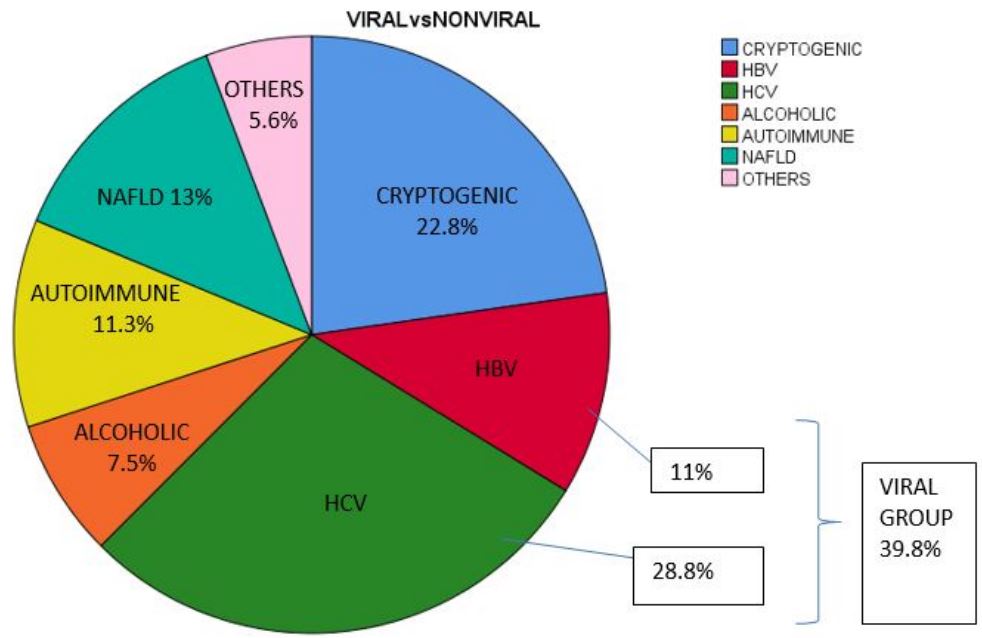 The in-hospital moratility rate at first hospital admission was 5.7% (23 patients). Variceal bleeding (12 patients 52%) and HE (7 patients 30%) were the most frequent causes of in-hospital deaths (table 3). While the proportion of variceal bleeding in viral group (4 patients 66.7%) was higher than that in non viral group, HE showed a higher proportion in non viral group (6 patients 35.3%). 19 patients (82%), who died at first hospital admission, had advanced child pugh score (score B and C). 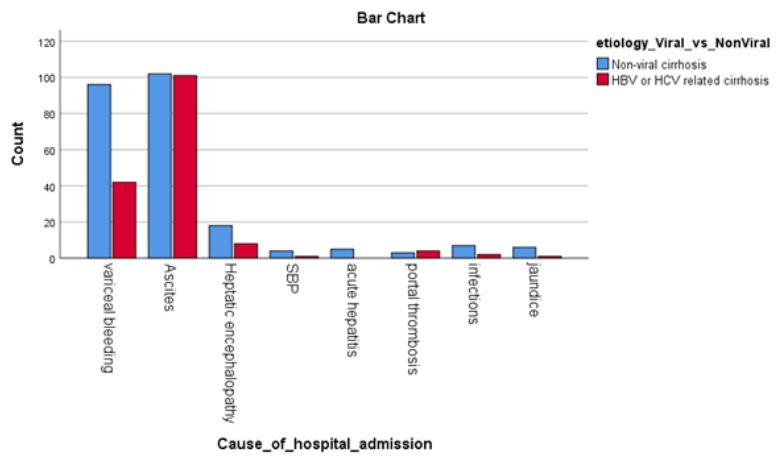 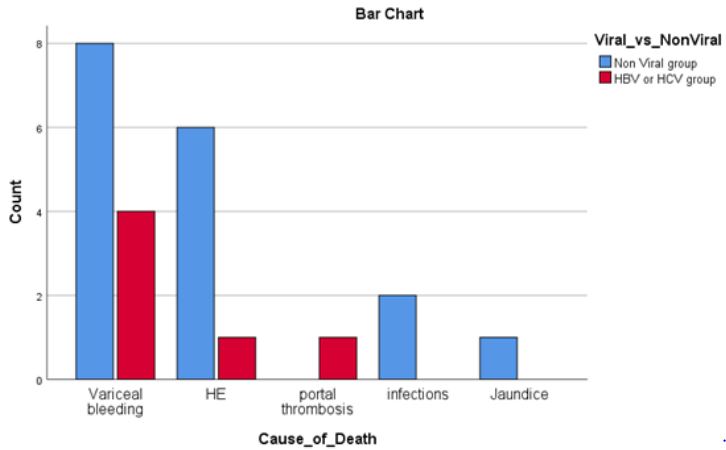 In Morocco, the most common cause of liver cirrhosis is reportedly HCV followed by HBV [6] [7]. However, the prevalence of HCV and HBV-related liver cirrhosis is expected to decrease with the introduction of vaccination, potent antiviral agents and by launching the national campaign to eliminate HCV. The proportion of NAFL related cirrhosis is considerably high in Morocco because it is considered the first cause of cirrhosis in non-viral causes and the second cause of all causes according this study. This is probably due to the 6-fold global increase of the prevalence of obesity over the last 4 decades [8]. Additionally, there is an increase in diabetes in the world among adults [9]. Although there is limited data on the epidemiology of alcoholic liver cirrhosis, it seems that alcoholic associated liver disease is not a prominent cause of cirrhosis.

HCC was not a cause of first hospital admission in cirrhotic patients in this study but it was found in some patients admitted for other causes. The majority of cases who had HCC were admitted for ascites.

In-hospital mortality in cirrhotic patients with acute decompensation is high and it is higher than that of patients with other diseases [10]. The fact that there are numerous factors that determine hospital mortality must be taken into account and they include disease stage, complications, infections, organ dysfunction, acute-on-chronic liver failure, and clinical status upon admission [11-13]. In our patient cohort, in-hospital mortality at first admission was 5.7% and the most frequent causes of death were variceal bleeding and HE. The majority had high child-pugh scores. These percentages are considered high and this may be due to shortage of some important medications such as somatostatin which is fundamental in variceal bleeding. Another cause is that transferring cirrhotic patients to ICU takes time due to shortage of beds especially during the epidemic of the COVID-19 and due to the bad prognosis of cirrhotics with high child-pugh scores giving them less priority. These data suggest the need for new public health measures for the prevention and early and opportune diagnosis of this disease, such as increasing the awareness of screening and treatment of hepatitis C virus, so that the development of complications that darken the outcome in patients with cirrhosis can be prevented and delayed.

Nevertheless, the strengths of this study were that a relatively large number of patients were enrolled in the analysis. Additionally, we investigated the trend of complications and in-hospital deaths among cirrhotic patients who were hospitalized in a university hospital stratified according to viral and non-viral cirrhosis.

Conclusion
In conclusion, the proportions of ascites and variceal bleeding were the highest among causes of first admission in both viral and non-viral related cirrhotic patients. Variceal bleeding was the major cause of in-hospital death in both groups and HE was the second major cause in non-viral group. The adaptation of public health measures directed towards prevention and early and opportune diagnosis of this disease is necessary to prevent the development of complications and improve outcome in cirrhotic patients.

Conflict of Interests
No conflicts of interest are to be declared.