Copyright © 2020 Dr. Chee Ping Wong, et al. This is an open access article distributed under the Creative Commons Attribution License, which permits unrestricted use, distribution, and reproduction in any medium, provided the original work is properly cited.

Antioxidant is a substance that helps to reduce the severity of oxidative stress. Many chronic diseases have been reported related the increasing of free radical and oxidative stress in the human. There is still scanty information on antioxidant property of bee bread at pre and post exercise after short term supplementation. This present study investigated effects of eight weeks supplementation of bee bread on antioxidant status at pre and post exercise among athletes. Twelve male athletes were recruited in this randomised crossover study. For the exercise trial test, subjects were required to run at 60% of their respective VO2max on a motorised treadmill for 90 minutes and immediately followed by a time trial performance. Blood samples were collected at pre and post exercise to determine total antioxidant status (TAS) and F2-Isoprostane. Statistical analyses were performed using descriptive statistic and ANOVA with repeated measures. TAS was significantly higher, whereas F2-Isoprostane was significantly lower in the bee bread trial in comparison with placebo trial after eight weeks of supplementation. This present study found that bee bread supplementation showed positives impact on antioxidant status among athletes.

Introduction
Numerous studies reported that oxidative stress are the major causes of cardiovascular diseases [1-2], cancer [3-4], impaired wound healing [5-6], cataracts [7] and gastrointestinal disorders [8-9]. Reactive oxygen species (ROS) and reactive nitrogen species (RNS) such as hydroxyl radical, superoxide, hydrogen peroxide, nitric oxide and peroxynitrite can damage lipids, proteins and DNA in cells [10]. Reactive oxygen species and reactive nitrogen species are also related to the muscle damage, fatigue and decrease exercise performance. Free radicals will increase with increased intensity of exercise and raised body temperature during exercise. Exercise is postulated to generate free radicals by the production of lactic acid that can convert a weakly damaging free radical (superoxide) into a strongly damaging free radical (hydroxyl) and due to inflammatory responses to muscle damage [11-12]. Antioxidants will scavenge the free radical from damaging the cell and reduce oxidative stress.

Bee products have been used thousands of years ago as a healthy supplement in the traditional medicine. Several studies indicated bee products are antioxidant agent [13-15], anti-inflammatory agent [16], antitumor agent [17] and antimicrobial agent [18]. Natural antioxidants can be phenolic, flavonoid and nitrogen compounds such as alkaloids, chlorophyll derivatives, amino acids and amines [19-20]. Bee product contains antioxidant components such as vitamins C and E [21], flavonoid [22] and phenolic compounds [23]. There were several studies reported ergogenic effects of bee products on sports performance [24-26] and may elicit beneficial effects on bone properties [27]. However, there is still scanty information related to the bee products on antioxidant properties at pre and post exercise after short term supplementation. This present study investigated effects of eight weeks supplementation of bee bread on antioxidant properties at pre and post exercise among athletes.

Methodology
Twelve male athletes were recruited in this study. Subjects consumed 20g of bee bread or placebo for 8 weeks. Before exercise trial test, subjects were asked to refrain from exercise for 24 hours before the exercise tests to ensure that they have adequate rest. Their food diary and physical activity diary for the last 72 hours were also collected. Subjects recorded their 3 days food diary prior to the first running trial and repeated the same diet over 3 days before the days of consecutive test to minimize the differences in muscle glycogen between the trials.

Upon arrival at the laboratory, subject’s nude body weight (after emptying their bladder) and height were measured. An indwelling cannula was inserted into a subcutaneous forearm vein and an extension tube was connected to it to facilitate repeated blood withdrawals. Patency of the cannula was maintained with heparinised saline (Pfizer, Australia). During each blood collection, the first 1mL of the blood sample was discarded and this amount was not included in the blood analysis as it was diluted by the heparinised saline. Eight mL of blood was collected in another 10mL sterile syringe. Approximately 1mL of heparinised saline was injected into the extension tube after each blood withdrawal. A standardised breakfast with 500mL of plain water was consumed by the participants who remained in comfortable sitting posture for 30 minutes. These procedures were standardised for all the subjects. During the exercise trial test, subject was asked to warm up for 5 minutes by running at 50% of their VO2max. Then, the intensity of running was increased to 60% of their respective VO2max during the 90 minutes running trial and followed by a time trial.

Blood samples were taken at pre supplementation, pre exercise, immediate post exercise and 24 hours post exercise to determine total antioxidant status and F2-Isoprostane. All the statistical analyses were computed by using the Statistical Programme for the Social Sciences (SPSS) version 26.0 (SPSS Incorp, United States). The level of significance for all analysis was set at p<0.05. All the collected data were expressed in mean and standard deviation (mean±SD). ANOVA with repeated measures was used to determine the differences of the measured total antioxidant status and F2-Isoprostane parameters over time and between trials. Bonferroni adjustment for multiple comparisons was used to locate the differences when repeated measures analysis of variance revealed a significant main effect of time.

Results and Discussion
Twelve male athletes were recruited in this study. The mean maximum oxygen consumption (VO2max) reflected that the subjects had good cardio-respiratory fitness. Mean body mass index of the subjects was categorised as normal and healthy (Table 1). 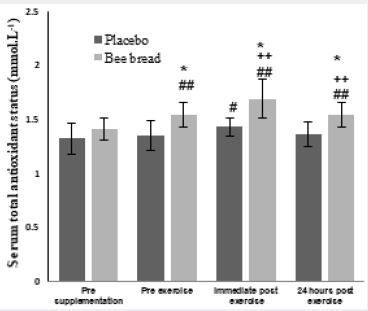 Figure 1: Serum total antioxidant status (mmol.L-1) of the subjects in the two different trials. Data are presented as mean ± SD.

Figure 2: Serum F2-Isoprostane concentrations (pg.mL-1) of the subjects in the two different trials. Data are presented as mean ± SD.