Copyright © 2020 Dr. Fathy Abdolmejed, et al. This is an open access article distributed under the Creative Commons Attribution License, which permits unrestricted use, distribution, and reproduction in any medium, provided the original work is properly cited.

The current retrospective study involves a collection of all patients with post intra vitreal injection (IVI) endophthalmitis in last 10-year period between 2010-2019 in eye department of Tobruk medical center - Tobruk and eye department of Alwahda hospital - Derna. We aim in this study to review the microbiology, clinical characteristics, diagnosis, and management strategies of postintravitreal injection endophthalmitis, by comparing our results with the different studies designs and treatment protocols. There were 9 patients of the after intra vitreal injections endophthalmitis cases. The average age was 70 years, 6 cases were females and 3 cases were males. All of them received post intravitreal Avastin injection for endophthalmitis. There were 8 patients with Diabetes Mellitus (DM), 2 with cardiovascular disease, and one had hepatitis C as a systemic disease. The most common causative organism for post intravitreous injection endophthalmitis was Coagulasenegative staphylococci (CNS) comprising of 56% of the cases while the remaining 44% of cases did not involve any microbial etiology. The outcome of cases managed with pars-plana-vitrectomy (PPV) improved significantly about 60 Letters (>3 Lines) and cases managed without PPV>15 Letters (>3 Lines). The cases of post intraocular endophthalmitis which were diagnosed and treated early with PPV gave a good result and can save the vision. The cases of acute POE (Post-Operative Endophthalmitis) in the first 3 day had significant better function (P value = 0.02).

The post intraocular endophthalmitis is a serious complication, but if treated early with PPV give a good result and can save the vision.

Introduction
Endophthalmitis is a severe intraocular inflammation, due to bacterial or fungal infection, including involvement of the vitreous and/or aqueous humors. It can cause permanent damage to retinal photoreceptors that may lead to partial or complete loss of vision, despite intensive medical and surgical management. For that reason, endophthalmitis is an emergency condition. Endophthalmitis can be caused by either exogenous (micro-organisms diffuse inside the eye through surgery or trauma) or endogenous (through blood from inside the body, through infection or sepsis) [1].

The most common cases of endophthalmitis post intravitreal injection occur in first (3-4) days after operation. In this type the bacterial endotoxins and other bacterial products appear to cause direct cellular injury or indirectly enhance the inflammatory effect [5].

After the introduction of bacteria into the posterior segment, endophthalmitis follows one of two following paths: mild inflammation with effective treatment, which lead to recovery of infection; or severe inflammation, not controlled with treatment, which ultimately leads to vision loss [1].

The most common causes of endophthalmitis are from the patient’s conjunctival flora, contamination of sterilized instruments, disposable supplies, solutions, surgical field, or the intraocular lens [6].

Most patients with post-operative endophthalmitis complain of pain and visual loss, and present with signs of conjunctival injection, fibrinous exudation, hypopyon and vitritis [7].

There are some methods in management of postoperative endophthalmitis, including prophylaxis, medical and surgical.

Prophylaxis: Following are some examples of prophylaxis: Treatment of pre-existing infections: for example: blepharitis, conjunctivitis, of same eye or contralateral eye [8].

Instillation of 5% povidone iodine into the conjunctival fornices, at least 3-5 minutes prior to operations [9,10]. Scrupulous preparation of the surgical site [11,12].

Prophylactic antibiotics: Pre-operative topical fluoroquinolone given in regimens 1 hour to 3 days before operation. But in some studies does not appear to protect against POE [13], while other studies say it is protective if used postoperatively [7], protective patch will be placed over the eye following surgery on the day of surgery [14].

There are four methods to confirm the diagnosis; (1) taking aqueous samples and vitreous samples. (2) conjunctival swabs (3) ultrasound to confirm the posterior segment involvement in the case of the cloudy anterior segment [15]; (4) polymerase chain reaction (PCR), which can detect a small amount of bacterial DNA [16,17]. The use of this technique is not without disadvantages, as there is a false-positive rate of 5%, due to sample contamination [18,19].

Medical treatment of POE: The diagnosis of POE should be prompt and treatment must be initiated as early as possible [20]. Endophthalmitis cases can be treated successfully if properly managed and useful vision can be retained [21].

Systemic medication: Systemic antibiotics: although some studies suggested systemic antibiotic treatment had no effect on the course and outcome of endophthalmitis, however, most recent retrospective studies still advise to use two types of broad spectrum systemic antibiotics to cover both gram positive and gram-negative organisms, the most commonly used antibiotics, for example: vancomycin 2x1g i.v. to cover gram-positive organisms, and a third-generation cephalosporin (ceftazidime) 3x2g i.v. to cover gram-negative organisms, [9,21]. In case of alternative clindamycin 3x 600mg oral plus ciprofloxacin 2x750mg oral or 3x400mg i.v. [23]. Systemic steroid must be used in severe cases of endophthalmitis to limit the destructive complications of the inflammatory process, but should exclude fungal infections.

Intravitreal antibiotics and steroids: [Silver standard]; An intra-vitreal injection of antibiotic should be immediately given to decrease the concentration of most organisms and quickly sterilize the eye [24,25]. The most commonly used antibiotics are ceftazidime and vancomycin [18]. Intra-vitreal administration of dexamethasone may block of the immune response, and decrease progressive damage to the intraocular tissues [26].

Pars-plana-vitrectomy (PPV) is used for surgical treatment: [Gold Standard]; If a vitreoretinal surgeon and equipped operating room are available. The best method of treatment is immediate PPV, to decrease the chance of bacterial toxins to attack the retinal photoreceptors. Clearing the posterior segment and maintenance of transparency and vitreal diffusion, leading to faster recovery of vision [Rehak, Blatz and Meier, 2007] [24].

Materials and Methods
Retrospective study done through collection of the data from the Statistic office in Tobruk medical center- Tobruk and Alwahda hospital-Derna. The recorded data included clinical features of the most serious complication (endophthalmitis) of the post intra vitreal Avastin injection; the data was collected are visual acuity at diagnosis, age and sex of the patients, time of the disease, type, type of management. Additionally, classified were operations protocol, type of organism that caused the disease, lab findings, systemic and local disease of affected patients, and the outcome for the patient through the VA findings. We depend on Ranges of vision loss and reading performance (Tab. No. 1) to a get the result of improvement of vision cases of post intraocular Avastin injection endophthalmitis (improvement of vision > 3 lines i.e > 15 letters on visual chart considered clinically a significant improvement). Statistical analysis was performed using Microsoft Office Excel program. Nominal and statistical significant variables were analysed using t- test for two samples. P value ≤ 0.05 or level (95%) was considered statistically significant. 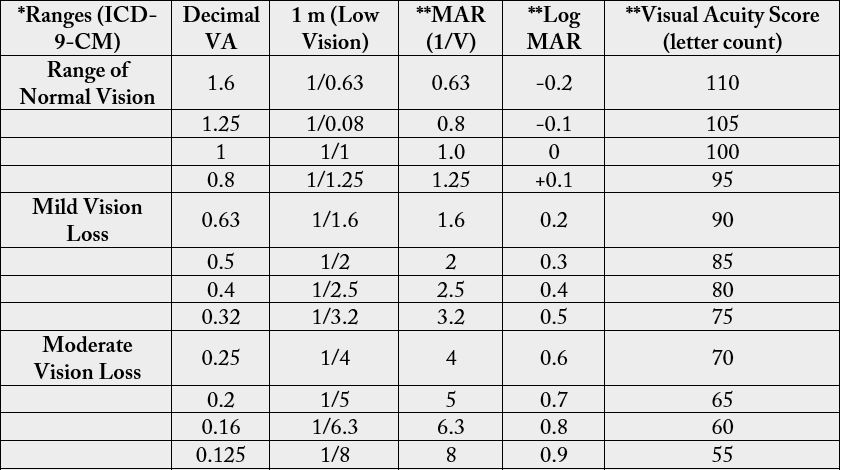 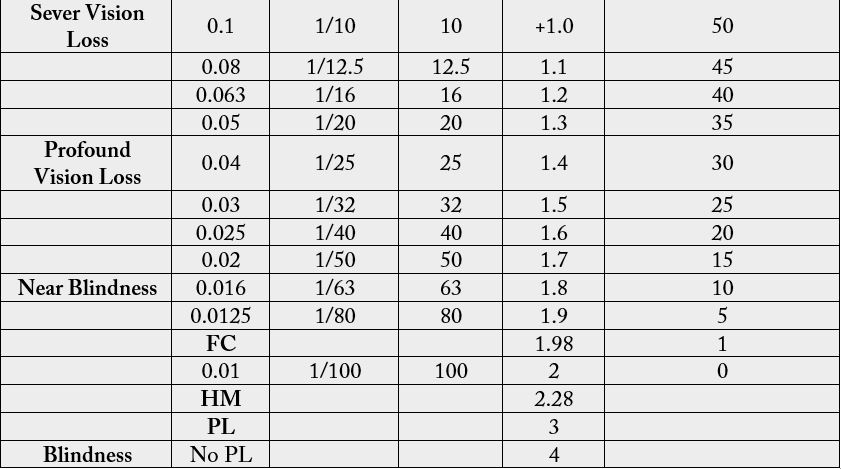 Results
Out of the 9 recorded patients of intravitreal injections endophthalmitis cases, there were 8 patients which received the medication for treatment of diabetic macular edema, one case for treatment of age related macular degeneration (AMD). The average age is 70 years, 6 cases were females and 3 cases were male, all of them were subjected to postoperative endophthalmitis. There were 8 patients with DM, 2 patients had heart disease and 1 patient had hepatitis C as a systemic disease.

There were 8 cases (89%) which complained of pain, redness and blurred of the vision and one case where pain was non-remarkable. There were 5 cases presented with synechia and hypopyon in the anterior chamber and 4 cases without hypopyon, all of the cases were with cells in anterior chamber and vitreous. All the cases cases after intravitreal medication injections were acute, i.e., the endophthalmitis occurs <28 days, most occurring in the first 10 days, and there were 66.7% of cases that occurred at the first 3 days.

The most common causative organisms of post intravitreous injection endophthalmitis is Coagulase-negative staphylococci (CNS), forming 56% of the cases (see the Figure 1).

There were 6 patients (66.7%) from all cases of endophthalmitis post intravitreal injection that presented with near Blind vision and two cases with severe blurred vision and one case with mild blurred vision. Seven patients were managed with PPV + intra vitreous medication injection with washing the anterior chamber. The Log MAR Loss of Vision average at diagnosis was 1.98 and at discharge (after receiving their management) is 1.3, the vision improved significantly after the management by about 30 Letters i.e. improved (> 6 Lines). Although the cases which were managed with PPV had worse visual acuity at time of diagnosis Log MAR 2.1 they had clinically better outcome after the management Log MAR 1.5 than the cases which were managed without PPV (Log MAR at diagnosis 1.7 and 1.3 after the management), i.e. the outcome of cases following PPV improved significantly about 60 Letters (>10 Lines) and than the cases that were managed without PPV >15 Letters (> 3 Lines).

Discussion
Avastin is anti-vascular endothelial growth factor (anti-VEGF), these therapy has improved the quality of life for many patients with diabetic maculopathy, age-related macular degeneration, and other ocular diseases involving neovascularization and retinal edema. In these pathologies, the inhibition of intraocular VEGF is the only therapy that can preserve vision [27].

Adverse events following intravitreal anti-VEGF injections has no relation to underlying ocular disease. The most common complications of intravitreal injection (IVI) are injection site discomfort, subconjunctival hemorrhage, vitreous reflux, transient increased intraocular pressure (IOP) and defect in the vision. The patient may also develop floaters, vitreous or retinal hemorrhage, and retinal detachment [28]. The most serious complication of intravitreal injection is endophthalmitis and loss of vision [29].

Peter Barry, Luis Cordovés, et al. 2013 and Zenith H. Y. Wu, Rose P. S. Chan, 2012 [16,19], advised the PPV procedure which made a significant improvement in case outcome of postoperative endophthalmitis. There were 7 patients managed with PPV + intra vitreous medication injection with washing the anterior chamber, whose vision improved significantly after the management by about 30 Letters i.e. improved >3 Lines. Although the cases which were managed with PPV had worse visual acuity at time of diagnosis they had clinically better outcome after the management than the cases which managed without PPV, i.e. the outcome of cases of PPV improved significantly about (> 10 Lines) than the cases managed without PPV Letters (> 3 Lines).

Conclusion
Although the postoperative endophthalmitis is a sight threatening infection and a destructive emergency disease, the appropriate prophylaxis remains the best way of infection prevention. The delayed presentation, inappropriate management procedures, and severity of causative organism may account for the unfavourable visual outcome. In general post intravitreal endophthalmitis cases can be treatable especially when diagnosed and managed early in time with intravitreal antibiotics and early pars-plana-vitrectomy. Statistically we consist, the cases of acute intravitreal endophthalmitis in the first 3 day had significant better function outcome (P value = 0.024).

Acknowledgement
We would like to thank Mr. Hafez E.L Mansour (Lecturer at Tobruck University) for his help with data retrieval and statistical analysis.