Epithelioid Sarcoma of the Hand: Report of Two Cases

Copyright © 2020 Dr. Yahyaoui Yosra, et al. This is an open access article distributed under the Creative Commons Attribution License, which permits unrestricted use, distribution, and reproduction in any medium, provided the original work is properly cited.

Epithelioid Sarcoma (ES) are rare tumors of unknown histogenesis and display multidirectional differentiation, which is predominantly epithelial. They are usually slow growing, with peak incidence in young adult men and occur predominantly in extremities. We report the cases of two men aged 44 and 41 years with ES of the hand. We analyze through this observation the clinical, histological and therapeutic characteristics of this entity.

Introduction
Epithelioid Sarcoma (ES) was first characterized as a distinct clinicopathologic entity by Enzinger in 1970 [1]. They account for less than 1% of all soft tissue sarcomas [2]. The tumor mainly affects young adults; its principal sites are the fingers, hands, and forearms. ES is the most common soft tissue sarcoma in the hand and wrist. The cornerstone of the multidisciplinary treatment is surgery. Adjuvant treatment including chemotherapy and radiotherapy remains controversial. We report our experience of two men with ES of the hand.

A 44-year-old man, right handed, was referred to the orthopedic department with a 3-month history of a swelling over palmar surface of the left hand.

Physical examination revealed, in the hypothenar region, a nodular mass with hard consistency measuring 3 cm in the greatest diameter. There were no lymphadenopathies or other abnormalities on physical examination.

At the time of diagnosis, the tests to define clinical staging, which included a chest-computed tomography scan, doesn’t reveal metastatic lesions.

He undergoes an excision of the two ulnar rays and elements of the carpal tunnel taking away the unciform bone and the pisiform. 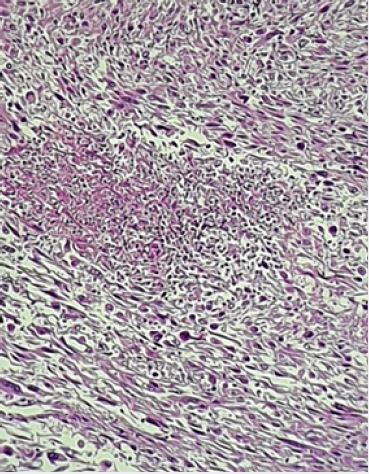 Figure 1: A mixture of spindled and epithelioid cells in a granuloma-like growth pattern with central necrosis (HE X 100). 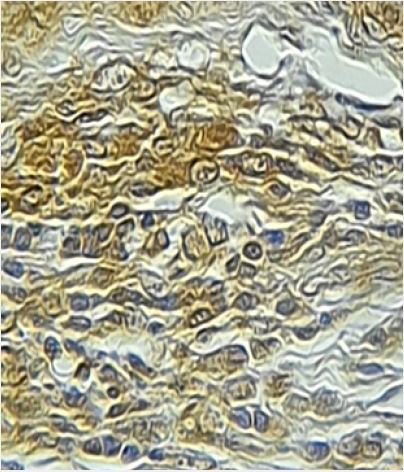 After 2 months, we noted a metastatic axillary lymph node. An axillary lymph node dissection was performed. Analyses of the specimen confirmed the presence of nodal metastasis of ES. The patient received six cycles of chemotherapy with doxorubicin 60mg/m2 and ifosfamide 6g/m2 combination regimen on every three weekly. During the previous follow-up, the patient continuously remained disease free.

A 41-year-old male presented with complaints of swelling in his right thumb for 1-year duration. He underwent excision of the tumor.

Histopathological examination revealed a botriomycoma. However, within a few months, the mass recurred with cortical bone lysis of the base of second phalanx (P). Biopsy of the bud and curettage of the affected bone showed a digital fibro-osseous pseudotumor but a sarcomatous tumor without signs of differentiation wasn’t dismissed. A transP1 amputation of the thumb was performed. The morphological appearance and the immunohistochemical profile were consistent with a grade 2 epithelioid sarcoma (Figure 3). Resection margins were negative. 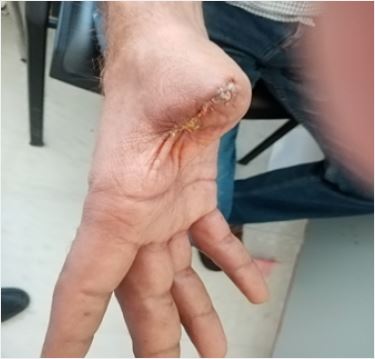 The patient had metacarpal (M1) transcol shortening of the right thumb and right axillary dissection, analyses of specimen confirmed the absence of tumor residue and presence of nodal metastasis (2N+/5N)

The patient was started on chemotherapy consisting of doxorubicin and ifosfamide regimes. Only axillary radiotherapy is programmed owing to the high risk of lymph node extension of this type of sarcoma.

Discussion
Epithelioid sarcoma is a rare sarcoma that affects young adults with an affinity to the distal upper extremity (hand and forearm). Patients often develop multiple local recurrences of long duration, with subsequent metastases in 30 to 50% of cases [1]. ES is most prevalent in adolescents and young adults 10 to 35 years of age, with a median age in the mid-20s. It is uncommon in children and older persons, but no age group is exempt. Male patients outnumber females by about 2 to 1 [3].

It is characterized clinically by a firm and slow-growing tumor with a predilection for the hands, fingers. 54% of cases arise in the distal upper extremities [4]. This was the case of our patients. It usually presents as a no diagnostic papule or a solitary hard nodule as we note with the second case. Ulceration occurs in up to 12% of cases [4].

Recurrence and metastasis are reported in 77% and 45% of patients with ES, respectively. The most common sites of metastasis are the lungs (51%), regional lymph nodes (34%), scalp (22%), and bone (13%) [1,4]. For the second case, we are not yet sure of the metastatic nature of the lung lesion. A control by CT scan will follow.

Proximal location, large tumor size (greater than 50mm), deep location, high mitotic index, vascular invasion, and inadequate initial excision causing local recurrence have been shown to be poor prognostic factors [5]. For the first case, many items of poor prognostic were identified like necrosis and high mitotic index. However, for the second patient we notice the initial wrong diagnosis and the incomplete surgery at the first time. Many mistaken diagnoses of ES have been described in the literature including granulomata, fungal infections, warts, rheumatoid nodules, Dupuytren’s disease, or palmar fibrosis, among others [6].

Radiological imaging studies are non-specific but may occasionally show speckled calcifications within the mass [7]. The definitive diagnosis is based on histopathology.

The cellular elements of ES range from large ovoid or polygonal cells with deeply eosinophilic cytoplasm to plump, spindle-shaped cells and a necrotic core with a granulomatous appearance [8].

Cancer antigen 125 (CA-125) is a high-molecular-weight glycoprotein commonly used for the identification of epithelial ovarian carcinomas and many various neoplasms. Kato and al documented that 91% of patients with ES had positive test results for CA-125. In other soft tissue tumors, CA-125 was negative [13].

Other authors [9,10] have suggested that CA-125 immunoreactivity in the presence of an elevated serum CA-125 level could be a useful tumor marker for the diagnosis of ES and for monitoring the clinical course of patients with ES. In our cases, from now on, we will use this biomarker to control the disease.

Aggressive, radical excision seems to be most effective in preventing local recurrences [14,15]. This is what our patients undergone. Other series has shown that although the rate of local recurrence is not influenced by the type of surgery, the risk of metastases is higher following amputation. This is seeming due to patients with larger, deeper and more locally advanced tumors requiring amputation. However, we could not prove that immediate amputation was likely to affect overall survival [16].

The surgical treatment can be associated with radiotherapy and multiagent chemotherapy, similar to the chemotherapy given for other adult-type sarcomas [17].

The benefits of chemotherapy and radiation therapy for widely metastatic disease are difficult to evaluate [18].

Local recurrence occurs in 63% to 77% of cases, generally proximal to the area of excision. Invasion of lymph node areas in soft tissue sarcomas is rare (3.5%) [19].

However, in the specific case of ES, this involvement seems more frequent, between 11 to 44% depending on the series [16]. Routine use of lymph node dissection or sentinel node biopsy is not supported by the data in the literature.

For these reasons we saw that it is judicious to irradiate the axillary areas for the two patients, as known the safety of tumoral margin.

Conclusion
The principal key that lead the management and prognosis of ES include early suspicion; prompt diagnosis; and aggressive radical excision, which by itself is the most effective treatment in lowering the recurrence rate.

The prognosis of ES is poor because of a high propensity for local recurrence, node metastases, and distant metastases.

Patients gave us written consent for their personal and clinical details.

Written informed consent was obtained from the patient for publication purposes.