Copyright © 2019 Dr. Mehrdad Payandeh, et al. This is an open access article distributed under the Creative Commons Attribution License, which permits unrestricted use, distribution, and reproduction in any medium, provided the original work is properly cited.

The level of an important angiogenic factor, VEGF, was assessed in 62 breast cancer patients and 14 healthy women using ELISA method.

It was observed that the concentration of serum VEGF in the patients with breast cancer was higher than that in normal subjects (P= 0.0003). Also, results show that treatment with Herceptin (P= 0.88) and Letrozole (P= 0.25) cause a decrease in the levels of VEGF in serum; though the difference between VEGF levels in BC patients treated with Tamoxifen and healthy normal controls was significant (P= 0.03).

Treatment of breast cancer patients with common endocrine drugs indicated that Herceptin and Letrozole decrease the concentration of serum VEGF.

Experimental studies propose that tumor progression and metastasis in BC are angiogenic dependent [2-4]. Solid tumors require nutrients, oxygen and the ability to evacuate waste products; and therefore neovascularization is vital to growing beyond 1~3mm [5,6]. Angiogenesis, probably, leads transformation from mammary hyperplasia to malignancy [7,8].

Angiogenesis in the female reproductive tract can be modulates by estrogen generally by effects on endothelial cells [11]. Tamoxifen, the commonly used endocrine therapy for breast cancer, is a partial agonist for the receptor of estrogen. Some studies declared that expression of VEGF mRNA increased in breast cancer cells treated by Tamoxifen [12,13]. Therefore, there is contradicting about efficacy of Tamoxifen as an adjuvant medication for estrogen-dependent BC.

Letrozole, potent third generation aromatase inhibitor, has been revealed to be superior to Tamoxifen in terms of response rates (40% - 60% according to randomized clinical trials) and time to disease progression in postmenopausal patients as the first-line treatment for locally advanced and metastatic breast cancer [14- 16].

Human epidermal growth factor receptor 2 (HER2) amplification and overexpression have key roles in the breast cancer initiation, progression and metastasis. In addition, HER2 signaling up-regulates the expression of VEGF. Herceptin (trastuzumab) is a humanized monoclonal antibody that binds to the extracellular domain of the HER2. Herceptin has been used as a targeted therapy for HER2-overexpressed metastatic BC [17-19].

The aim of this study was to analyze the levels of VEGF in the serum of patients with different stages of breast cancer and correlation with anticancer drugs.

The VEGF concentration in serum was measured using a sensitive two-site enzyme-linked immunosorbent assay (ELISA). Serum levels of VEGF were measured by using the human VEGF ELISA kit from Abcam (Cambridge, UK) according to manufacturer’s instruction.

Microtiter plates (Abcam, Cambridge, UK) were first coated with 80ng of primary anti-VEGFR antibody per well in 0.1M Tris buffer and incubated overnight. Then, the plates were blocked by EIA buffer (50mM Tris, pH 7.5, 0.3M NaCl, 0.1% Triton X-100, 1% gelatin and 1% BSA). The samples and standards were sited in triplicate and incubated for about 16 hours at room temperature. After washing the wells, a biotinylated secondary antibody was added to all wells, and incubation was accomplished overnight at room temperature. β-Galactosidase combined to avidin was added and washed two hours later. To end with, 200μM 4-methylumbelliferyl-β-galactoside (Sigma, UK) in 10mM MgCl2 buffer and 50mM sodium phosphate were added. The amount of fluorescence was measured by ELISA reader, after 40 minutes’ incubation at 37ºC

The statistical analysis was performed using a one-way ANOVA to test for the significance of differences among the groups, and only values of P≤ 0.05 were considered to be significant.

Results
Clinical and demographic characteristics of the breast cancer patients are shown in table 1. Briefly, 59.6% of the patients had invasive ductal carcinoma, 6.4% of them had invasive lobular carcinoma, and 1.2% had ductal carcinoma in situ. Referring to available immunohistochemical data, of the 62 breast cancer patients, 71% of the patients were ER-positive and 29% were ER-negative. About 72% of patients detected with positive PR. The rate of other immunohistochemical markers comprising Ki67+, P53+, and HER2+ was 94.5, 60, and 40%, respectively (table 1).

Table 1: Demographic and clinical characteristics of the studied population. 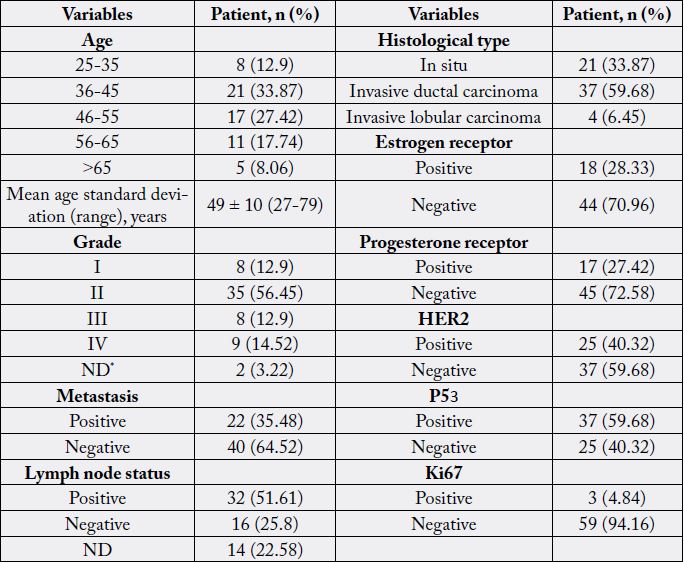 Using ELISA assay, it was observed that the concentration of serum VEGF in the BC patients was higher than that in normal subjects. (P-value= 0.0003) Figure 1 depict distribution of VEGF levels among normal cases and breast cancer patients. Also, we studied the concentration of VEGF in the serum of the patients treated with three common hormonal therapy medications, Tamoxifen, Letrozole and Herceptin. The analysis showed that there was the significant difference in VEGF levels in patients treated with Tamoxifen in comparison to healthy normal controls (P-value= 0.03); although, there were not significant differences between VEGF levels in patients who received Herceptin (P-value= 0.88) or Letrozole (P-value= 0.25) compared to the healthy normal group (Figure 2). 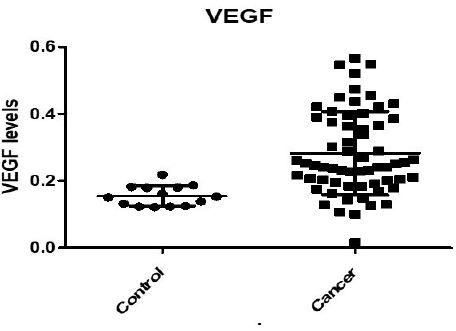 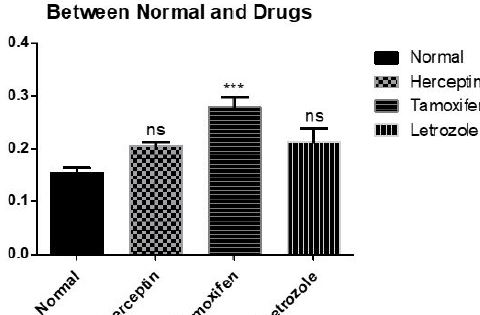 Discussion
Human breast cancer represents a heterogeneous group of tumors that are diverse in behavior, outcome and response to therapy. The management of BC has involved the usage of targeted therapies even before the targets were known [20,21].

Angiogenesis is crucial that contribute to BC growth and metastasis. Vascular endothelial growth factor has been recognized as the major angiogenic factor in different cancers. VEGF increases vascular permeability and also, stimulates angiogenesis and invasion [8]. Foekens et al. indicated reduced survival times in cases with elevated levels of VEGF in the primary tumour, particularly in large tumors and metastatic disease [22]. Similarly, Yamamoto et al. found high serum and plasma VEGF levels in BC cases with larger tumours and metastatic lesion [23].

In different studies, overexpression of VEGF was showed with obvious tumor growth and neovascularization. Studies in animal models revealed that therapeutic blockage of VEGF, to inhibit the growth of the primary and metastatic tumour [9,24].

Anti-angiogenic effect of Tamoxifen on BC has been revealed, but the mechanisms of this effect have not been fully understood [25]. Garvins et al. (2005) [25] indicated in breast cancer cells in vitro that oestradiol reduced extracellular sVEGFR-1 and elevated extracellular VEGF; adding Tamoxifen reversed these effects, significantly. Hence, they suggested that the anti-angiogenic effect of Tamoxifen could be explained, in part, by its effects on VEGF and sVEGFR-1 [25].

Adams et al. (2000) [26] show that VEGF expression was significantly correlated with estrogen receptor status and correlated with tumour grade, inversely; also, they declared that Tamoxifen-induced increases in VEGF may be important in clinical prognosis or associated pathologies [26]. Our results, in contrast, showed BC patients who treated with Tamoxifen had a significant difference in VEGF levels in comparison with healthy controls, it means Tamoxifen has no significant effect on down-regulation of VEGF.

Letrozole has been commonly recommended as an adjuvant therapy for postmenopausal BC patients; though some hormone-dependent BC patients do not respond to Letrozole [27,28]. It has been shown that Letrozole, as a preoperative therapy, in postmenopausal patients with ER+ and/or PgR+ primary untreated BC is more effective than Tamoxifen [14]. Mary O’Neill et al., in vitro, showed that Letrozole, unlike Tamoxifen, enhances the cytotoxicity of both doxorubicin and docetaxel; therefore it seems to be useful prescribed Letrozole with chemotherapy in ER-positive BC post-menopausal patients [29]. Our data indicated that BC patients who treated with Letrozole showed no significant difference in VEGF levels in comparison with healthy controls, in the other words Letrozole could decrease the VEGF levels in BC patients.

VEGF levels have associated with HER2 expression [30]. Expression of VEGF is regulated by HER2 signaling [31]. Forced expression of HER2 can cause up-regulation of VEGF, whereas inhibition of HER2 signaling, through down-regulating the PI3K activity with Herceptin or HER2 siRNA, decreases the VEGF levels [32]. Hui Guan et al (2005) [33] showed that Herceptin, an anti-cancer agent that target HER-2/neu, inhibits both HER-2/neu and VEGF expression in Ewing’s sarcoma cells and enhances their sensitivity to taxol [33]. We showed that Herceptin treated patients showed no significant difference in VEGF levels in comparison with healthy controls, in the other words Herceptin could decrease the VEGF levels in BC patients.

Conclusion
In conclusion, our findings showed that Letrozole and Herceptin are potent anti-cancer drugs in downregulation of vascular endothelial growth factor (VEGF).